The Wright Award goes to the Geisel professor for his service to the College and the nation. 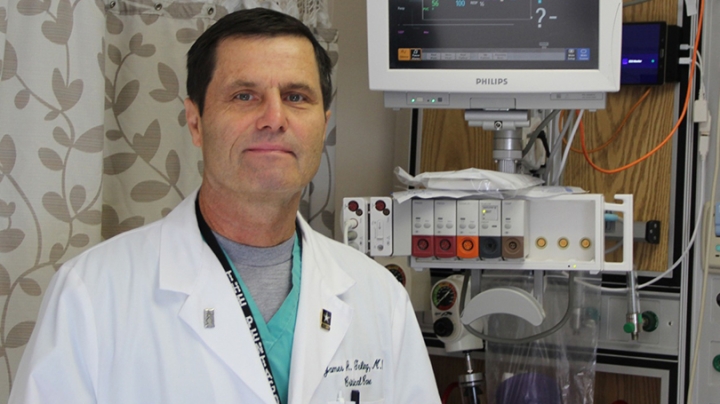 Shortly after Chad Rairie ’16 arrived at Dartmouth, after two deployments to Afghanistan’s Helmand Province with a U.S. Marine Corps infantry unit, he met James Geiling, MPH ’14, at a Veterans Administration briefing in White River Junction, Vt. This encounter at a routine orientation session was instrumental in Rairie’s receiving specialized medical treatments to repair debilitating injuries to both hips that he’d sustained during his deployment.

Geiling, a physician and professor at the Geisel School of Medicine, is also the chief of medical services at the regional VA Medical Center and a retired Army doctor. He worked over many months to make sure Rairie got access to a specialized procedure at DHMC, helping him navigate through the complex institutional procedures of VA services.

It was this kind of care and attention he has given to countless Dartmouth veterans, as well as a distinguished military career that included chief of emergency medical services at the Pentagon during the Sept. 11, 2001, terrorist attacks, that makes Geiling the ideal recipient of the 2016 James Wright Award for Distinguished Service, says Winnie Huang ’92, incoming chair of the Dartmouth Uniformed Service Alumni (DUSA) board.

“He’s a doctor who truly cares about other veterans and he has firsthand knowledge of what the VA is great at and where it struggles,” says Rairie, a member of the Wright Award nominating committee.

“It was really his reaching above and beyond his normal duties. He had no reason to take a personal interest in my care other than the fact that he saw a veteran from Dartmouth who needed some help and he decided that he was in a position to affect my treatment in a positive way,” Rairie says.

Former President James Wright will present the award to Geiling during the Veterans Day Banquet, held from 6 to 9:30 p.m. in the Hanover Inn grand ballroom. All members of the Dartmouth community are invited. The ceremony will include a remembrance of the victims of the 2001 terrorist attacks, including 12 with ties to Dartmouth, says Huang, who chaired the Wright Award nominating committee.

“Dr. Geiling is truly an impressive guy who works tirelessly for veterans at Dartmouth and elsewhere. I’m delighted he is being honored with this award,” Wright says.

“As this year marks the 15th anniversary of 9/11, we are especially grateful to Dr. Geiling, who was responsible for coordinating first responders at the Pentagon on 9/11 as well as during the subsequent anthrax attack. Dr. Geiling’s lifelong contributions exemplify our core values of service-college-country,” Bruschi says.

The Wright Award was established by DUSA to honor Dartmouth’s 16th president, a historian and Marine Corps veteran, for his advocacy of educational opportunities and support for service members. Wright worked with members of Congress to help write the Post-9/11 GI Bill and to create the Yellow Ribbon Program, which today enables tens of thousands of veterans to afford education at private colleges, including many at Dartmouth.

For a full schedule of Veterans Day events at Dartmouth, visit https://www.dartmouth.edu/veterans.