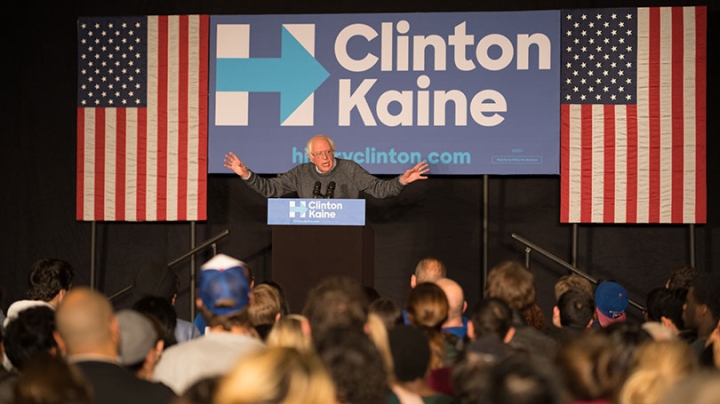 Campaigning for Hillary Clinton, Vermont Sen. Bernie Sanders, along with two top New Hampshire Democrats, made an urgent get-out-the vote appeal to Dartmouth students Tuesday, pounding home the message that their vote could be a deciding factor in electing the next president of the United States and determining which party controls the U.S. Senate.

“This is the most significant election in my lifetime, and it will be in yours for many years to come,” Kuster said.

Had Al Gore won New Hampshire’s four electoral votes in 2000, he could have been president even after losing Florida, Kuster told the crowd, referring to the fiercely debated Florida recount the ended with the Supreme Court calling the election for George W. Bush.

Sanders took the stage as the audience cheered, and thanked his supporters for helping him win the state’s first-in-the-nation primary.

“I thank all of you who worked hard on my behalf in New Hampshire. It is because of victory here that we could take our campaign to the national level,” Sanders said. The strength of that movement put him in position to negotiate “the most progressive Democratic platform in the history of the United States of America,” he said.

Sanders voiced full support for Hillary Clinton, saying she shared his commitment to making college affordable, allowing the refinancing of student loans, increasing the minimum wage, addressing the reality of climate change, “taking on the billionaire class, and standing up for the working people of America.”

The event marked the Clinton campaign’s fifth visit to Dartmouth since the start of primary season. Separately, Hillary Clinton and former President Bill Clinton have each come to Hanover twice.

While New Hampshire’s swing-state status has increased the political intensity of the general election this year, Dartmouth has long been a stop on the primary campaign trail. A long line of presidential hopefuls, both Republicans and Democrats, visited Hanover in the run-up to the February primary.

Alexandra Mena ’20, from Houston, registered as a New Hampshire voter earlier this month. She was not on campus during primary season, she said, so she jumped at the chance to see Bernie Sanders and to hear his thoughts on Clinton before casting her first-ever vote for president of the United States.

Mena did know about Dartmouth’s place in presidential politics before she arrived.

“That’s something that made me interested in trying to apply. I’m here because I’m trying to become more aware of what’s going on,” she said.