Chelsea Clinton Makes a Last-Minute Pitch for Her Mom 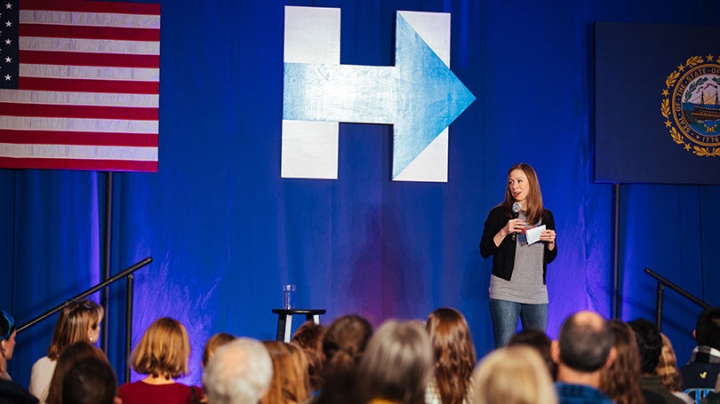 Chelsea Clinton makes a get-out-the-student-vote stop at Dartmouth for her mother’s presidential campaign on Friday. (Photo by Robert Gill)
11/04/2016
Body

Chelsea Clinton brought her mother’s campaign back to Hanover Friday, urging Dartmouth students to “keep talking to family, friends, peers, strangers, over the next four days about what’s at stake in this election.”

In introducing Clinton, Charlotte Blatt ’18, president of the Dartmouth College Democrats, asked Hillary Clinton supporters to join a final push to get out the vote by making phone calls, knocking on doors, and talking to voters.

“I’d like to thank Charlotte for working so hard beside my mom since the day she announced,” Clinton said, noting that Clinton campaign volunteers have knocked on 600,000 doors and made 3 million phone calls in New Hampshire for this election.

“Everything I care about is at risk. Our core values as a country are at risk,” Clinton said. “This is about defeating Donald Trump and electing my mom.”

The Clinton camp and the Democratic party are also keenly aware of the importance of New Hampshire’s four electoral votes, she says.

“Clearly nobody in the Democratic establishment wants a repeat of what happened in 2000, when Bush beat Gore by 7,000 votes in New Hampshire. If Gore had taken New Hampshire’s four electoral votes, Florida wouldn’t matter, and it would have changed the entire election,” she says.

As Nov. 8 nears, the stakes are getting higher, says Associate Professor of Government Joe Bafumi.

“Trump has been closing the gap, and for the first time, in an average of polls, is winning in New Hampshire,” Bafumi says.

“Young people remain strong supporters of Hillary Clinton but they are also least likely to turn out and vote,” he says. “That’s why the Clintons and Clinton surrogates have been spending so much time at Dartmouth and other college campuses in the state.  If they can get Dartmouth students and students on other campuses to vote in high numbers, they can still win New Hampshire.”

While swing-state status has increased the political intensity of the general election in New Hampshire this year, Dartmouth has long been a stop on the primary campaign trail. A long line of presidential hopefuls, both Republicans and Democrats, visited Hanover in the run-up to the February primary.

Now in the final days, with President Barack Obama, Sanders, and Chelsea Clinton campaigning for Hillary Clinton in New Hampshire, the candidate’s daughter made a last pitch at Dartmouth, “If we do whatever we can, talk to as many people as we possibly can, if we do that, we can win.”