With Columbia’s 2-0 win over Cornell on Sunday, Big Green shares the championship with the Lions. 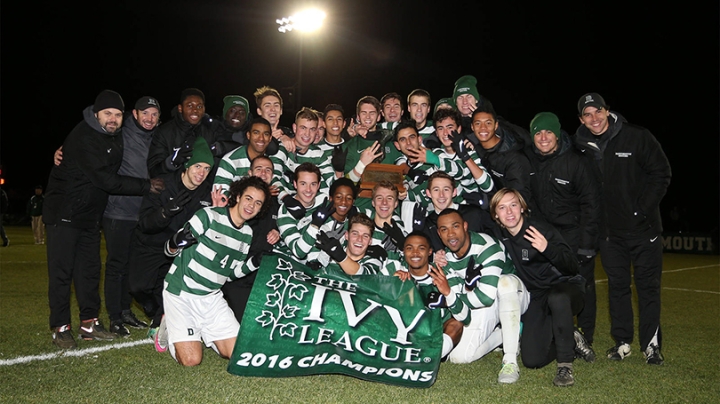 The Dartmouth men’s soccer team clinched a share of the Ivy League title with a 2-0 victory over Brown Saturday at Burnham Field. With Columbia’s 2-0 win over Cornell on Sunday, Dartmouth shares the championship with the Lions.

Since Dartmouth defeated Columbia earlier this season, the Big Green earned the Ancient Eight’s automatic bid to the NCAA College Cup, making Dartmouth’s third consecutive trip to the postseason under Bobby Clark Head Coach of Men’s Soccer Chad Riley. The 2016 Ivy League title is also the third championship for the Class of 2017, which was honored in a ceremony after Saturday’s match.

“You get so into the game at hand that it’s hard to let it really sink in for a little bit, but I’m really proud of the group,” Riley said. “It’s been one of the most challenging schedules in recent years. I think they battled really well and weren’t really given much this year. We’re playing our best soccer now. I knew Brown would bring that out because they’re a really good team. Our league is at a strong point and credit to Brown, they really tested us.”

The team will host St. Francis Brooklyn on Thursday, Nov. 17, in the first round of the NCAA College Cup tournament, set for 5 p.m. on Burnham Field. The winner will travel to Syracuse to face the eighth-seeded Orange on Sunday, Nov. 20. With a victory, the Big Green would potentially face a rematch of last year’s second round match with Syracuse.