Dartmouth Inducts 17 Into Wearers of the Green

The group honors students, alumni, and coaches for their athletic excellence. 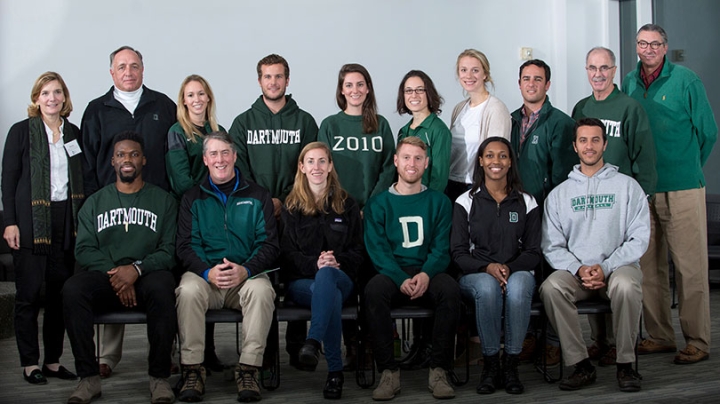 Dartmouth and the Department of Athletics and Recreation inducted 17 new members into the Wearers of the Green in a ceremony after the homecoming football game on Saturday evening. More than 100 people gathered at the Top of the Hop to honor the induction class, including President Phil Hanlon ’77 and Athletics Director Harry Sheehy ’55a.

“At Dartmouth and beyond, you have showcased your talents, demonstrated your commitment to the pursuit of excellence and served as a source of pride for the entire Dartmouth community,” said President Hanlon to the gathering. “And as we honor you today, we remember just how much athletics enriches the Dartmouth experience, both for student-athletes like you, and for passionate fans like Gail and me.

The group Wearers of the Green was created in 1984 to honor students, alumni, and coaches who have met specific criteria for athletic excellence in their respective sports. Previously, a ceremony was held in Boston every five years to induct new members. But since 2014, new members have been inducted on an annual basis during homecoming weekend in Hanover.