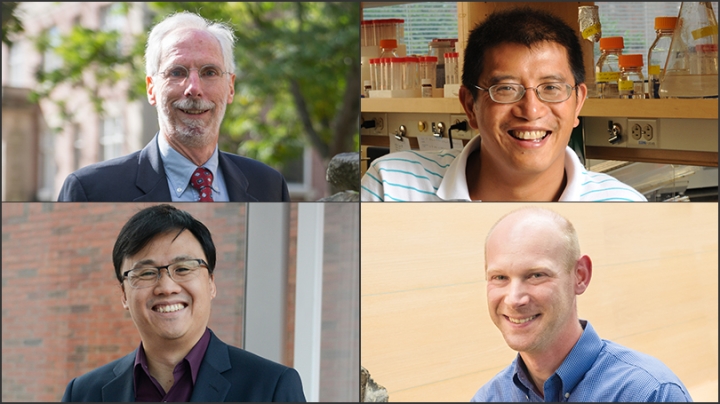 Dartmouth’s new fellows of the American Association for the Advancement of Science (AAAS), clockwise from left: Ross Virginia, Surachai Supattapone, Nathaniel Dominy, and Eugene Santos Jr. (Photos by Eli Burakian ’00 and courtesy of Geisel School of Medicine and Thayer School of Engineering)
11/29/2016
Body

Four Dartmouth professors have been named fellows of the American Association for the Advancement of Science (AAAS), the world’s largest general scientific society and the publisher of the journal Science. In its announcement, AAAS writes, “These individuals have been elevated to this rank because of their efforts toward advancing science applications that are deemed scientifically or socially distinguished.”

Dartmouth’s new AAAS fellows are Nathaniel Dominy, a professor of anthropology and biological sciences; Eugene Santos Jr., a professor of engineering at Thayer School of Engineering; Surachai Supattapone, a professor of biochemistry and cell biology at the Geisel School of Medicine; and Ross Virginia, the Myers Family Professor of Environmental Science.

“The recognition accorded our faculty by one of the world’s preeminent scientific organizations reflects their achievements as scholars, researchers, and teachers,” says President Phil Hanlon ’77. “Their accomplishments have inspired students, advanced knowledge in their fields, and brought accolades to Dartmouth.”

“I am delighted that AAAS has honored these four distinguished faculty members for their groundbreaking research and contributions to the scholarly knowledge in their fields,” says Provost Carolyn Dever.

The new fellows will be presented with an official certificate and a gold and blue (representing science and engineering, respectively) rosette pin on Saturday, Feb. 18, at the AAAS Fellows Forum during the 2017 AAAS annual meeting in Boston.

Dominy was cited by AAAS “for distinguished studies in ecology and functional morphology of humans and nonhuman primates, as well as the integration of fieldwork with mechanical, molecular and isotopic analyses to understand adaptive shifts in primate evolution.”

The anthropologist and evolutionary biologist came to Dartmouth in 2010, shortly after Popular Science magazine tapped him for its 2009 “Brilliant 10” list of scientists under 40. His research is focused on the evolution and dietary ecology of humans and nonhuman primates, with a particular emphasis on living populations in East Africa and Southeast Asia.

“My research philosophy is to integrate tropical fieldwork with mechanical, molecular, and isotopic analyses in order to better understand how and why adaptive shifts in anatomy and behavior occurred during primate evolution,” he says. “I am humbled and honored to be included in such a distinguished group of people. It is a wonderful recognition, and I extend thanks to the many colleagues and collaborators who have inspired, encouraged, and challenged me.”

Santos was cited by AAAS “for distinguished contributions to the field of information and decision sciences, particularly for computational modeling of decision-making under uncertainty with application to human behavior modeling.”

He joined the faculty of Thayer School of Engineering as a professor of engineering in 2005 and teaches courses in computer engineering, operations research, and artificial intelligence.

“I am honored and delighted to have been elected a Fellow of the AAAS,” he says.

Santos works at the intersection of information, cognition, human factors, and mathematics. His focus is on determining the intent behind human decisions and behaviors with an emphasis on how machines can learn complex behaviors such as innovation and creativity.

Supattapone was cited by AAAS “for distinguished contributions to the field of protein misfolding, particularly defining the chemical composition and structure of infectious mammalian prions.”

Folding is a process in which long chain protein molecules reconfigure themselves into shapes in order to carry out specific functions. Prions are specific disease-causing forms of proteins and are responsible for disorders such as Mad Cow disease and Creutzfeldt-Jakob disease, the human form of Mad Cow disease. Supattapone and his group are working toward determining the atomic structure of infectious prions to understand how they function at the molecular level.

“This award directly reflects the talent and dedication of the wonderful young scientists in our lab, as well as the supportive environment for basic research within the department of biochemistry here at Dartmouth,” he says.

Supattapone is a member of the faculty of the Geisel School of Medicine, where he chairs the Molecular and Cellular Biology Graduate Program and directs the Advanced Certificate in Clinical and Translational Research program.

Virginia was cited “for seminal contributions to the understanding of the biogeochemistry and biodiversity of polar and desert soils and ecosystems.”

His current research examines the impact of climate change on nutrient cycling in the polar deserts of Antarctica and the tundra of western Greenland. As director of Dartmouth’s Institute of Arctic Studies, he is active in Arctic policy issues and serves as a lead scholar for the Fulbright Arctic Initiative.

“I am thankful and truly honored by this recognition from AAAS. Research in polar environments is a team enterprise. I have been privileged throughout my career to work with a distinguished group of colleagues from many disciplines and am continuously inspired by an amazing set of Dartmouth students who challenge me and keep the science fresh and fun,” Virginia says.