Faculty, students, and others attempt to sort out the meaning of the election results. 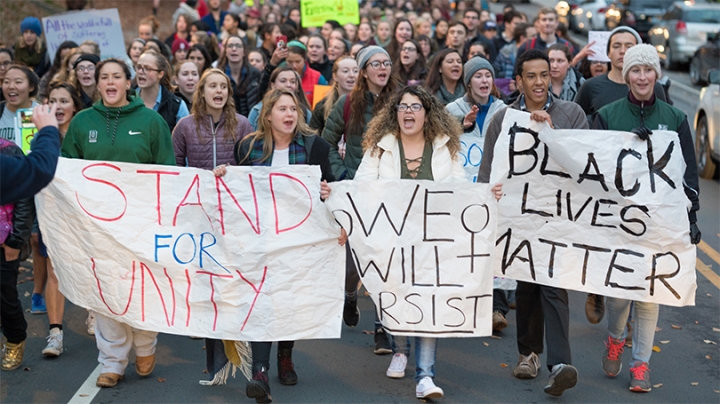 Political observers, students, and much of the Dartmouth community on Wednesday were still trying to sort out the meaning of Donald Trump’s stunning upset of Hillary Clinton and the broad gains of the Republican Party in consolidating control of the U.S. House, Senate, and a majority of governor’s seats, outperforming virtually all pre-election projections.

“The national vote total may not be as far from the polling as some people think, but the state polling clearly underrepresented the Trump vote,” says government professor Brendan Nyhan, who studies political perceptions and applied statistical methods. “It’s a complicated problem, but it turns out that things that have a low percentage of happening, according to our best estimates, don’t have a zero percent chance of happening.”

The fundamentals of this campaign season, following a two-term Democratic president and a relatively weak economic recovery, favored Republicans, he says. “What’s hard to tell is whether these structural factors carried Trump to victory, or whether his message unlocked a new vein of support. It may tell us that Americans are more receptive to a populist, nationalist message than we anticipated.”

Across the campus, many students reacted with shock, with a dozen or so turning out Wednesday for a sit-in on the Green to express their dissatisfaction with the results, while others gathered to talk about the outcome in house community common areas, before classes, or at sponsored discussion groups such as the multi-faith conversation at the William Jewett Tucker Center.

Alexis Colbert ’19 was among those on the Green making known their opposition to President-Elect Trump.

“We have gotten to the point where it’s easy to say that so much has changed and so much has gotten better and we try and push off these social issues like sexism and racism.” Colbert says. “I think the fact that Trump has won makes it very clear that these things are very strong in America and we haven’t gotten as far as we think we have.”

The sit-in started with a handful of students who took to the Green in silent protest in the early morning hours Wednesday.

Later Wednesday, email and social media alerts drew more than 100 people to the makeshift camp, which served as a takeoff point for a spontaneous “walk for love and justice.” The crowd, including students, faculty, and community members, grew to more than 300 as the marchers passed through the Baker-Berry Library, out onto Main Street and down Lebanon Street, holding signs and chanting “Love Trumps Hate.”

Kit Gardner ’17 joined the protesters on the Green Wednesday morning and helped get the word out about the march.

“I think that it was the sense of not knowing what to do last night—watching the election unfold and not knowing what to do with my body or with myself. So as soon as I woke up this morning, after not sleeping many hours, I needed to be with other people who understood the gravity of the situation that we're in,” she said as the crowd moved across the Green just after 4 p.m.

Other students, such as Michelle Knesbach ’17, president of the Dartmouth College Republicans, welcomed the results.

“I’m actually not as surprised as probably the majority of campus. I think that being active in the conservative community, people were more open and more truthful about who they were voting for in the presidential election. I knew there was a large hidden vote in there, not just at Dartmouth but across the country. Of course I’m a little bit surprised. We expected the polls to be wrong, we just didn’t expect them to be wrong by this much.”

She is hopeful that the country can come together after the bitter campaign. “I’m looking at his acceptance speech last night and hoping that he will be as compromising in terms of unifying the country as reflected by the speech.”

Turn out in New Hampshire set a record at an estimated 72 percent, Secretary of State Bill Gardner told the media. In Hanover, high student turnout and enthusiasm for the process were much in evidence on Tuesday.

At the Hanover High School polling station, students were taking advantage of New Hampshire’s same-day voter registration process. By 10:30 in the morning, election volunteers already had a thick stack of registrations, mostly, they said, from Dartmouth students showing up to vote.

Among those registering to vote for the first time was Katherine Dong ’17, voting in her first presidential election. “It’s exciting, especially since being in New Hampshire we get so many candidates visiting all the time. Also we have so many politically active peers—it’s really interesting to see both sides and to feel the energy on campus and with your friends.”

Amir Taree ’17 agreed. “Voting is one of the most important rights that we have as citizens. But I think this election is especially important. We have a potentially very dangerous option that could happen, and I felt more of a moral drive to come and vote, rather than just for my civic duty.”

In Ohio, Republican Sen. Rob Portman ’78 retained his seat by a comfortable margin over former Ohio Gov. Ted Strickland. Portman’s victory comes after his public breaking with Trump in October. Portman congratulated Trump on his eight-point victory in the swing-state of Ohio, and vowed to work with the next administration to overcome the “dysfunction in Washington.”

A group of students took to the Green Wednesday to make known their opposition to President-Elect Trump. (Photo by Eli Burakian ’00)

Both Trump, in his early morning victory speech, and Clinton, in a concession speech midday Wednesday, called for reconciliation after the divisive presidential campaign. President Barack Obama pledged Wednesday to help Trump through the transition.

“Now it’s time for America to bind the wounds of division,” Trump said.

Clinton conceded the election Wednesday saying, “We owe him an open mind and a chance to lead.”

She also called on her supporters to continue to work for the issues they believe in. “This setback hurts, but please, never stop believing that fighting for what’s right is worth it,” she said.

The question of how to overcome the partisan atmosphere of current American politics remains open, said Russell Muirhead, the Robert Clements Associate Professor of Democracy and Politics.

“For either party to build a durable governing majority will require some kind of appeal that reaches both minorities and white men,” he said. “The party that can do that can govern. Right now it looks like the Republicans can govern, but their hold on the institutions of government is exceedingly fragile.”

The Election and the Aftermath

The Nelson A. Rockefeller Center for Public Policy will hold a public forum titled “Finally, It’s Over: The 2016 Election and Its Aftermath,” on Thursday, Nov. 10, from 5 to 6:30 p.m. at the Rockefeller Center, Room 003. Panelists include faculty and state Republican and Democratic party representatives.