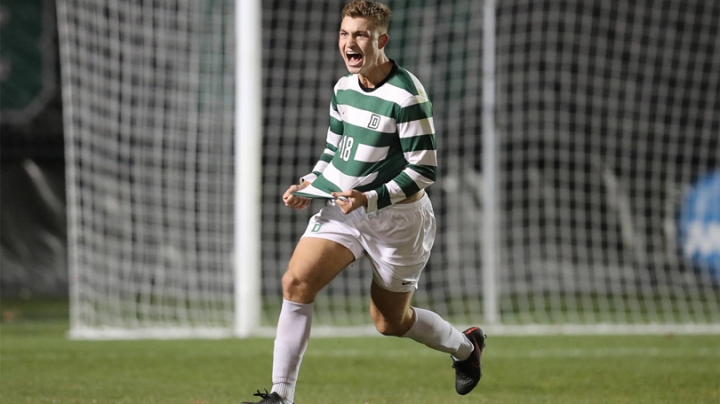 Matt Danilack’s strike in double overtime extended the Dartmouth men’s soccer team’s season, as the Big Green took down St. Francis Brooklyn, 1-0, to advance to the second round of the 2016 NCAA College Cup.

With the victory, Dartmouth improves to 9-4-5, while the Terriers drop to 12-5-3 to conclude their season.

The Big Green players were no strangers to overtime games as Dartmouth competed in its seventh overtime game of the season, and are also no strangers to their next opponent, Syracuse. Last season Dartmouth fell to the Orange in the second round of the College Cup in a hard-fought contest in the Empire State. Thursday night’s win earned this year’s team another crack at eighth-seeded Syracuse at 2 p.m. Sunday in New York.

“Obviously we’re ecstatic to be able to move on,” Chad Riley, the Bobby Clark Head Coach of Men’s Soccer, says. “Credit to St. Francis Brooklyn, we always knew it was going to be a tough game. I thought they played very well and they were very organized. I’m very proud of our guys. I think first round NCAA games are never easy and I’m proud of the way they stuck to the plan and kept pushing until we got our break in the second overtime.”