“We think of ourselves as protectors of the water,” says Augusta Terkildsen ’19. 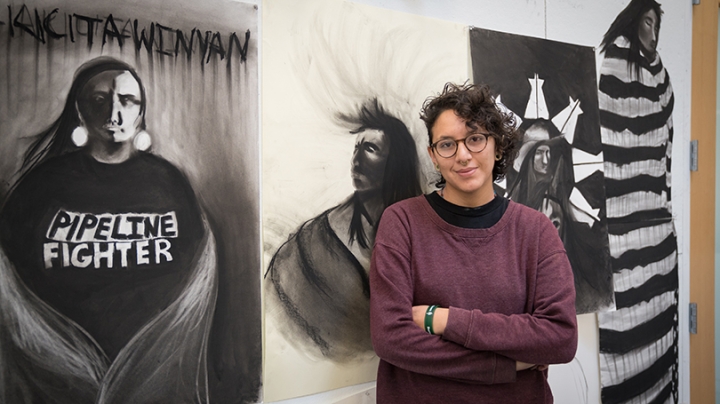 Augusta Terkildsen ’19 drew portraits of members of her tribe, the Oglala Sioux, who have joined the opposition to the Dakota Access pipeline. Terkildsen plans to spend part of her winter break at the protest site near the Standing Rock Reservation in North Dakota. (Photo by Eli Burakian ’00)
11/29/2016
Body

At the beginning of fall term, Augusta Terkildsen ’19, who lives on the Pine Ridge Indian Reservation in South Dakota, faced a decision. Should she return to Hanover for her sophomore year at Dartmouth? Or should she join members of her tribe, the Oglala Sioux, who, with others, are trying to block the proposed Dakota Access oil pipeline, which opponents consider a serious threat to the region’s drinking water?

“Others call us protesters,” says Terkildsen. “We think of ourselves as protectors of the water.”

To Native Americans, she says, water is not just a resource—it’s an ancestor.

The conduit proposed by Energy Transfer, a Texas-based corporation, would stretch 1,127 miles from an underground deposit in North Dakota southeast through South Dakota and Iowa into Illinois. The Army Corps of Engineers granted final permits in July, but the Standing Rock Sioux Tribe filed a lawsuit, saying the pipeline, planned to run under the Missouri River, would threaten the water supply and destroy burial and prayer sites as well as culturally significant artifacts. For several months, Native Americans and their supporters have been camping out about a mile from the Standing Rock Reservation in North Dakota, trying to halt the pipeline’s construction. There have been dramatic clashes with law enforcers. Hundreds have been arrested. In mid-November, the Army Corps announced it was delaying construction pending further analysis.

“My family has always been involved with Native American rights,” says Terkildsen. “I joined the forefront along with a lot of my relatives. I saw it grow from five or six tents to thousands. I tried to stay on the front lines as long as I could, but I obviously had to come to school.”

Back on campus, Terkildsen enrolled in “Native Peoples in a Changing Global Environment,” a course taught by Assistant Professor Nicholas Reo that allowed her to research environmental issues, including the Standing Rock controversy.

“What makes this class so great is that natives are applying what we are learning to our real world,” says Terkildsen. “I have a hard time being here and not at Standing Rock, but I have to remind myself that I am doing something important, pursuing higher education.”

Terkildsen has brought her experiences at Standing Rock into her drawing class as well, making charcoal portraits of tribal members she photographed during the summer. One shows her sister on a horse, the tribal flag surrounding her like a halo. In another large drawing, a woman is wrapped in the American flag, upside down. “To us, an upside-down flag is a symbol of distress,” says Terkildsen.

None of the drawings show the confrontations with police that have been documented in the media.

“What I want people to see is the feeling in my people,” Terkildsen says. “When I look at people being sprayed by tear gas it makes me emotional, but I see my people as strong and resilient, so I draw them as I see them.”

On the last day of Reo’s class, the text under discussion was Moral Ground: Ethical Action for a Planet in Peril, edited by Kathleen Dean Moore and Michael P. Nelson. As the students talked about the moral foundation for environmental activism, Reo stepped outside the room to explain his aims for the course.

“I tell the students, I am not trying to get you to have a particular perspective and you are not being graded on telling me what I want to hear. That’s not what this class is about. It’s about critical thinking,” he says.

The Standing Rock controversy became a thread of discussion in Reo’s course because several students, in addition to Terkildsen, were either closely following or had been involved in the demonstrations. Every Friday, Terkildsen gave an update on the controversy, sometimes showing videos from the site. When Reo and Terkildsen were invited on the public radio show “On Point” for a segment about the pros and cons of the Dakota Access pipeline, Reo turned their preparation process into a class assignment.

“I didn’t tell the class, at first, that we were going on the show, but I gave them background materials and asked them to come up with two or three messages that they would want to convey, if they were interviewed in the media.”

Outside of class, Terkildsen attended rallies on campus in opposition to the project. Now that the term is over, she’s heading home to make her voice heard at Standing Rock. “I’m packing snow boots and warm jackets,” she says, “because winter is setting in.”

In late November, videos from news outlets showed police at the Standing Rock protest site spraying water guns in frigid temperatures. Law enforcers said they were trying to extinguish fires set by demonstrators. Project opponents, who reported being hit by rubber bullets and teargas as well as water guns, said they started the fires only to keep themselves warm.

Citing harsh winter weather, North Dakota Gov. Jack Dalrymple has issued an evacuation order, saying that “any person who chooses to enter, re-enter, or stay in the evacuation (area) does so at their own risk.”

About 2,000 members of a group calling itself “Veterans Stand for Standing Rock” plan to show up in early December to serve as human shields between protesters and law enforcement.

Terkildsen knows she will face risks at the encampment, but nevertheless intends to rejoin the demonstration. “I’ll be running medical supplies, and taking information from camp to camp, doing as much as I can without getting into trouble with police,” she says.