The honor society recognizes the top grade earners in this year’s graduating class. 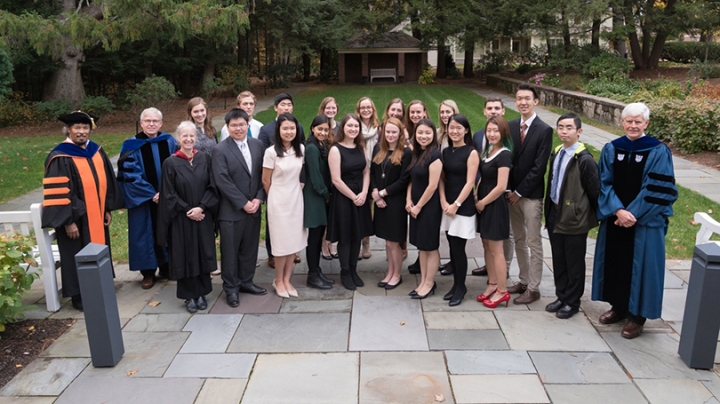 Twenty seniors—the top grade earners in the Class of 2017—were inducted last month into Dartmouth’s chapter of Phi Beta Kappa. The ceremony took place at the chapter’s 229th annual meeting on Oct. 24 at the president’s house.

The criteria for election to Dartmouth’s chapter are rigorous: To be eligible, students must hold one of the top 20 cumulative grade point averages in their class after completing eight terms within three years of matriculation.

“I am extremely proud of the accomplishments of these 20 Dartmouth students,” said Kate Soule, secretary-treasurer of Dartmouth’s Alpha of New Hampshire chapter, president of the national Phi Beta Kappa Society, and director of Dartmouth’s Arts and Sciences Finances and Research Administration. “Their hard work and intellectual rigor has allowed them to perform at the top of their class, not just in their chosen disciplines but across the liberal arts curriculum.”

Kate Soule, secretary of the Dartmouth chapter of Phi Beta Kappa, addresses the new members of the chapter during an Oct. 24 ceremony. Seated at the table with Soule are, from left, Professor Dennis Washburn, Professor Jay Hull, and Professor Keith Walker. (Photo by Eli Burakian ’00)

Frederick Schauer, ’67, the David and Mary Harrison Distinguished Professor of Law at the University of Virginia, was elected to alumni membership. Both Farid and Schauer will be officially inducted at the society’s spring meeting.

The chapter also gave the Phi Beta Kappa Sophomore Prize to seven members of the Class of 2018, an honor that recognizes students with the highest grade point average after completion of five terms.

Founded in 1776 at the College of William and Mary to advocate for and recognize excellence in the study of the liberal arts and sciences, Phi Beta Kappa has 280 chapters on college and university campuses and over half a million living members. Dartmouth’s chapter, the fourth oldest in the nation, was established in 1787.

The following students were inducted to Phi Beta Kappa, Alpha of New Hampshire, on Oct. 24: