The student veterans in the Class of 2020 say they feel both welcomed and challenged. 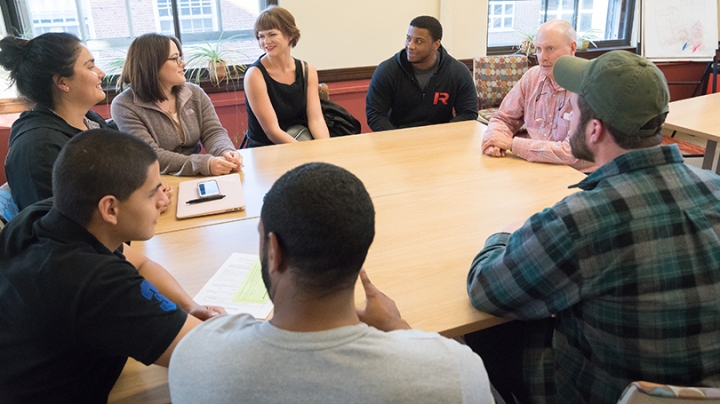 This week, Dartmouth will honor the nation’s military veterans with several days of events, including a veterans’ panel discussion at the Tuck School of Business, a sled hockey game pitting Tuck veterans against a team from the White River Junction VA Medical Center, a Veterans Day remembrance breakfast at the Hanover Inn, a ceremony on the Green, the fifth annual veterans banquet, and the 241st Marine Corps birthday ball.

President Phil Hanlon ’77 reminded the College community in a recent email that “those of us who haven’t served owe a special debt of gratitude to the men and women who have answered the call of duty for the benefit of our country. So I encourage you to take advantage of this special opportunity to learn more about their experiences and to honor their contributions to our nation.”

Stephen Fraser ’20, a member of Dartmouth’s Veterans Posse, could not attend the Friday Nov. 4 meeting because he was away from campus. (Photo courtesy of Stephen Fraser)

Talking about his experiences comes easily to Stephen Fraser ’20, a 23-year-old from Colorado who served in the U.S. Marine Corps before entering Dartmouth this term.

Along with nine other veterans in his class, Fraser was recruited through the Posse Foundation, a nonprofit organization that finds qualified veterans and helps them apply to selective colleges and universities. (It’s one of several resources for veterans on campus.) Dartmouth provides Posse veterans with full scholarships, mentoring, and academic support. Until he joined Posse, Fraser thought going to an Ivy League school was beyond was his reach, having been raised by a single mother who never attended college and who could not afford tuition for him.

A sergeant, Fraser served on Marine ships off the shores of Israel, Jordan, Bahrain, Dubai, Singapore, and the Philippines. He never saw combat. But one of his friends did, and lost his life stepping on a land mine in Syria.

“That’s why I wear this bracelet with his name—Jack Shirley—on it,” says Fraser, slipping a metal band off his wrist. “Here I am—I never served in combat, and yet I got all kinds of accolades, and this amazing opportunity to come to Dartmouth. But Jack was so motivated he fought with the Kurds in Syria, got bad PTSD, and yet went right back into battle. Much has been given to me, and I really owe it to my brothers, and to Jack, to make the most of it.”

Fraser aspires to a career in finance (He recently attended a networking event for veterans on Wall Street), and he also has political ambitions. He’s gregarious. “It can take me an hour to walk from Baker Library to Berry because I run into so many people I know, and I just talk their ears off.”

On most Fridays, Posse veterans get together with their mentor, Carl Thum, director of the Academic Skills Program, to talk about their transition to college life. At their Nov. 4, meeting, the news was good. A few are finding math challenging, but overall, the students are happy to have their mettle—and their study skills—tested.

Jhon Ortiz ’20 says Dartmouth classes are very different from those he took at a community college. “Here they want you to be critical of the information you are given—not just taking everything in and believing it, but challenging what you are being told.”

Karla Rosas ’20 has been learning Arabic, and it hasn’t been easy—“like having my mind re-wired”—but she’s “happy to face obstacles. I came to Dartmouth to be challenged and grow as a student and individual, and I definitely think I’m on the right path.”

Posse members say they don’t want to be singled out on campus for their military service. They want to feel woven into the College community, not set apart from it. But this Friday at 11 a.m., when the Baker Tower Bells ring out military service hymns, Nataly De Freitas ’20 says she’ll make a point of going outdoors. “It will be so nice to stand on that beautiful Green, and just listen.”