Rick Mills: Funds to Be Redirected to Academic Mission 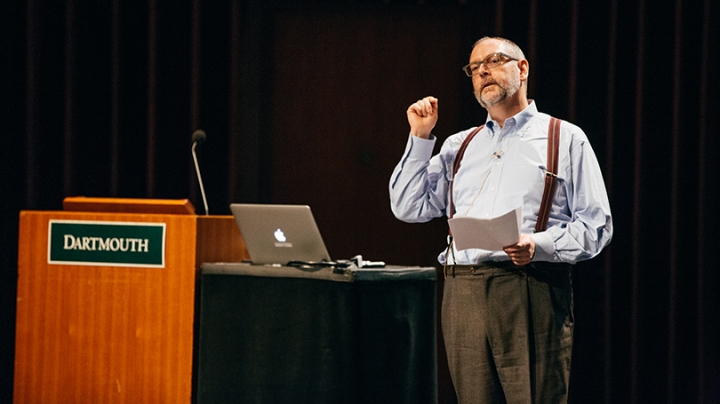 As Dartmouth begins its annual process to develop the operating budget for the next fiscal year, it will focus on aligning its spending with the institution’s academic mission in order to support academic priorities that allow the College to attract and retain the brightest students and the most talented teacher-scholars.

This work includes redirecting $20 million to $25 million from non-academic spending to the academic budget in the next four years, Executive Vice President Rick Mills told the audience at a community town hall meeting on Nov. 2.

Mills said financial planners hope the reductions in non-academic spending will come from various areas, with layoffs being last on the list of possible options. Still, Mills said, he can’t rule out decreasing the number of non-academic positions.

“I want to be honest with all of you. Yes, there probably will be some positions as part of this process that exist today that don’t exist in two, three, four years,” he said.

Not filling vacancies and possibly offering early-retirement programs are among the ideas under discussion. Mills said targets for non-academic spending reductions will be sent to all divisions by the end of next week. He told the approximately 100 people at the meeting in Spaulding Auditorium that planners want “as much input from the bottom up as we can possibly get in terms of where the savings can come from.”

The budget reallocation is necessary to accomplish key academic priorities, including competitive compensation as well as renovation and renewal of some aging academic buildings. The reallocation is set to begin in the next fiscal year, which starts July 1, 2017.

President Hanlon has emphasized that the College must continuously make investments to maintain its standard of academic excellence and create an environment for students and faculty in which learning, investigation, and innovation can flourish.

“Our traditional sources of revenue—philanthropy and endowment returns, tuition revenue and grants—are under pressure. To support ongoing academic investment, we are reviewing spending in non-academic areas with an eye toward identifying expenses that can be reduced or eliminated in order to be reallocate funding to academic priorities,” Hanlon told Dartmouth News.

He said financial planners at Dartmouth—and in higher education across the country—are projecting shrinking revenue streams well into the future. University endowments are expected to grow by smaller percentages than they did at the beginning of the decade. For the fiscal year ending June 30, the College’s endowment investments lost 1.9 percent, which was within the same range as the year-end results of Dartmouth’s peers.

Mills said that the endowment exists not just to fund today’s priorities, but as a source of financial health and stability for future generations. It is, he said, the foundation upon which the College builds programs to pursue excellence and strategic priorities for both the present and the future.

Also limiting on the income side is Dartmouth’s goal of keeping tuition increases at or below the annual rate of inflation. In addition, the College does not expect to be able to continue raising unrestricted funds—such as the annual Dartmouth College Fund—with the same annual rates of increase the program has seen in the past decade.