The students are answering a call to action from “Plate of the Union,” a new advocacy group. 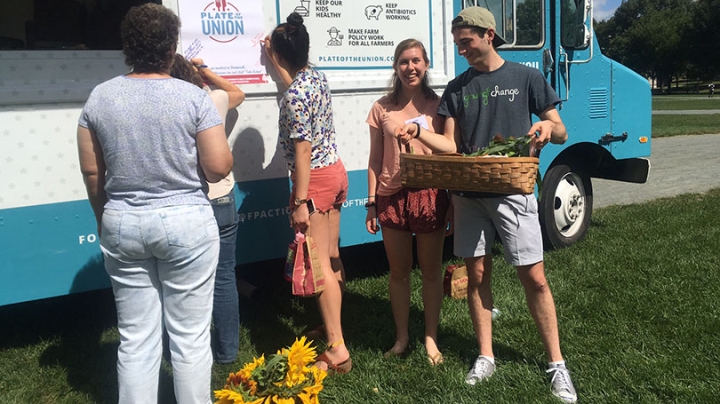 At right, Oliver Edelson ’18 and Maddie Koehler ’17, members of Growing Change, campaign for a national food policy in front of the Plate of the Union food truck, which made a stop on the Green as part of a national college tour. (Photo by Charlotte Albright)
11/04/2016
Body

Oliver Edelson ’18 is anxiously awaiting the outcome of Tuesday’s election. He says one of the most important things the next U.S. president can do is fix the nation’s “broken” food system.

That’s also the mission of a new national organization called Plate of the Union, which is calling for the reform of food and farm policies at the federal level. Taking its campaign to college campuses, Plate of the Union held a competitive grant competition, and Dartmouth’s Growing Change, a student organization, was one of four finalists nationwide. Led by Edelson, the group won $2,500 to fund a series of campus events exploring ways to make healthy, locally grown food more affordable and accessible while improving the lives of farm workers and mitigating climate change.

The first event, which took place last summer, was a community dinner and conversation at the College’s organic farm. “While we anticipated an attendance of 30, we easily more than doubled that,” said Edelson. “And it wasn't only students—professors and community members also joined us to collectively imagine an ideal food system.”

Later in the summer, the students hosted a screening of A Place at the Table, a documentary that tells the story of three Americans who maintain their dignity as they struggle to find enough to eat.

In early September, the Plate of the Union food truck came to the Green as part of a national road trip. “Growing Change” members served up fresh produce from the organic farm, talked to passers-by about the politics of food, and gathered signatures on a petition that will be delivered to the next U.S. president. It calls on elected leaders to “stand with working families, protect food and farm workers, keep kids healthy, keep antibiotics working, and make farm policy work for a farmers.”

Those same topics topped the agenda at the culminating Plate of the Union event, a panel discussion in October called “Reimagining the Future of Our Nation’s Food.” Panelist Laurie Ristino, director of Vermont Law School’s Center for Agriculture and Food Systems, lamented that candidates rarely discuss on the campaign trail how best to create and support an agricultural system that is good for workers and for consumers.

“This has been a crazy election,” Ristino said. “But the next farm bill is coming and everybody at the local, regional, and national level is already talking about it. It’s critical that like-minded organizations come together and don’t abdicate control of that major omnibus opportunity to shift our dialogue nationally.”

Edelson’s environmental studies professor, Sherman Fairchild Distinguished Professor in Sustainability Science Anne Kapuscinski, chairs the board of directors of the Union of Concerned Scientists, a partner in the Plate of the Union campaign. She favors fewer government subsidies for large food producers and more help for small-scale organic farmers. “We really have to create pressure at the federal level so that we can remove these perverse subsidies,” said Kapuscinski. “Industrial meat shouldn’t be that much cheaper than local organic meat, but it’s cheap only because of billions of dollars of subsidies supporting it.”

Kapuscinski believes that grassroots groups like Plate of the Union can drive reform—especially on college campuses, where students are concerned about climate change and want to promote more sustainable living. “What makes me hopeful,” Kapuscinski said, “is that finally all these groups are realizing that in order to have an impact they need to get much better organized so politicians can no longer ignore them.”

About the Plate of the Union campaign, Edelson said it would not have been possible without help from Kapuscinski and the other members of “Growing Change.”

“I had an incredible experience leading the campaign because I got to hear from so many different people who approached food systems from unique angles,” he said.

Apart from the Plate of the Union grant, the “Growing Change” students are also trying to educate younger people about where their food comes from. Each week they lead hands-on activities for fourth-graders at Dothan Brook Elementary School in Hartford, Vt. A recent lesson was about the water cycle that helps edible crops grow in the school’s garden.

This winter, Edelson will take his advocacy work to a higher level, interning for the Union of Concerned Scientists’ food and environmental team in Washington, D.C.