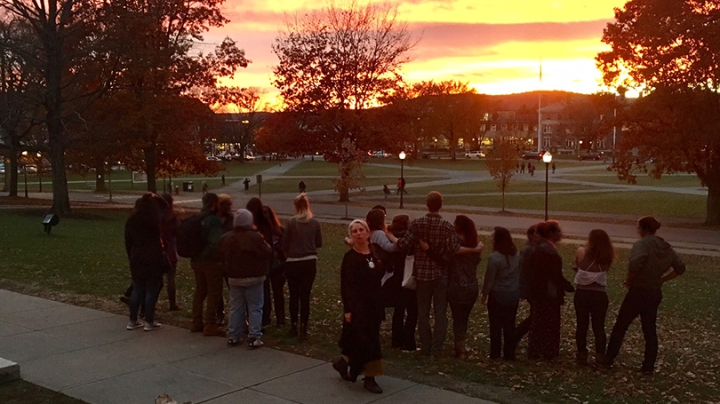 Watching the sun set over the Green are Lecturer Pati Hernández (center) along with students and teaching assistants in her class “Telling Stories for Social Change” and visitors from Valley Vista, a Vermont inpatient treatment center for alcohol and drug addiction. (Photo by Charlotte Albright)
11/14/2016
Body

Storytelling can empower people in crisis to change their lives. That’s what social activist and Dartmouth lecturer Pati Hernández believes. After coming to the United States from Chile, Hernández founded a nonprofit program called “Telling My Story: Reclaiming Voice Through Art,” which she and her many collaborators have taken into prisons and rehab centers. It’s become the foundation for an unusual course at Dartmouth called “Telling Stories for Social Change.”

Each week, students spend one class session on campus, discussing theoretical writing about social change by authors including Paulo Freire (Pedagogy of the Oppressed). But many students say the most meaningful learning happens when they leave campus and get to know inmates and others whose lives have been shaped by poverty, class structure, addiction, and incarceration. One fieldwork site is Valley Vista, a residential drug and alcohol addiction rehabilitation center in Bradford, Vt. With women residents, students participated in arts workshops culminating, in late October, with an eclectic performance piece called Our Cleansing Tears of Our Temporary Yesterday.

“Theater,” says Hernández, “is really a way to bring us all together. Arts are put to the service of a situation.”

Jaclyn Verzuh ’19 took the course and participated in the performance because she wanted to understand systems of power and oppression. “I think that spoke to me—particularly as a queer person, but also just as someone who has always wondered why things are the way they are.”

Each week at Valley Vista, Verzuh and about 10 classmates listened to women tell their life stories, creating what Hernández calls “a talking wall”—a colorful mural displaying pithy statements about the obstacles the residents face and the hopes they have for recovery.

“There is more to me than my addiction,” they painted on the wall. “Stand up to stigma.” “Addiction doesn’t discriminate.” “I’m dying to live, not living to die.”

The wall provided an eye-catching backdrop for the end-of-term performance, which began with the steady beat of “drums”—actually overturned drywall buckets—played by percussionists led by Hernández. A troupe of residents and Dartmouth students, wearing black leotards and rainbow-colored scarves, danced.

Then came a series of skits. In one, a woman made the hard decision to enter a rehab center, but as she waited for parents to pick her up, she died from an overdose. In another, a recovering alcoholic tried to stay sober through a Thanksgiving dinner where everyone else in her family got drunk. A third scene pulled back the curtain on an unhealthy romantic relationship between two women who relied on each other to feed their drug habits.

Women also read from their own poetry. The performance ended with personal testimonials by students and the Valley Vista residents about the life-changing lessons they learned from each other over the course of the term.

“I entered this place as a skeptic,” one student admitted to the audience as he shared his doubts that storytelling and mural painting could heal deep psychological wounds. But, he said, the class opened his mind to the redemptive power of art. “It’s been uncomfortable at times, as my ideas have been challenged. These women have taught me as much about the world as any of my professors.”

For Jessica Child, a Valley Vista resident who was released from the facility a few days after the performance, “Telling My Story” was the catalyst for her recovery. A 35-year-old University of New Hampshire graduate, Child said that her alcoholism had blinded her to her intellectual abilities—until she met the Dartmouth students.

“Being with these students made me realize that I missed being in college. I missed using my brain. Seeing Pati push them, too, and to see changes in them, and listening to their own testimonials, really blew me away. We all brought something special to this group, something that really clicked.”

Back on campus, several of the women residents attended the final class, joining the discussion of a passage from Grace Lee Boggs’s The Next American Revolution: Sustainable Activism for the Twenty-First Century. Hernandez asked them to form small groups to share ideas, not just about this project, but also about this year’s presidential election. People worried aloud about the future, but also hoped that political wrangling would stop and that constructive change would be possible. The students and Valley Vista residents promised to keep supporting each other and to stay in touch.

Watching them tearfully hug each other goodbye, Hernández said, “Students worried, at first, that they would say something wrong to the women, but the women loosened them up. They all questioned each other and came together.”

She asked how the women would keep moving toward sobriety after the class ended, and also asked students how they would remain active in social issues that mattered to them.

“To all of you—practice humility and withhold judgment. We all long for love and goodness,” she said. Then, glancing out the window, she took the class outdoors to watch the brilliant sunset.

The Valley Vista project is over for this term, but on campus, a group of Native American students have been preparing their own “Telling My Story” performance for 7 p.m. Wednesday, Nov. 15, at Dartmouth Hall, Room 105.