“Speaking at TED was a truly rewarding experience and an honor,” says Anela Arifi ’20. 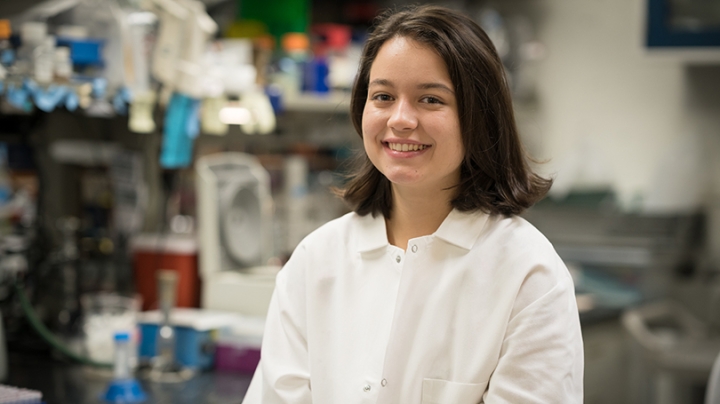 Anela Arifi ’20 has designed a system to make and store energy from chicken fat and feathers. She recently gave a TED Talk about her project in San Francisco. (Photo by Eli Burakian ’00)
11/09/2016
Body

As a teenager in her native Bosnia and Herzegovina, Anela Arifi ’20 spent a lot of time in high school collecting chicken fat. But not for culinary purposes. She collected chicken feathers, too, but not to stuff pillows. The feathers and fat became the unlikely ingredients of an alternative energy system that Arifi and her friend Llda Ismaili designed and built for the 2015 Global Google Science Fair, where they were among 20 finalists.

The two recently gave a presentation about their project at TEDWomen 2016, a three-day conference in San Francisco about the power of women and girls to bring about change.

“The poultry industry in the U.S. produces about 3 billion pounds of chicken feathers each year, and they end up, for the most part, in landfills,” says Arifi. She considers that a wasted resource. Arifi and Ismaili thought there must be a way to use some of that raw material in a socially responsible way. So they invented a small two-stage reactor—its about the size of a portable space heater—with an afterburner. The reactor performs two functions at once, converting the chicken feathers to carbon residue while creating the energy needed to derive biodiesel from the fat.

Why chicken feathers? They contain the protein keratin, which, when heated, opens up hollow tubes suitable—and cost-effective—for storing hydrogen.

Why chicken fat? “People are already making biodiesel from other waste products, like used French fried potato grease,” Arifi says. “I wanted to find another oil that was going to waste.”

Arifi didn’t start out knowing how to make biofuel—certainly not from poultry—so she did a lot of research in scholarly scientific journals she found on the internet.

“It’s not easy to be a woman scientist in my country,” she says. “At first, we couldn’t even find a lab to work in.” Nor did they have storage for all the feathers they collected from nearby factories and farms. “I just kept the feathers in our living room, on the sofa, loose, so they could dry. My mother wasn’t too happy about that, but she supports me, always.”

In fact, Arifi says, her mother is her role model. “She couldn’t finish college because of the war, but she is very, very smart.”

As a little girl, Arifi says, she peppered her mother with questions like, “Why is the sky blue?” As she got older, she competed in national math, physics, and chemistry competitions. Her curiosity and work ethic have paid off. As a King Scholar at Dartmouth, Arifi receives a four-year scholarship, mentorship, leadership training, and internship opportunities. She’s been working on biofuels with Lee Lynd, the Paul E. and Joan H. Queneau Distinguished Professor in Environmental Engineering.

“I was so lucky to get to come here. I don’t know anyone in Bosnia with an opportunity like this,” says Arifi, whose primary focus right now is on academics and playing her flute in the Dartmouth Symphony Orchestra.

In fact, her flute inspired the shape of her invention.

“I was having a problem designing a system that distributed gases well, and I happened to look down at my flute, how it’s a long tube with holes in it, and it has amazing air flow. And I thought maybe I could use that design in the afterburner chamber I was working on.”

Arifi revisited that turning point in her TED Talk. “The most fascinating thing to the audience, I think, was that I connected my love for music and science and designed an afterburner chamber based on the construction of my flute,” she says.

Her mother, whose travel to the San Francisco event from Bosnia and Herzegovina was funded by TED, was in the audience.

“I cannot even describe the happiness I felt then,” says Arifi. “Speaking at TED was a truly rewarding experience and an honor. I hope that, once the talk is released in a few months, more people will address the problem of world energy consumption and create a future for alternative energy.”