Teaching the 2016 Election Doesn’t Go by the Book 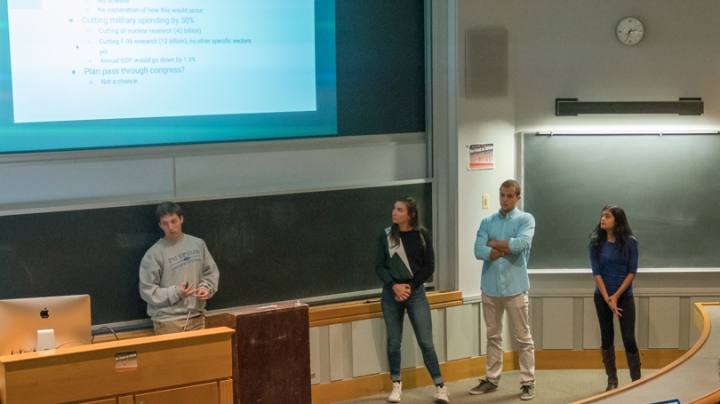 From left, Noah Kanter 19, Emma White 19, Max Lurie 19, and Shinar Jain 18 present their research in government professor Joe Bafumi’s “Campaigns and Elections” class. Each student was required to do two hours of political work for a candidate of their choice. (Photo by Eli Burakian ’00)
11/02/2016
Body

The 2016 presidential race presents countless exceptions to the textbook outline of how a national political campaign is waged, say Dartmouth government professors who have taught politics through many election cycles.

“This election presents interesting opportunities because there are a lot of new things to talk about in American campaigns and elections,” says Dean Lacy, chair of the government department, who is teaching “American Political Behavior” this term.

“On the other hand, teaching this year is challenging because a lot of the things we thought we knew about American politics may no longer be true. This may go down in political science as an asterisk—an election that we have to write off as not typical for some of the conventional patterns of campaigns and elections—but we don’t know.”

“For example, we read in the textbooks about how, after 2012, Republicans were going to try to broaden their appeal to new demographics, such as Hispanics. Now we see that Donald Trump is actually doing the very opposite, so we have to rethink what some of these very smart political scientists argued for the future when they released their books four years ago,” Bafumi says.

Deborah Brooks, an associate professor of government, is teaching “The Media and Advertising in American Politics” this term. She says many aspects of teaching political science are enhanced with the addition of new election material, but it is difficult to fully integrate it in real time as a high-profile campaign unfolds.

“This campaign has been especially overwhelming in that regard,” she says. “We talk about it at the start of my classes, of course, and tend to use it in examples, when relevant. But discussion as a campaign is in progress tends to be speculative by nature rather than meeting the higher threshold of analytical quality.”

The students in Bafumi’s class work in small groups as mock political action committees, strategizing for a hypothetical campaign on issues such as gaining free media coverage, or analyzing some of the candidates’ more offbeat policy proposals. The students are also required to do two hours of political work for a candidate of their choice.

Lacy says his students have been sorting through some of the questions raised by the presidential race. “They are debating the candidates’ strategies in the debates, who the swing voters are and how to reach them, whether there are any people now who could possibly be undecided in this election, and if they are, how could they be undecided?” he says.

Both Lacy and Bafumi have noticed less enthusiasm among students this year.

“I haven't seen the same kind of excitement in this election just in general as I've seen in previous elections,” says Lacy.

Many of Bafumi’s students have opted against working for one of the presidential candidates in favor of “down-ballot” races.

“I do think there is this sentiment that these are not the best candidates who could have been nominated, and they prefer to put their positive energies toward getting someone elected who they feel more positive and strongly about,” Bafumi says.

“Campaigns and Elections” student Abhishek Bhargava ’18 agrees that this year’s presidential election is out of the ordinary.

“It's very polarizing. Supporters of each side are strongly in favor of their candidate, so whoever becomes president is going to be disliked, at the very least, by a big part of the electorate,” Bhargava says.

Brooks says she has another class on the election to prepare for.

“Integrating the election in my college classes is vastly easier than what I need to do this week—talk to my daughter’s fourth-grade class at the Ray School in Hanover,” she says. “That is a hard lecture to design by any metric, especially in this election year, when their questions and comments might be a tad unpredictable.”