Directed by Tazewell Thompson, the fall production brings a diverse cast to the stage. 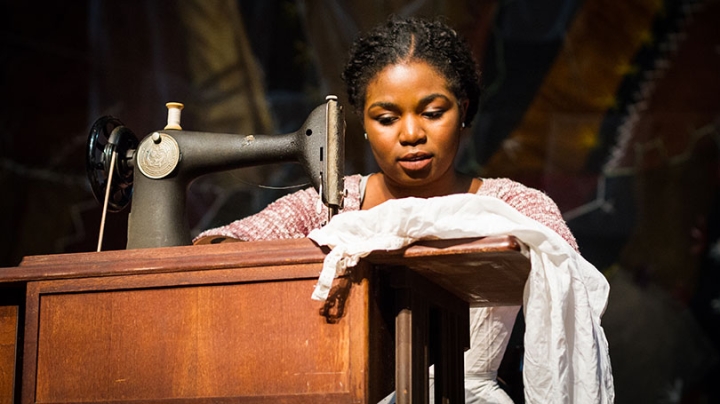 The play opens Nov. 4 and runs through Nov. 13. Tickets are available through the Hopkins Center for the Arts.

The stage is alive with sets and props: an upright piano, beds, sewing machine, and the carpetbag that the protagonist, Esther, carries with her wherever she goes. At the back, a transparent tapestry embroidered with colorful symbols hangs floor to ceiling, and behind it, lines of laundry are strung to evoke tenement buildings.

Guest director Tazewell Thompson has a perfectionist’s eye—and ear—on every detail as the cast and crew block scenes and run through lines. “All numbers are underlined!” Thompson reminds an actor who has put her emphasis on another word. “Remember that always—you’ll thank me!”

It is only the second rehearsal in the theater. “We moved into the Moore yesterday, so we’re starting to work through the play again and readjust to the new space,” says Zahra Ruffin ’17, who plays Esther, an African American seamstress—based on Nottage’s grandmother—who is building a successful business sewing lingerie for white society ladies and local prostitutes alike, and engaging in a long-distance courtship with a Barbadian laborer on the Panama Canal.

Ruffin and several of the other women in the cast are already in partial costume—the play calls for corsets, and they need to get used to moving naturally in the restrictive garments. “I am one of the weird people who love it,” Ruffin says.

Kelly Gaudet ’17, who plays Mrs. Van Buren, a wealthy socialite who buys “intimate apparel” from Esther, is not a corset enthusiast. “I thought it couldn’t be that bad, but it’s a little hard to breathe.”

Thompson, whose televised 2006 production of Porgy and Bess was nominated for an Emmy, has produced and directed dozens of operas and plays, including last year’s production of Nottage’s Ruined in Baltimore’s Everyman Theater. Formerly he was artistic director of the Syracuse Stage and the Westport Country Playhouse.

“We’re thrilled to have Tazewell Thompson as our guest director,” says Laura Edmondson, an associate professor of theater and chair of the theater department. “Not only does he have this extraordinary background as a theater professional, but he is really invested in the educational process.”

This is Thompson’s second stint at Dartmouth. In 2013, he directed another Main Stage production, of Charles L. Mee’s Big Love. “I’ve never been more excited to teach in an educational facility than I am at Dartmouth,” says Thompson, who has also worked with students on productions at Julliard and New York University.

At Dartmouth, he says, “the commitment is so deep, and the brain power is so wonderful. Sometimes the challenge is to get students to express their feelings through the words—to take what they know intellectually and turn it into something else. But when they get it, the dividends are great.”

Thompson’s residency is being funded through the theater department’s VOICES initiative, which supports the presentation of works by and for artists from underrepresented communities. The initiative has received funding from the Office of the Provost through the 2017-2018 academic year. The theater department hopes to find a permanent source of funding for it, Edmondson says.

VOICES is a critical part of the department’s effort to send “a sustained message that we welcome all communities on our stages,” Edmondson says. “We’ve always embraced multicultural casting of roles that are not specifically written for people of color, but we wanted to do a play by a playwright of color in which students of color would be able to inhabit roles specifically meant for them.”

Nashe Mutenda ’20, who plays Mayme, grew up in Tokyo, where, she says, “there aren’t that many roles for black women. This is the first time there’s actually been a role specifically that I could play, so that’s been an amazing experience.”

Mayme is a prostitute who is also a classically trained pianist and singer. It’s one of two roles Thompson wasn’t sure he’d be able to cast from a pool of undergraduate actors. “She has to sing, she has to play the piano, and she has to act,” he says. “I thought, what are we going to do? But Nashe does all three really well.”

The other role Thompson wasn’t sure he could fill is that of George—played by Gabriel Jenkinson ’20—who is a laborer on the Panama Canal engaging in an epistolary courtship with Esther. “It’s difficult to get an undergraduate who can embody that type of character,” Thompson says. “But he’s a wonderful young actor.”

Jenkinson says he relates to his character because of his own family. “My father was born in very rural, very poor Jamaica, and he moved to Canada with his family to find a better life for himself.” Playing George, he says, “honors my own heritage. It’s acknowledging a story that’s quite common but not often told, a story of the migrants who come to America looking for a better life and are faced with a whole set of challenges completely unlike anything they’ve ever experienced.”

Though the play is set more than 100 years ago, cast members say its story still resonates.

Gaudet says it’s been a challenge playing a character who is “not very likable.”

“She’s a racist and a bigot and elitist, and a lot of terrible things, but she’s also vulnerable, and strong in some ways,” says Gaudet, a double major in psychology and film, of Mrs. Van Buren. “It’s hard to get into the mindset of somebody who’s so mean, but it’s been fun.”

Jovanay Carter ’19 plays Esther’s landlady, Mrs. Dixon. Carter decided to audition for the role because of her experience acting in another VOICES production, last year’s For Colored Girls Who Have Considered Suicide When the Rainbow Is Enuf.

Carter says theater is an invaluable outlet from her coursework. “You come into rehearsal and you literally become someone else,” she says. “And that person doesn’t have midterms, and she doesn’t have studies to think about. She just has whatever her world is.”

For Ruffin, a theater major who is minoring in English, the production confirms her commitment to the theater. “I want to do this for the rest of my life. I’ve figured this part out,” she says. “This is incredible because it gives me a taste of what I’m hoping to do and where I need to grow. It’s an irreplaceable experience.”