Laurel Richie ’81 will take over as board chair in June, succeeding Bill Helman ’80. 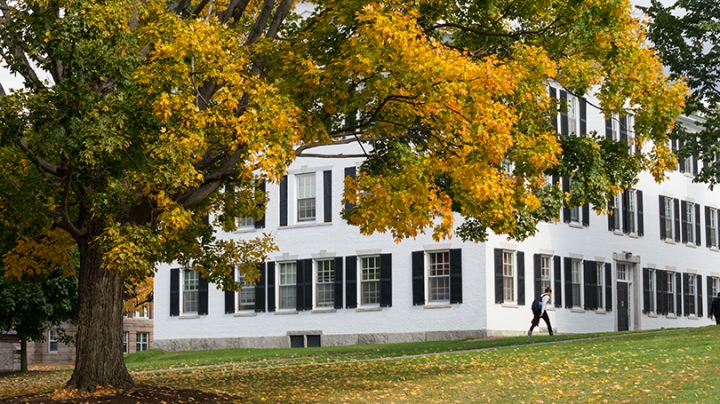 In a series of wide-ranging discussions at board sessions on Nov. 4 and 5 in Hanover, Dartmouth trustees discussed the importance of continuing to attract, support, and retain the most academically talented students and accomplished teacher-scholars.

Board members also named a chair-elect, heard about campus initiatives from faculty and staff leaders, met with the Moving Dartmouth Forward external review panel, and attended a breakfast with officials from the town of Hanover.

Dean of the College Rebecca Biron and Vice Provost for Student Affairs Inge-Lise Ameer led a conversation on how the College can maximize academic success and intellectual engagement for students through the first-year residential experience.  Evidence-based approaches, such as living-learning communities, collaborative projects, and meaningful connections with faculty early in a student’s college career, promote academic success, they said. Biron and Ameer discussed how living spaces, such as those in the house communities, should be designed to bring students together in informal settings and social spaces, and create opportunities for them to interact more frequently with faculty outside of the classroom.

“Dartmouth’s mission to educate the most promising students and prepare them for a lifetime of learning and responsible leadership, through a faculty dedicated to teaching and creating knowledge, is not limited to the classroom,” said President Phil Hanlon ’77. “Dartmouth’s residential experience provides an important opportunity for students to discuss new ideas and perspectives, to learn, and ultimately, to thrive.”

Board members heard from Lee Coffin, who began work in July as vice provost of enrollment and dean of admissions and financial aid. Coffin discussed admissions goals and strategies, which include using a data-driven approach to help Dartmouth identify and continue to attract an academically rich, diverse, and talented pool of students who reflect Dartmouth’s core values and contribute to the community.

“As I begin to put together Dartmouth’s recruitment and selection efforts, it is clear to me that we have the reputation, the program, and the resources to more vigorously act on our aspirations,” he said.

Laurel Richie Selected as Board Chair-Elect

Board members elected Laurel Richie ’81 to a three-year term as chair set to begin in June 2017. Richie, who was elected to the board as a charter trustee in 2012, will succeed Bill Helman ’80.

“Laurel’s contributions to Dartmouth have been tremendous,” said Helman. “She brings strong leadership skills, creativity, and intelligence to every challenge she takes on and profound kindness to every interaction she has. The board could not be in better hands.”

“What an honor—to be asked to chair this very talented board,” said Richie, who has served as vice chair and chair of the communications committee. “Dartmouth is where I learned to think critically, discovered my passion for the performing arts, and made lifelong friends. I would not be who I am today without Dartmouth. It is a profound privilege to be able to give back to this College that I love.”

Richie is a consultant to Teach for America, helping the organization achieve its vision of providing all kids with an excellent education within our lifetime. She also serves on the board of Synchrony Financial, a financial services company that is the nation’s largest provider of private-label credit cards.

She is a former president of the WNBA, and as head of the Women’s National Basketball Association was the first African American to lead a major professional sports league. Her many honors include being named one of the “Most Influential African Americans in Sports” by Black Enterprise magazine. She received the “Outstanding Women in Marketing and Communications” award from Ebony magazine, which also named her to its “Power 100” list.

After graduating from Dartmouth with a major in policy studies, Richie began her career in marketing, spending 24 years with the advertising agency Ogilvy & Mather, where she was a senior partner. In 2008, she joined Girl Scouts of the USA as senior vice president and chief marketing officer, leading the revitalization of the iconic brand.

“Laurel is one of Dartmouth’s most loyal alumni and committed ambassadors. She brings strategic thinking, creativity and deep insight into how the board can best serve the entire Dartmouth community,” said President Hanlon. “I look forward to our partnership.”

Hanlon also praised Helman’s leadership of the board.

“You could not ask for a more energetic and committed board chair than Bill,” he said. “He’s all in for Dartmouth—one of our most dedicated, accessible, and visible ambassadors—always encouraging us to think in big and bold ways. No one believes more strongly in the transformative power of a Dartmouth education than Bill. I’ll miss his sense of humor, his outspoken style, and his unflagging support of our faculty and students.”

Members of the independent Moving Dartmouth Forward review panel, led by Tufts University President Emeritus Lawrence Bacow, met with the board on Saturday morning to discuss the panel’s annual status report. The panel was charged in 2015 with reporting to Hanlon and the board on progress made in Dartmouth’s implementation of the goals identified in the Moving Dartmouth Forward Plan. The plan was the result of a process, launched by Hanlon in March 2014, designed to reduce high-risk drinking and sexual assault on campus and to create a greater and more inclusive campus community.

“Moving Dartmouth Forward is clearly gaining traction on campus,” said Bacow. “Dartmouth is doing everything it said it would do in the plan that was released in January 2015.”

And, Bacow said, Dartmouth is distinguishing itself in implementing such a wide-ranging set of initiatives.

“I don’t know of any other campus that is focusing on these issues in such a comprehensive way,” he said. “The people we talked with enthusiastically support the goals of Moving Dartmouth Forward. And while it is still very early in the game, the panel is optimistic that these changes will take hold, especially with the passage of time.”

Bacow and panel members shared insights with the board from their dozens of conversations with students, faculty, and staff, and they remarked on the supportive nature of the community for both the principles and goals laid out in the Moving Dartmouth Forward Plan. The challenge, Bacow said, is for Dartmouth to build on its early success and maintain its commitment to Moving Dartmouth Forward well into the future.

The panel’s annual report, expected to be finished in the coming weeks, will be made public on the Moving Dartmouth Forward website.

Trustees joined faculty deans and chairs of faculty governance committees for a reception and informal conversation on Friday evening at the Top of the Hop. The board also hosted a breakfast Friday morning honoring Hanover town officials and thanking them for their support following the fire last month in the Morton Hall dormitory.