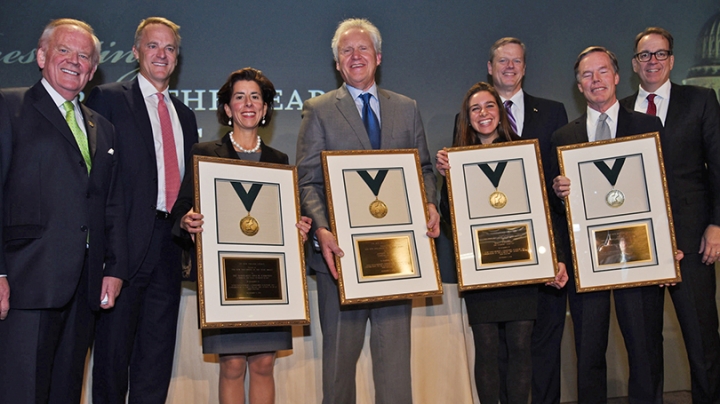 GE Chairman and CEO Jeffrey Immelt ’78, center, and Olympian Abbey D’Agostino ’14, fourth from the right, were honored Nov. 1 as New Englanders of the Year. (Photo courtesy of the New England Council)
11/17/2016
Body

Read the full story, published by the Office of Alumni Relations.

GE Chairman and CEO Jeffrey Immelt ’78 and Olympian Abbey D’Agostino ’14 were honored at the New Englander of the Year awards on Nov. 1. The awards, which were presented at the New England Council’s annual dinner, honor residents and natives of New England for their contributions to their field of work and their impact on the region’s quality of life.

D’Agostino, a native of Topsfield, Mass., is the most decorated Ivy League athlete in track and field and cross-country running. During the 2016 Summer Olympics in Rio, while running the women’s 5,000-meter race, D’Agostino and New Zealand’s Nikki Hamblin tripped over each other. When Hamblin couldn’t get up on her own, D’Agostino helped her up. When D’Agostino tried to resume the race, her torn ACL caused her knee to buckle, and Hamblin helped her to finish the race.

Immelt joined GE in 1982, just four years after graduating from Dartmouth with a degree in applied mathematics. Since becoming chairman of GE in 2001, Immelt has been named one of the World’s Best CEOs by Barron’s three times. In that time, GE has been named America’s Most Admired Company by Fortune magazine and one of the World’s Most Respected Companies by Barron’s and the Financial Times.