Veterans Plaques on Campus Recast to Name the Vietnam War

A gift from former President James Wright and his wife, Susan DeBevoise Wright, made the revised war memorials possible. 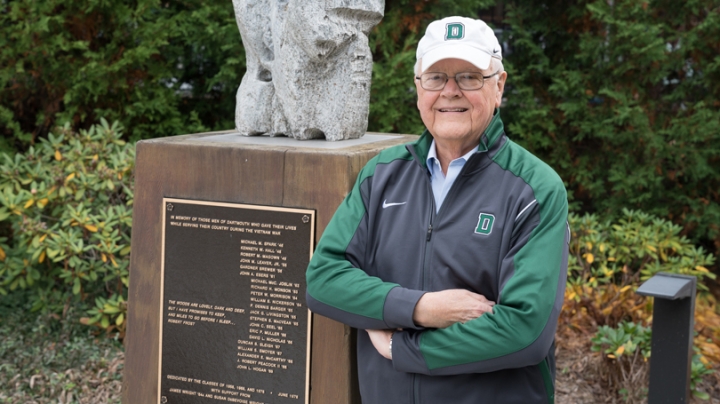 In 2016, thanks to a gift from President Emeritus James Wright and Susan DeBevoise Wright, the monument to war veterans killed in 1965-1972 was recast to read, “In memory of those men of Dartmouth who gave their lives while serving their country during the Vietnam War.” Wright said that Vietnam had too long been “the war that dare not speak its name.” (Photo by Eli Burakian ’00)
11/10/2016
Body

When President Emeritus James Wright spoke on Veterans Day last year, at the rededication of the Memorial Field war monuments, he noted that the Vietnam era plaque honored the Dartmouth men “who gave their lives in the armed forces, 1965-1972.”

“It reminded me of something that my late history department colleague, Charlie Wood, had said, that the Vietnam War was the war that dare not speak its name,” Wright says. “I just thought it was too bad that still, all these years later, this plaque did not mention the war in which these men had died.”

Wright, a U.S. Marine Corps veteran and an outspoken advocate for veterans’ access to higher education, and his wife, Susan DeBevoise Wright, resolved to do something about it.

Funded by a gift from the Wrights, the College recast the bronze plaques, one for Memorial Stadium and the other for the monument’s original location in Zahn Courtyard outside the Hopkins Center for the Arts.

“The only change on the new plaques is that they say ‘In memory of those men of Dartmouth who gave their lives while serving their country during the Vietnam War.’ So the war that dare not speak its name is now there,” Wright says.

Last summer, Wright visited the sites in Vietnam where three of the Dartmouth men named on the monument, U.S. Marines William “Billy” Smoyer ’67, Duncan Sleigh ’67, and Philip Barger ’65, were killed in action. Wright was there doing research for his latest book, Enduring Vietnam: An American Generation and Its War, set for release in April 2017.

The book is a history of the Vietnam War in the pivotal year of 1969, as told by the men and women who served there and the survivors of those who fell. His work on the book made him more keenly aware of American ambivalence to that war, and this inspired the gift that made possible the recasting of the plaques to honor the Dartmouth solders who fell in Vietnam, Wright says.

Following the rededication of the monuments at Memorial Field, the revised plaque in the Zahn Courtyard, and preparations for Veterans Day at Dartmouth this year, Campus Planning and Design has published a new map highlighting all the veterans’ memorials on campus.

Wright hopes the new map will raise the visibility of  Dartmouth monuments. “The feedback I have had, including from a few of the families of those named on the plaque, has been very positive. But most people discover the revised plaques by accident,” Wright says.

“I do think this shows that Dartmouth is now fully embracing those who served and those who sacrificed in Vietnam. And I think it is important to the classes of the ’60s—and obviously to a broader community,” he says.