The research may help patients and their doctors in crucial decision-making, medical experts say. 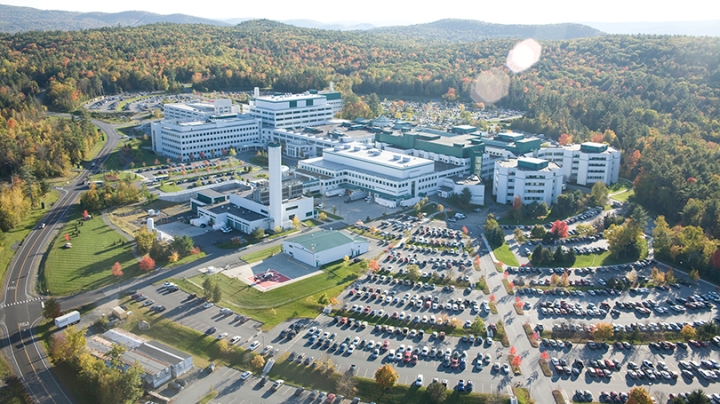 Read the full story, published by the Geisel News Center.

With funding from the National Institutes of Health and using state-of-the-art molecular biology and statistical approaches, researchers at Dartmouth’s Norris Cotton Cancer Center (NCCC) have broken new ground in the understanding of glioblastoma, a rare but deadly type of cancer that originates in the brain. Roughly 12,000 new cases are confirmed in the U.S. each year, and its highly infiltrative nature renders it particularly difficult to treat.

Led by Brock Christensen, an associate professor of epidemiology at the Geisel School of Medicine, and Kevin Johnson, GR ’16, researchers identified the functional role of two distinct DNA modifications in glioblastoma (GBM) tissues. The signature of one of these pattern disruptions in particular, 5hmC, had an especially strong association with patient survival.

“How might this information help doctors provide a more accurate prognosis for their patients? It’s too early to say,” writes Francis Collins, director of the National Institutes of Health, in his Dec. 6 blog. “But the total levels of 5hmC varied considerably from one tumor to another, and those differences appear to be critical. The researchers showed that patients with less 5hmC present on select parts of their tumor DNA had a worse prognosis. In fact, people with low amounts of this chemical mark often lived little more than two months compared to over a year for those with higher 5hmC.

Currently, Collins writes, “even with surgery, radiation, and chemotherapy, people diagnosed with glioblastoma have a median survival of only about 18 months. That’s why this kind of information could ultimately prove valuable for patients and their doctors in making difficult treatment and end-of-life care decisions. That’s also why Johnson and Christensen say they’ll continue to work to learn more about how these epigenetic patterns and other molecular level changes drive glioblastoma and other cancers.”

One of the distorted molecular features of GBM is faulty epigenetic regulation. The epigenome involves modifications to DNA that dictate which genes are turned off and on within a particular cell type. Defects here are known to contribute to cancer and current methods to predict brain tumor patient prognosis are based on epigenetic tumor subtypes. However, the epigenome is complex and there are recently discovered epigenetic marks that remain understudied in GBM.

The Dartmouth researchers broke new territory by analyzing the profile of multiple DNA modifications, 5-methylcytosine (5mC) and 5-hydroxymethylcytosine (5-hmC), in a set of 30 glioblastomas in collaboration with clinicians at NCCC. “An intense interest has emerged in detailing the functional role of distinct DNA modifications in both healthy and disease tissues,” says Christensen. “Here, we uncovered that specific DNA 5mC and 5hmC patterns are disrupted in GBM and uniquely characterize the molecular switches of the genome known as ‘enhancers.’ Importantly, we discovered that 5hmC signatures had a particularly strong association with patient survival.”

Their paper detailing these patterns has been published in the journal Nature Communications.