The two met in 1998 as they prepared for space shuttle missions at Kennedy Space Center. 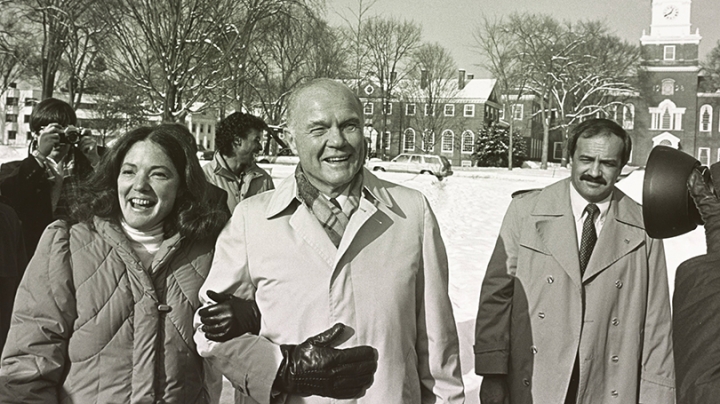 Dartmouth’s Jay Buckey ran into John Glenn working out at the gym in NASA’s Kennedy Space Center as they both prepared for space shuttle missions in 1998. It would not be the then-77-year-old Glenn's first trip into orbit.

Glenn, the first American to orbit the Earth, a longtime Democratic senator from Ohio, and one-time presidential candidate, died Thursday, Dec. 8, in Columbus, Ohio. He was 95.

This week, Buckey, a professor at the Geisel School of Medicine and an adjunct professor at Thayer School of Engineering, remembered the icon of the American space program.

“Now that spaceflight has become more routine, we forget the courage it took to fly in the Mercury program. The capsules were tiny and the rockets were still being refined. He was an inspiration, because he was ready to be a pioneer and accepted the risks that came with that,” says Buckey,

Glenn, who was still in the Senate in 1998, was a payload specialist on the Space Shuttle Discovery, bookending his career as an astronaut by becoming the oldest person to fly in space. Buckey was preparing for the launch of the Space Shuttle Columbia for the shuttle program’s Neurolab mission.

“I remember being very pleased to have a chance to meet him at the astronaut gym,” says Buckey. “America has been a pioneering nation, and John Glenn was one of our space pioneers. He was a national hero.”

Astronaut Jay Buckey met John Glenn in 1998. “I remember being very pleased to have a chance to meet him at the astronaut gym,” he says. (Photo courtesy of NASA)

The effects of space travel on a 77-year-old man related directly to Buckey’s study of the physiological effects of space flight. “It showed that age did not need to be a limitation to flying in space,” he says.

Like Glenn, Buckey saw the end of the shuttle program as a loss for the nation, but he holds out hope that NASA will “continue to inspire, and that there will be new initiatives.”

Glenn famously said, “The Moon is not even the end of things. We’re going farther than that,” in a speech after the space agency presented him with the Ambassador of Exploration Award in 2006.

In a transcript of his remarks on the NASA website, Glenn is quoted as saying, “The most important thing we can do is inspire young minds and to advance the kind of science, math, and technology education that will help youngsters take us to the next phase of space travel.”