The sociology major will study for a year at Tsinghua University in Beijing. 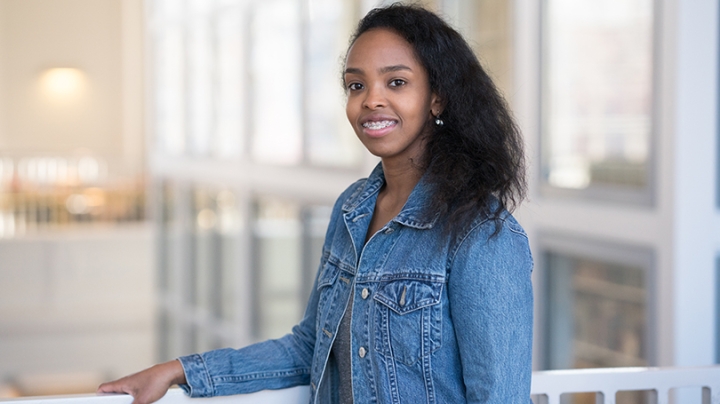 Halimo Hassen ’17 plans to complete a master’s degree in international affairs, concentrating on public policy. “I’m hoping the scholarship will serve as an experience that will allow me to continue to give back throughout my life,” she says. (Photo by Eli Burakian ’00)
12/01/2016
Body

Halimo Hassen ’17, a sociology major from Atlanta, Ga., has been named a Schwarzman Scholar—one of 129 top students from around the world who next year will participate in a one-year master’s program at Tsinghua University in Beijing.

Hassen will be Dartmouth’s third representative to the Schwarzman program, following in the footsteps of Jordyn Turner ’16 and Jacob Gaba ’16, who are members of the program’s inaugural class this year.

“It’s a testament to Dartmouth’s global reach that our students have been represented in the Schwarzman’s first two classes,” says Provost Carolyn Dever. “Halimo is a remarkable student with a passion for public service. That she has been recognized on this international stage should make the entire Dartmouth community proud.”

Founded by Stephen A. Schwarzman, chairman, CEO, and co-founder of the global investment firm Blackstone, the Schwarzman Scholars program seeks prepare a new generation of international leaders “to respond to the geopolitical landscape of the 21st century,” according to the program’s website.

“I was exploring graduate fellowships and the Schwarzman scholarship seemed new, innovative, and placed an emphasis on leadership,” says Hassen. “It’s an opportunity to study in a different country for a year, learn about China as a major world power, and learn a new language in a completely different environment in the process.”

Through the program, Hassen plans to complete a master’s degree in international affairs, concentrating on public policy. “I’m hoping the scholarship will serve as an experience that will allow me to continue to give back throughout my life,” she says.

She was also drawn to the opportunity to shape a new program. “The first few cohorts will define the future of the scholarship, and I wanted to be a part of that,” she says.

FYSEP director Jay Davis ’90 says, “From the moment I first met Halimo during FYSEP’s pre-orientation program, it was clear that she brings passion, commitment, and compassion to all that she does,” he says. “I have known few students who can match her dedication to making others’ lives better.”

Through her major, she has conducted research on the impact of globalization on Somalia after that country’s civil war and has studied how increasing diversity in work teams can improve business outcomes.

“In the classroom, I appreciated Halimo’s ability to ask pressing and difficult questions while at the same time being lighthearted and genuine with her peers,” says Janice McCabe, an associate professor of sociology, with whom Hassen took two courses, “Sociology of Gender” and “Education and Inequality.” “It was clear that she was interested in exploring inequality from a sociological lens and that she was committed to social justice on campus and globally.”

Hassen has worked as a student manager at the Collis Student Center, and served as secretary and co-director of CoFIRED, the Coalition for Immigration Reform, Equality, and DREAMers—a group that received a Martin Luther King Jr. Social Justice Award in 2014 during her tenure.

She completed the Harvard Summer Ventures in Management program and participated in the Jumpstart Advisory Group, a program that helps women and members of minority groups build business leadership skills.

She has received scholarships from the Gates Millennium Scholars Program, the GE Reagan Foundation, Coca-Cola, the Horatio Alger Association, and the Ron Brown CAPtain program, and received a Capital One Case Competition prize.

Hassen’s siblings Hassan Hassen ’18 and Ridwan Hassen ’15 have also studied at Dartmouth; Ridwan was named a Rhodes Scholar in 2015. “I am very thankful to my family and my close friends,” Halimo Hassen says. “They have been a tremendous support system and have challenged me to excel in every possible way.”

“Throughout my time in college, I’ve started initiatives that have assisted low-income, high-achieving high school students in the college admissions process,” she says. “In the future, I hope to expand these initiatives to a broader scale and help to work towards ameliorating educational disparities.”

Of those younger students, Hassen says, “I hope to inspire them to dream big and do more.”

Founded in 2015, Schwarzman Scholars was inspired by the Rhodes Scholarship and is designed to meet the challenges of the 21st century and beyond. Scholars chosen for this highly selective program will live in Beijing for a year of study and cultural immersion, attending lectures, traveling, and developing a better understanding of China.

For information about applying for Schwarzman Scholarships and other programs, and to see a list of past recipients, visit Dartmouth’s National Scholarships/Fellowships website.