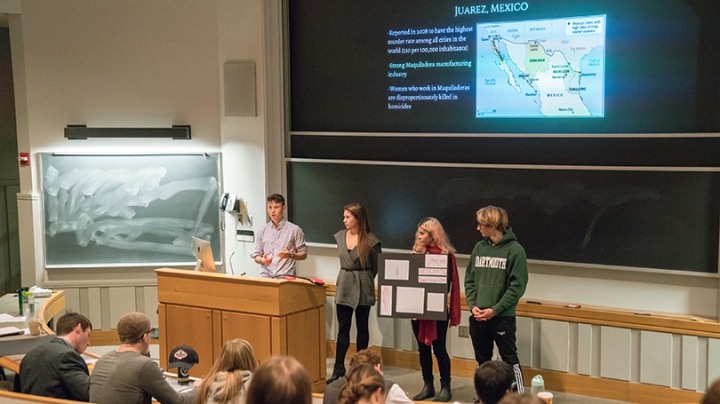 Innovative teaching doesn’t have to be driven by technological bells and whistles. Sometimes it develops out of a simple conversation.

That’s what happened when four professors in the humanities—English professors Colleen Boggs and Barbara Will, art historian Katie Hornstein, and theater professor Laura Edmondson—participated in a panel discussion of the 100th anniversary of World War I with visiting artists from the Kronos Quartet, who performed at the Hopkins Center for the Arts last December.

And, she says, they had an idea.

“We realized that while all of us have a different scholarly focus, we have this common interest in war representation,” says Boggs. “We thought, what happens if we take our individual expertise, but step beyond that to ask the big questions from different vantage points? That was the origin of this class.”

The class that grew out of that conversation is “The Arts of War,” co-taught for the first time this fall by all four professors and cross-listed in art history, English, and theater, thanks to an Innovative Course Award from the Office of the Dean of the Faculty.

“It has been a terrific experience all around—a true model of interdisciplinary teaching,” says Will, the A. and R. Newbury Professor of English and associate dean of arts and humanities. In addition to theater, English, and art history, the professors also represent the Women’s, Gender, and Sexuality Studies and the African and African American Studies programs.

Organized around theory and case studies, the course called for students to read and view a wide array of literature, visual art, and performance and to develop critical tools for analyzing creative responses to conflict.

Art history major Jane Handorff ’17 says she found the opportunity to have four female professors “a very empowering idea. It’s been a great experience—like nothing I’ve had at Dartmouth before.”

Teaching with multiple colleagues required the faculty to actively collaborate. “We’ve become fans of Google Docs, and we very carefully plotted out who was doing what,” says Boggs.

“Having four professors in the room had the effect of decentering authority, so that no single person was in charge or presenting herself as the expert,” says Will. “This meant that all of us—professors and students alike—became learners in the class.”

Julian Heninger ’17, an English major, found the interdisciplinary aspect of the course challenging. “There were moments when I’d be feeling comfortable with the traditional aspect of an English class, and then all of a sudden I’d have art history and theater terms thrown at me.” But, he says, “it’s good to be jarred a bit. You’re more limited if you stay within one discipline of study.”

The class went on a field trip to a Revolutionary War-era fort in Charlestown, N.H., where they observed a tactical demonstration of battle maneuvers. Students wrote papers “relating that experience to theoretical readings and to texts, images, and performances that we talked about in class—bringing three seemingly different things into conversation with one another and developing an argument out of that,” says Boggs.

They also toured campus to see how war is represented at Dartmouth, from the Civil War plaques in Webster Hall (now the home of Rauner Special Collections Library) to Rauner’s archives to the Vietnam War memorial in Zahn Courtyard—beginning with the Rupert Brooke Room in the English department’s Sanborn Library.

Brooke, a major poet of the First World War, is “now largely forgotten,” Boggs says. “So we talked about why do we have a Rupert Brooke Room in Sanborn? We actually have an extensive archive that was an anonymous gift to the College—a reflection of how important he was. We talked about how none of the students knew that this was here. It’s completely present and yet invisible.”

Economics major Ned Southwell ’17 says the course pushed him out of his comfort zone—exactly what he was looking for when he decided to come to Dartmouth. “I love the fact that Dartmouth has classes like these that can be accessed by people who aren’t necessarily fluent in the language of art history,” he says. Writing papers for this class was “daunting,” he says, but also “a very cool experience—taking the tools that they gave us in class and putting them to use.”

Southwell says he’s learned that, unlike more “objective subjects” such as his own field of economics, art history is “trying to answer unanswerable questions.”

“A central theme of this class was how society’s memory is cyclical when it comes to war,” he says. “We tend to go war, see the atrocity, say that we’re done with it, and then somehow we always work our way back again. It’s a forgetting of the cost.”

“I found the students to be deeply engaged with the subject matter in a way that seemed stronger than in other classes,” says Will. “This might have to do with the subject—both art and war produce strong reactions in people—but I also think the unusual structure of the course, the rigorous syllabus, and the learning opportunities outside the classroom all contributed to an extraordinarily strong level of engagement on the part of the students.”

At the end of the term, teams of students presented creative projects. Several groups chose to propose their own war monuments. Among their proposals: a World War I memorial to be installed on the Washington Mall, and a Robert Frost-inspired memorial to Dartmouth’s war dead, to be located in the Bema.

Ben Szuhaj ’19 and his group proposed a traveling monument to the hundreds of women murdered in Juarez, Mexico, since the early 1990s.

“That’s something you actually have to argue about being a war,” says Boggs. “But that’s precisely the kind of thinking we were encouraging. We use terms like ‘war’ and we think we know what they mean, but what do they mean? Especially when we’re talking about memory, remembrance, commemoration—how are we already making decisions about what rises to the level of something that can be remembered in public forums?”

“I was a huge fan of the creative project,” Szuhaj says. “It gave us a chance to express viewpoints we didn’t necessarily get to talk about during class discussions. I was impressed with the memorials of every group, because I thought we all brought something different to the table. The ability of college kids to produce such marvelous memorials speaks to how well the professors prepared us to tackle this project.”