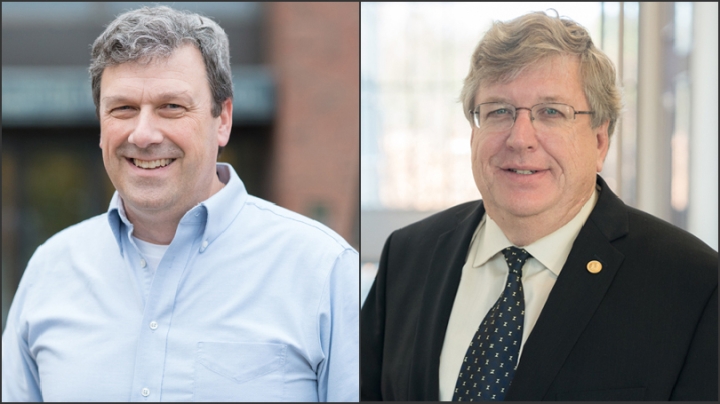 Madden will transition into the post of vice provost for research, working with current Senior Vice Provost Martin Wybourne until July 1. Fossum takes over Jan. 1 as associate provost for the Office of Entrepreneurship and Technology Transfer (OETT), following Professor Tillman Gerngross, who served three years in the position.

“Dartmouth is very fortunate to have two such dynamic scholars and teachers to advance research and support the development of pathbreaking new work across all the disciplines at Dartmouth,” says Dever. “Dean Madden and Eric Fossum are well equipped to enrich the Dartmouth research mission and to move innovations from the academy to the wider world.”

Gerngross, a professor of engineering at Thayer School of Engineering, returned to his biotechnology start-ups, teaching, and research in July. During his tenure as associate provost, Gerngross brought his perspective as an entrepreneur and innovator to his leadership of the OETT.

Wybourne, who has held the position of vice provost for research since 2004, plans to resume his faculty position in the physics department, where he is the Francis and Mildred Sears Professor of Physics.

“It has been a privilege and an honor to serve the faculty and College in my roles as senior vice provost for research, as interim provost for two years, and as the associate dean for the sciences,” Wybourne says. “Now I am looking forward to returning to the faculty and physics.”

Dever says Wybourne’s many accomplishments have enriched the College.

“Research at Dartmouth has greatly benefited from Martin’s leadership,” she says. “He has been instrumental in developing the robust research infrastructure that serves every member of the Dartmouth scholarly community to advance the frontiers of knowledge. He has also been a strong ambassador for Dartmouth through his service at the state, national, and international level.”

As vice provost for research, Madden will oversee Dartmouth’s research vision, strategy, and infrastructure and work with the provost on strategic planning efforts. His goal, he says, is to encourage new research initiatives while administering institutional requirements in a way that minimizes barriers to the work.

“Martin Wybourne has built a high-functioning office that has supported faculty and fostered significant research success. Maintaining that forward momentum and continuing to catalyze exciting research opportunities will be my focus,” he says.

Prior to his appointment, Madden participated in the development of the School of Graduate and Advanced Studies and chaired the biomedical sciences working group for the Geisel School of Medicine’s curriculum reform initiative. He currently leads a Dartmouth biomedical laboratory that conducts National Institutes of Health-funded research projects on molecular recognition and cystic fibrosis, and directs the newly established campus-wide Institute for Biomolecular Targeting.

In his new post, Fossum will oversee the DEN Innovation Center and its staff as well as the Office of Entrepreneurship and Technology Transfer. He credits Gerngross and Trip Davis ’90, former executive director of the OETT, with building a talented and successful team and creating the conditions to encourage innovation and entrepreneurship.

“They have forged a new, alternative path for faculty to pursue start-ups from their research activity. In addition to providing administrative oversight for ongoing activities, further development of a long-range vision and strategy for entrepreneurship and technology transfer will be a focus of our work,” Fossum says. “Guiding faculty colleagues in the area of entrepreneurial thinking for themselves, our students, our community, and our country’s future is important to me,” he says.

Fossum, a member of the National Academy of Engineering, has led breakthrough research on solid-state image sensors, has been CEO of two successful high tech companies, was named by the American Association for the Advancement of Science as an AAAS-Lemelson Invention Ambassador, and is the director of the PhD innovation program at Thayer.

Both Fossum and Madden will continue to teach and to pursue their research while serving four-year appointments in the provost’s office.