A second report shows Dartmouth is on track to improve campus safety and climate. 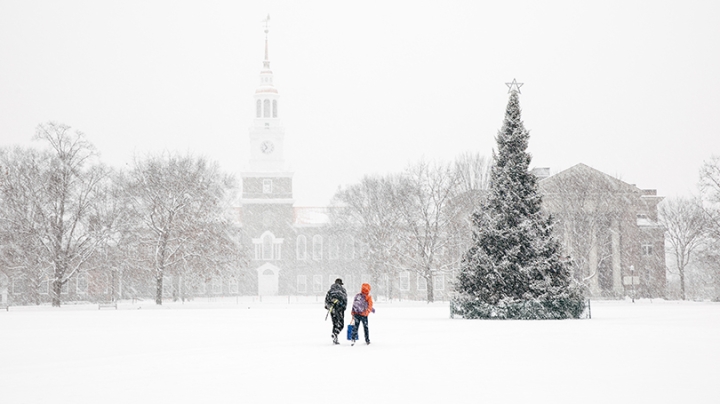 The Moving Dartmouth Forward (MDF) external review panel has released its second report to the Dartmouth Board of Trustees, and the news is good—Dartmouth, the reviewers find, has made progress on every action called for in the MDF plan, though some parts of the implementation remain in early stages.

In 2015, President Phil Hanlon ’77 announced the Moving Dartmouth Forward plan—an effort to make the Dartmouth campus more inclusive and to reduce high-risk behavior, particularly binge drinking and sexual assault, among the students who live and learn here—and appointed the review panel, led by Lawrence Bacow, president emeritus of Tufts University and leader in residence for the Center for Public Leadership at Harvard’s Kennedy School.

In general, the panel is pleased with Dartmouth’s progress. “Every college campus is struggling with the issues of high-risk drinking, sexual assault, and inclusivity, but we are not aware of any other campus that is addressing the issues with the same level of transparency and comprehensiveness” as Dartmouth, the report concludes.

At the same time, the report stresses that “for the continued success of Moving Dartmouth Forward, it will be important for Dartmouth to maintain its commitment over the long term.”

Among the details in the report, the panel describes the launch this past fall of Dartmouth’s new residential house communities and the implementation of programs aimed at drawing applicants from underrepresented populations, including veterans and students from low-income families.

The report urges continued investment in the house communities, noting that the College has committed $1 million a year for programming for the house communities and other social activities on campus. “At the early stages of implementation, undergraduates (across class years) have been actively involved in the creation of programming,” the report says, calling the fact that first-year students are participating in house governance “a testament to the successful early student adoption.”

Dean of the College Rebecca Biron says she is glad to have the report’s observations and guidance. “The launch of the house communities has been successful through the hard work of students, faculty, and staff, and it’s gratifying to see that effort recognized by the review panel,” she says. “They see how far we’ve come, and understand that a transformation in residential life doesn’t happen overnight.”

The report acknowledges that the College needs more data in order to assess the impact of initiatives aimed at making campus safer and healthier. At the same time, the panel found signs of progress. Among their specific findings: A Dartmouth-specific app, LiveSafe, designed to make it easier for students to report emergencies, has had 838 users in its first year. The report also calls the Dartmouth Bystander Initiative, which trains students to intervene when they see risky behavior, “impressive in scale and scope in comparison to similar efforts at peer institutions.”

Other goals of MDF noted in the report include efforts to set high expectations for student behavior, from a code of conduct pledge students take when they matriculate to the development of a standardized annual review of student organizations. The report also details the College’s investment in the Experiential Learning Initiative, among other efforts to strengthen intellectual engagement and out-of-the-classroom learning.

The panel based its findings on a review of data, updates from administrators, and two campus visits during which the panel met with “a range of students, faculty, and staff.”

In addition to Bacow, review panel members include Deborah Golder, associate vice provost and dean of residential education at Stanford University; Ralph Hingson, director of the division of epidemiology and prevention research at the National Institute on Alcohol Abuse and Alcoholism; Malcolm Leverett ’14, an analyst with Vanguard Group Inc.; and Rachel Siegel ’12, a private law fellow at Harvard Law School.