The senior lecturer in history was honored by the British-Kuwait Friendship Society. 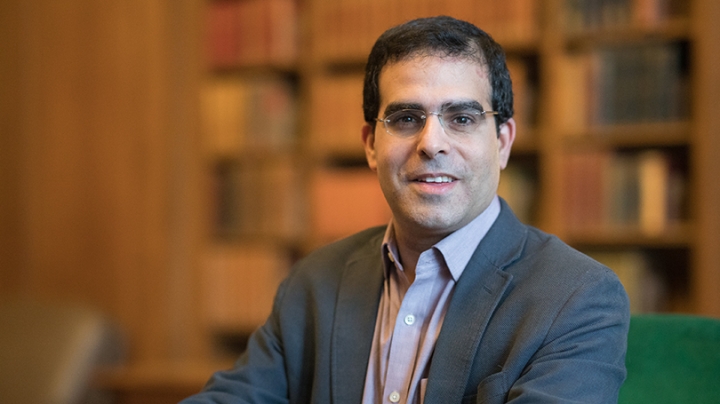 “It’s so validating for all the work I put in in the field in Saudi Arabia—a place that’s very hard to figure out—to be recognized in this way,” Senior Lecturer Nadav Samin says. (Photo by Eli Burakian ’00)
1/04/2017
Body

Nadav Samin, a senior lecturer in history, is one of the winners of a 2016 British-Kuwait Friendship Society prize for his book Of Sand or Soil: Genealogy and Tribal Belonging in Saudi Arabia, a study of the influence of historical tribal affiliations on the complex political and social interactions in the modern Saudi kingdom.

The annual prizes are awarded for outstanding works in English on the Middle East, and are judged by leading faculty at the University of Cambridge in England and by members of the British Society for Middle Eastern Studies, publisher of the influential British Journal of Middle Eastern Studies. The prize was established with an endowment from the Kuwait-based Abdullah Al-Mubarak Al-Sabah Foundation.

Samin’s book tied for first runner-up from among some 50 scholarly works. In granting the 2,500 pound prize, the reviewer wrote that Samin “succeeds in his aim of providing a narrative of Saudi history that does not focus solely on oil or Islam,” calling his work “a remarkable achievement.”

“It’s so validating for all the work I put in in the field in Saudi Arabia—a place that’s very hard to figure out—to be recognized in this way,” Samin says. “To have this panel of judges read with a deep focus and appreciate the work—there’s really no greater satisfaction.”

Samin came to Dartmouth at the encouragement of Dale Eickelman ’64, the Ralph and Richard Lazarus Professor of Anthropology and Human Relations. As a doctoral student at Princeton, Samin consulted with Eickelman for his dissertation, which formed the foundation for Of Sand and Soil. Eickelman helped establish the Dartmouth-American University of Kuwait program, which has had a cooperative agreement with Dartmouth since 2003.

Samin, who has led courses in Middle Eastern studies in the history, anthropology, and government departments, as well as in the Jewish Studies Program, says Dartmouth provides a rich environment for teaching and scholarship.

“It offers a wonderful opportunity to teach some of the brightest students in America, to experiment with new conceptual syntheses with these bright and eager young people, who collaborate in the production of new ideas and new knowledge,” he says.