The social justice activist and performer kicked off MLK celebrations on campus. 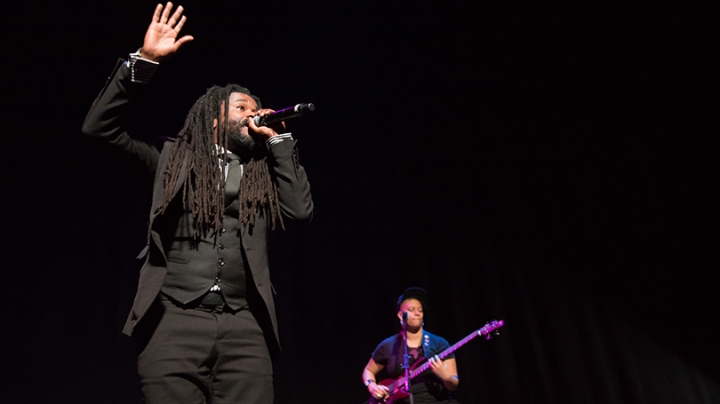 The Rev. Osagyefo Uhuru Sekou (left) and singer-songwriter Jay-Marie Hill perform in Moore Theater in the Hopkins Center for the Arts in honor of Martin Luther King Jr. (Photo by Josh Renaud ’17)
1/17/2017
Body

“I come from a tradition where we do a little talking back,” the Rev. Osagyefo Uhuru Sekou told a near-capacity crowd at Moore Theater in the Hopkins Center for the Arts Monday night during a performance that was equal parts civil rights rally, sermon, and concert.

The activist, preacher, and performer was on campus to help kick off the College’s annual Martin Luther King Jr. celebration of social justice activism and service, which is ongoing through mid-February.

Accompanied on bass by singer-songwriter and instrumentalist Jay-Marie Hill, Sekou encouraged talking back throughout the evening, exhorting audience members to introduce themselves to the people seated next to them, to move to sit with strangers, and—especially—to sing, clap, and jump up and down.

He told the audience to resist ahistorical accounts of King’s legacy. “Martin Luther King was not popular during his lifetime,” he said. A majority at the time believed King’s actions were hurting, not helping, the causes he fought for—the same critique, Sekou said, that is currently being leveled against Black Lives Matter activists.

“People will say, when young people shut bridges down, and shut highways down, in terms of browbeating them, they would say Martin Luther King wouldn’t shut a bridge down,” he said. “But there was a movie, Selma”—about King’s 1965 voting rights march—“that’s all about a bridge being shut down.”

Sekou emerged as a leader during the demonstrations that followed the 2014 police shooting of Michael Brown Jr. in Ferguson, Mo., for which he helped train protestors in nonviolent civil disobedience. He is the inaugural Bayard Rustin Fellow at the Fellowship of Reconciliation, the oldest interfaith peace organization in the U.S.; a former visiting scholar at Stanford University’s Martin Luther King Education and Research Institute; and a former pastor for Formation and Justice at First Baptist Church in Boston’s Jamaica Plain.

In response to the movement that grew from Ferguson, Sekou and Hill collaborated on the album The Revolution Has Come, which includes the single We Comin’, described by the St. Louis Post-Dispatch as an anthem of “the new civil rights movement.”

They closed Monday’s performance with the album’s title song, which proclaims that when oppressed people stand up against injustice, “we’ve already won.”

“My experience is that, when young folks all over the country stood in opposition to various forms of state violence, I think we’ve won,” Sekou said. “Every time a trans person says that I’m going to be fully who I am, we’ve won. And so we do have some difficult days ahead to be sure. And those days will be tattered with defeats and brokenness and continual forms of being alarmed at the audacity of the degradation. But I am glad to be alive in this moment.”

“Dr. King noted that the extreme optimist and the extreme pessimist agree on one point—they’re not motivated to act,” Hanlon said.

“That day Dr. King encouraged the Dartmouth community to embrace a middle ground, what he called the ‘realistic position,’ recognizing that in fact there’s truth in both of those extreme positions. The path forward is more complicated; there is a mix of steps that represents real forward progress, interlaced with actions that are very real setbacks.”

While noting that “many people with good cause” see this as a moment “of particular risk” nationally, Hanlon encouraged the community not to lose focus on change at Dartmouth. “While our vigilance must apply to a much larger stage, we can actually begin this on our own campus, by working toward a strong foundation of honesty, openness, and mutual respect, from which all progress originates.”

Addressing the theme of this year’s MLK celebration, “the fierce urgency of now,” Selome Ejigu ’17, president of the Afro-American Society, spoke of her debt to the “small contingency of people, overwhelmingly black, women, and queer, who often and unfailingly speak their truth to power” at Dartmouth, in spite of what she called the institution’s failure to hear them.

“And so I dedicate this moment on this stage to the black women here at Dartmouth and women the world over who have always seen and experienced their nows as urgent and have relentlessly spoken out about it and through it all somehow managed to envision and work toward more just and loving communities. We all owe, in some shape or form, some thanks to a black woman.”

Following the performance, Sekou and Hill answered questions from the audience in a conversation moderated by Evelynn Ellis, vice president for Institutional Diversity and Equity.

Among the questions: Who are the leaders of today’s social justice movement?

“There are plenty of leaders, they’re just not going to be cis, straight, black men,” Sekou said.

Hill added, “I would say it’s actually better to focus on organizations, because focusing on individuals endangers that individual. We know that today is commemorating a person whose life was taken because there was a little too much attention on him, so we couldn’t protect him.”

Asked about channeling anger into meaningful action, Sekou said the key is to cultivate joy. “My grandparents used to sing a song:

The world didn’t give it and the world can’t take it away.

“I actually organize my life around joy,” Sekou said.