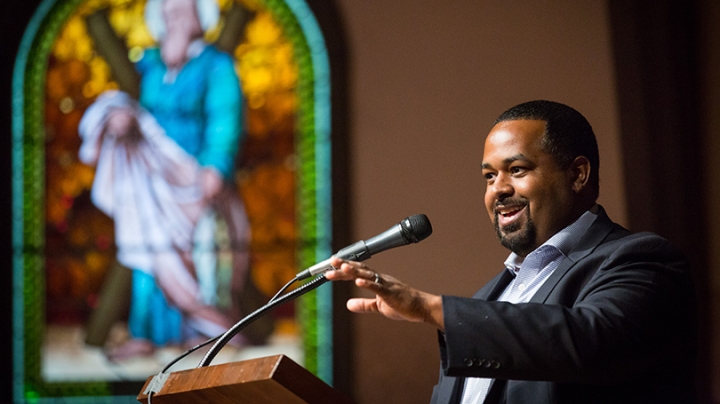 Joshua DuBois preaches on this year’s theme of “the fierce urgency of now” for the Martin Luther King Jr. Multi-Faith Celebration at Rollins Chapel on Sunday. DuBois also delivered the MLK Celebration lecture Monday night at the Nelson A. Rockefeller Center for Public Policy. (Photo by Joshua Renaud ’17)
1/24/2017
Body

During the presidential transition, people of good faith need to compassionately engage those with whom they do not agree, said Joshua DuBois, the former director of faith-based and neighborhood partnerships in the Obama White House.

“We engage not to call them out, but to call them in,” he said at Monday night's MLK Celebration at the Nelson A. Rockefeller Center for Public Policy, where he deliver a lecture titled “Faith, Race and Justice in America: From Obama to Trump.”

There is good reason for concern about the Trump administration’s policies on issues including voting rights, refugees, the environment, and access to health care, but it is not a betrayal of progressives’ values to start a conversation with supporters of President Donald Trump by acknowledging their pain and connecting on the level of our common humanity, said DuBois, who is founder and CEO of the D.C.-based community organizing consulting firm Values Partnerships.

As director of the White House office of faith-based initiatives, DuBois accompanied Obama on many difficult trips, including one to Newtown, Conn., following the Sandy Hook Elementary School shooting, and another to the funeral of the Rev. Clementa Pinckney after the massacre at the Emanuel African Methodist Episcopal Church in Charleston, S.C. During this period, he was also privately sending Obama a daily devotional, a practice he continues to this day.

With Obama’s consent, DuBois collected a year’s worth of the short meditations, which became the bestselling book The President’s Devotional: The Daily Readings that Inspired President Obama. Because of this longtime private relationship, DuBois is often referred to as Obama’s unofficial spiritual adviser.

DuBois observed that some people might despair of the state of racial justice, even after eight years of the country’s first African-American president. But Americans cannot ignore the power of a black president speaking from the Rose Garden to say that if he had a son, his son would look like Trayvon Martin, the unarmed black 17-year-old shot down by a neighborhood watch volunteer in Florida. Without Obama, the case may have never reached national attention, DuBois said.

“That doesn’t mean everything, but it certainly means something,” he said.

While many say the angry rhetoric and divisive politics of the 2016 presidential election demonstrate that the forces of racism, misogyny, and xenophobia are on the rise, we must acknowledge that we all share these dark tendencies and we also all share a higher nature, DuBois said.

On Sunday, DuBois preached on this year’s theme of “the fierce urgency of now” for the Martin Luther King Jr. Multi-Faith Celebration at Rollins Chapel, sponsored by the William Jewett Tucker Center. DuBois spoke about the “Beyond Vietnam” speech containing those words, which King delivered at New York City’s Riverside Church in April 1967.

The Riverside Church sermon sought to bind together the anti-war movement and the civil rights movement, DuBois said, quoting King: “We were taking the black young men who had been crippled by our society and sending them 8,000 miles away to guarantee liberties in Southeast Asia which they had not found in southwest Georgia and East Harlem.”

At the time, King was widely condemned for the speech, even by many liberal, white allies, who said he was diluting his core mission. “But his urgency, his fierce urgency, dripping with love and blessed by God—it was right,” DuBois said.

We are today confronted by the fierce urgency of now, DuBois said. “We are entering into a moment in our communities, in our country, and around the world that will require us to stand for what is right—a moment that will demand that we find a moral compass deep within that doesn’t need anyone else to point for us.”