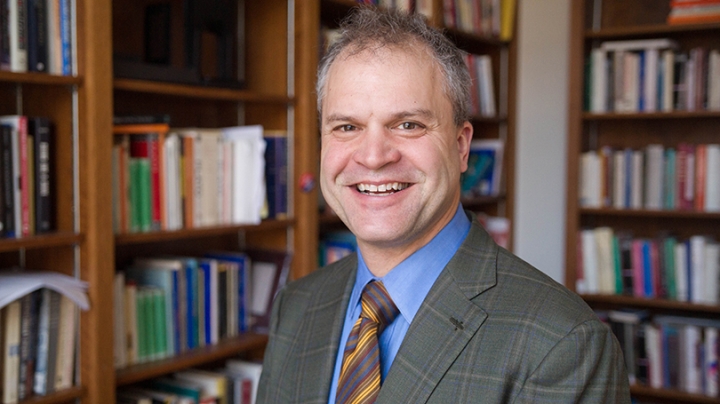 “When both sides are interested in the truth, this kind of debate directly and emphatically serves the mission of a liberal arts education,” says Professor Russell Muirhead. (Photo by Eli Burakian ’00)
1/23/2017
Body

Government professor Russell Muirhead and Assistant Professor of Philosophy David Plunkett have received the 2016 Apgar Award for Innovation in Teaching at Dartmouth for their course “Current Research in Social/Political Philosophy.”

The interdisciplinary, graduate-style seminar for undergraduates explores fundamental political and social questions such as, “What kind of society should we aim to have, and why?” from the perspectives of the political scientist and the philosopher.

The Apgar Award at Dartmouth is the latest in the Awards for Excellence program that was begun in 1982 by Mahlon “Sandy” Apgar IV ’62 and his wife, Anne Apgar. It is presented annually at 15 leading educational and cultural institutions and professional organizations. This is the second year the award has been given at Dartmouth.

Plunkett and Muirhead, the Robert Clements Professor of Democracy and Politics, say they arrived at the concept for the course over a series of conversations, highlighting their disciplines’ different approaches to these questions.

Plunkett says these differences make for rich classroom discussions. “I had been interested in co-teaching and was looking for opportunities to do so at Dartmouth. It was an opportunity for Russ and me to take our conversations into the classroom and have them with students.”

The students joined the conversation along with some of the theorists they discussed, including Yale professor Helene Landemore, whose work centers on democratic theory and constitutional processes, and University of Pennsylvania associate professor Jeffrey Green, a specialist in ancient and modern political philosophy.

Students read, discussed, and debated recent works from these contemporary scholars, and then had the opportunity to meet and question them in the classroom. Muirhead and Plunkett arranged the campus visits with the support of the office of the dean of the faculty and Dartmouth’s Political Economy Project.

The theorists’ visits not only turned theoretical studies into a dialogue, but also modeled the kind of passionate, respectful debate that is essential to scholarship, says Muirhead.

“Students don’t encounter disagreement in an academic setting as often as you might think,” he says. “Some, I think, are uncomfortable with it at first, but then they see that it is possible to disagree and not only be respectful, but also be curious about another view. When both sides are interested in the truth, this kind of debate directly and emphatically serves the mission of a liberal arts education.”

Professor Lisa Baldez, director of the Dartmouth Center for the Advancement of Learning (DCAL) which announced the award in December, says Muirhead and Plunkett’s course exemplifies the qualities the Apgar Award seeks to support—innovative teaching that crosses traditional academic boundaries, particularly involving faculty in the arts and humanities in the early stages of their careers. The Apgar Award at Dartmouth was funded through a gift from Sandy Apgar, and his daughter Sarah Tipper Apgar, Tu’11.

“Dartmouth is known as the model for scholars who teach. We’re pleased to have this opportunity to recognize the excellent teaching that goes on in this class in terms of allowing dialog across disciplines and across differences. These are valuable skills, particularly in today’s environment,” says Baldez, who also chairs the Latin American, Latino, and Caribbean Studies program.

Last year Julie Hruby, an assistant professor of classical studies, and Deborah Nichols, the William J. Bryant 1925 Professor of Anthropology, received the Apgar Award for their course “Who Owns the Past?” The course examined how legacies of the past shape contemporary archaeology, museum practices, and contemporary  governmental policies.

Candidates for this year's award were reviewed by a committee made up of the provost, the dean of the faculty of arts and sciences, representatives of the professional schools, the associate dean of arts and humanities, and the director of DCAL.

Muirhead and Plunkett co-taught their class in the 2015 fall term and plan to offer it again in the 2017 summer term.

— Elli Goudzwaard contributed to this story.