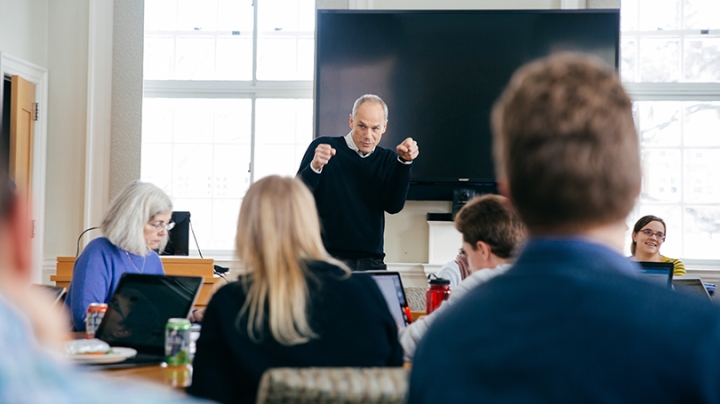 “How do YOU define or explain what reality is and/or isn’t? 50 character minimum.” A blank field sits on my computer screen, awaiting a succinct answer.

The conference room in the Dartmouth Center for the Advancement of Learning (DCAL) is alive with the sounds of fingers tapping on keyboards. Clearly the two-dozen faculty, students, and staff at the tables around me have plenty to say about reality.

We are gathered for a “study hall”—a test run of the College’s newest massive open online course, or MOOC. “Question Reality! Physics, Philosophy, and the Limits of Knowledge" will be taught by theoretical physicist Marcelo Gleiser, the Appleton Professor of Natural Philosophy.

The course, which begins Jan. 31 (registration is open now), will explore the nature of mind, matter, and the cosmos, pushing learners to examine their assumptions and better understand the possibilities—and limits—of science, philosophy, and religion. It’s the latest addition to DartmouthX, a growing collection of MOOCs Dartmouth has been creating since 2014 in partnership with the nonprofit online learning consortium edX.

It’s also part of Gleiser’s Institute for Cross-Disciplinary Engagement at Dartmouth (ICE), whose mission is to explore “the big questions” that “bring the sciences and the humanities into creative engagement,” Gleiser says. ICE was launched this summer with a three-year grant from the John Templeton Foundation.

“The point is not to keep this conversation within academia—it’s not just for the professors or the scientists, it’s for the world at large,” says Gleiser. “So a massive online course is an obvious channel, because you are opening up your conversation to thousands of people. And of course the theme of the course lends itself to precisely that cross-disciplinary mission. We talk about questions that you cannot just look at from a scientific perspective—you have to look at them from scientific, philosophical, theological, and historical perspectives.” 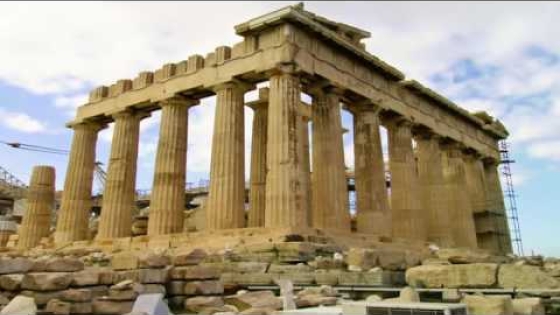 Like earlier DartmouthX courses, the production of “Question Reality!” has been a team effort. Instructional designers Michael Goudzwaard and Adrienne Gauthier are responsible for transforming Gleiser’s ideas into a platform that works for online learners. Video producers Jay Beaudoin and Sawyer Broadley are filming and editing short videos on everything from Plato’s cave to quantum mechanics. And librarian Lora Leligdon has been uncovering resources, paving the way on copyrights, and helping the team test material.

“We’ve been working together for a year,” Gleiser says. “These guys are my family in a sense—it’s been fabulous. They are so professional in their own areas of expertise. What we’re doing is right up at the top, which is great, because this is really putting Dartmouth out there. I’m proud of being part of this.”

The course is also bilingual: It will be presented in both English and Portuguese. Gleiser has a large following in his native Brazil, where he is a popular public intellectual. To date, about half of the nearly 6,000 of those registered for the course are from Brazil.

“I’m proud of the team for pushing ourselves to offer this in Portuguese as well as English,” says Goudzwaard. “As I talked to other institutions in the edX consortium, this issue of how the platform supports learners in other countries is very pressing. We’ve entered Dartmouth into this conversation through this course, and that’s exciting. We have colleagues now in France and Israel and Argentina who are watching how this develops.”

Helping with translation are two undergraduates from Brazil, Gustavo De Almeida Silva ’20 and Rafael Alves de Lima ’20. Both are attending Dartmouth through the King Scholar Leadership Program, a scholarship that helps address global poverty by bringing exceptional students from the developing world to study at Dartmouth.

De Almeida Silva says he’s been surprised and gratified by how much responsibility Gleiser and the course team have given him. “I’m a freshman, and I’ve never worked on a project of this scale and with people who are much older than me. I thought that my responsibilities were going to be very limited, but I am really part of it. I am expected to make suggestions and to take a lot of initiative.”

“It shows the sort of experiences that Dartmouth can offer undergraduates,” says Gleiser. “To go into this course production team and interact not just with a professor and the course material but with a video production person, a pedagogical expert, and all sorts of platforms for editing videos and text is an amazing learning experience for them.”

Back in the study hall, participants are noting bugs in a shared Google Doc and getting up to try a hands-on experiment with a homemade pendulum—a weighted string hanging from a cardboard tube.

Goudzwaard asks the group members to share their first impressions.

Memory Apata, the music library supervisor at Paddock Music Library who served as library specialist for the last year’s DartmouthX course on Italian opera, says she appreciates the way the course “starts in a place that’s very accessible—if you’ve taken seventh-grade science, you have a firm foundation to start going into the ‘ookier’ territory of what is reality.”

“We’ve posted the prerequisite as ‘curiosity,’ ” Gleiser tells her.

Others comment on the design of multiple-choice questions, the quality of the video and subtitles, and the journaling and discussion tools the team hopes will help learners engage with each other throughout the six-week program.

Gauthier describes an assignment called “Ask Your Community,” in which learners ask family and friends, “How do you define reality? What is light?” and bring their answers back for discussion, reflect on what they’ve learned, and think about how they might go back and teach their peers about their new understanding.

Though Gleiser is committed to reaching an international audience with the course, it is also shaping his approach to teaching in the classroom, he says. “I teach a ‘Physics 1’ class here, and I’m thinking about reinventing it with more of a focus on the nature of reality. I’ll be using all these materials. Because I can see how excited the students get when you say this is going to go from Plato’s cave to The Matrix. I’m convinced more and more that to be an effective teacher you have to learn to speak students’ language. And then you do that fundamental thing of an educator, which is you make them want to learn. Which is really what we’re here for.”

Josh Kim, the director of digital learning initiatives, says, “I think of DartmouthX as a tool for research and development around teaching and learning. We’re not only expanding access to learning through online courses, we’re also building collaborative networks between faculty and other professionals on campus that are benefiting students and driving innovation in the classroom.”

Since 2014, the College has produced four DartmouthX courses:

Several others are in the works, including: