“I found out I love to work with my hands to build things,” says David LaCroix ’19. 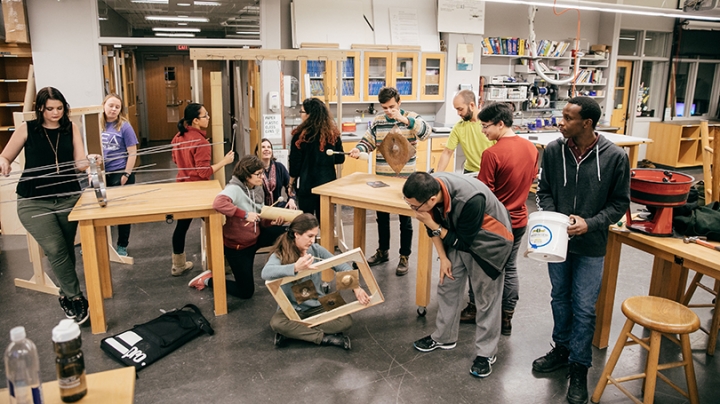 Much of Dartmouth’s campus quiets down between fall and winter terms. But things got pretty noisy in December at Thayer School of Engineering. Participating in a four-day intensive course offered by Thayer in partnership with the Hopkins Center for the Arts, eight students designed and built an array of musical instruments, experimenting with materials, sounds, and structures not found in a typical orchestra.

Brooklyn-based composer Molly Herron taught the course. She’s writing a composition for a concert in May to celebrate Thayer’s 150th anniversary. The student-made instruments are among those to be played by Tigue, a percussion ensemble with ties to Dartmouth, along with three vocalists yet to be named. Herron’s work was commissioned by the Hopkins Center as part of a multiyear project blending science with art, funded by the Andrew W. Mellon Foundation.

Herron has visited campus four times so far to work with Thayer students and faculty. For the instrument-making course, two of the musicians from Tigue—Matt Evans and Amy Garapic—helped the students test and refine their prototypes. Co-teachers were Thayer professors Vicki May and Ulrike Wegst. Hands-on help came from Jeff Georgantes, director of the Donald Claflin Jewelry Studio; Greg Elder, director of the woodworking workshop; and machine shop instructors at Thayer.

“Ulrike and I are both tinkerers,” said May, “and since she studies the acoustical properties of instruments, she’s been really helpful in this course. I’ve always liked interdisciplinary projects and students really gravitate toward them.”

Most of the students were freshmen or sophomores just beginning their engineering programs. MacKenzie Kynoch ’19 is a percussionist who plays in the Barbary Coast Jazz Ensemble. “I’m really interested in acoustical engineering,” she said, “and I think this was just the perfect class for me because it’s putting my big interests and passions together.”

On the first day, students watched videos of unusual instruments and tried out percussion instruments at the Hop. On the second day they learned about metallurgy in the jewelry studio.

“We want to have an earthy, pure tone,” said Lisa Je, who is pursuing a bachelor’s of engineering degree through Thayer’s dual-degree program. “Maybe we can make one keyboard that could synthesize different sounds. Every time we play a key, it could set off different objects, and each object will have its own sound.”

The complicated keyboard turned out to be a bit too ambitious for a four-day course, but Je and others found other ways to create the sounds they wanted by drilling holes into metal pipes, hanging them, and hitting them with soft-headed mallets. For Herron, it was important to give the students enough freedom to set and re-set their own agendas as they navigated the boundary between art and science.

Dave LaCroix ’19 demonstrates a musical instrument he made from a plastic bucket and guitar strings in a class taught between fall and winter terms by composer Molly Herron at Thayer School of Engineering. (Photo by Robert Gill)

“I am interested in allowing people to figure out what engineering means to them and how that can be reflected musically in a real way,” said Herron. “Engineering is so much more than I thought it was before I met these wonderful people at Thayer. It’s a big family. There’s a lot of creativity, a lot of problem solving, a lot of real-world stuff that goes on, and I am so inspired by that. It’s a continuing discovery for me as well as, I hope, for them.”

Meeting a tight deadline, the students were still putting finishing touches on their creations as the sun began to set on the final afternoon of the course. David LaCroix ’19 stretched guitar strings across a plastic gallon-sized bucket. “I added tuners,” he said, as he plucked the strings. “I like that soothing sound.”

During the four-day class, he reconsidered his career goals.

“I had been planning on electrical or computer engineering, but now I’m leaning toward mechanical. I found out I love to work with my hands to build things,” LaCroix said.

When time was up, Herron shouted through a din of saws, hammers, and gongs, “All aboard, who’s coming aboard. Bring your instruments up to the front, please, and let us see and hear how they work.”

One after the other, students demonstrated their instruments assembled from long bamboo pipes, strips of aluminum foil, metal rods, wooden bowls, plastic buckets, and guitar strings. As a finale, musicians Evans and Garapic improvised a percussion piece using the whole suite of inventions. 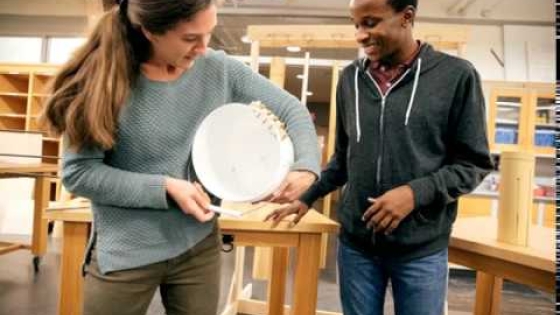 For the first time, the builders could see and hear all their work come together.

“The students accomplished a lot in four days,” said Wegst, looking on. “The opportunity to build something and spend a bit of time at Thayer was wonderful. They grew and learned. And that is always what is most important.”

The concert featuring Herron’s composition and including handmade instruments will be held from 5 to 6 p.m. Thursday, May 4, in the MacLean Engineering Sciences Center at Thayer. It will be free and open to the public.