Judges will try to determine whether the art has been made by computers or by humans. 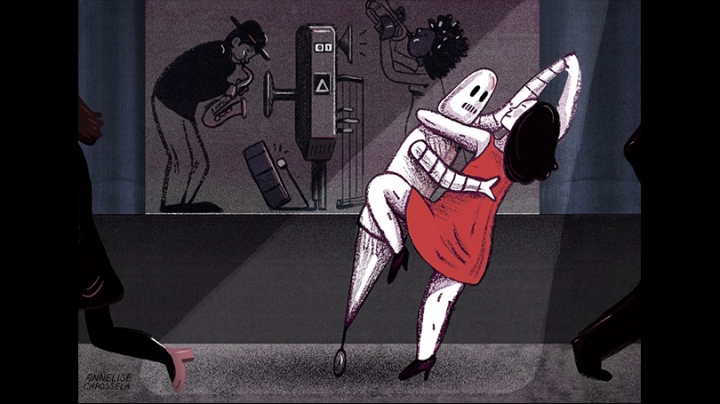 Having trouble finding a dance partner who doesn’t step on your toes? Or a musician to join your ensemble? Want someone to write you a sonnet or a short story? In the future, says Daniel Rockmore, the William H. Neukom 1964 Distinguished Professor of Computational Science, perhaps you could ask your computer to do those things.

That day hasn’t yet arrived for most of us, but computational scientists will blaze trails in that direction with the 2017 Turing Tests in the Creative Arts, now inviting entries and offering cash prizes.

Named for the pioneering mathematician Alan Turing (hero of The Imitation Game), and sponsored by Dartmouth’s Neukom Institute for Computational Science, the second annual Turing Tests ask machines to create sonnets and stories that are hard to distinguish from human output. And, in a new twist this year, computers must convincingly play music—even dance—alongside people.

Last year’s results show that when it comes to literary creativity, it’s still relatively easy for readers to determine whether the language comes from an algorithm or directly from a human brain. Machines asked to make sets of music for dancing—like DJs—had an easier time fooling human voters on a dance floor. However, while Rockmore appreciates the attraction of a competition, he doesn’t see the Turing Tests as sparring matches between humans and computers. Rather, he sees them as a way to spur human innovation.

“You would hope that it inspires people,” Rockmore says. “Competitions are useful because they focus people’s attention on a specific goal. I am a believer that creativity can sometimes be inspired by having fixed goals.”

He also hopes the tests attract the attention and participation of those who might not to think of computer science as a creative outlet.

“If you’re a kid and you read about a computer playing music along with a person or becoming a dance partner, or writing a short story, that might send you down a road you might not have considered,” Rockmore says.

The 2017 contest is divided into four challenges. For PoetiX, machines will generate sonnets. For DigiLit, they complete a short story. In AccompaniX machines will need to accompany a human in a classical duet or jazz jam, and AlgoRhythm requires creation of a digital dance partner.

The AccompaniX assignment is more difficult than the music test was in 2016, says contest co-creator Michael Casey, the James Wright Professor of Music. Last year's contest was a face-off between human and algorithmic music mixes. But since so much of today’s dance music is already electronic, that didn’t really put robotic DJs to the test.

“Now we’re making it harder by saying, all right, computers, you have to come to our game now. They have to be able to play along with a live performance, or a performance that was recorded with a real live human performer. It has to make a convincing accompaniment,” says Casey.

“A lot of old Disney movies would have, say, Dick Van Dyke dancing with an elephant,” he says. “In our test, one of those partners won’t be an animation, but it will be a computational representation—a series of anatomical set points moving around the screen.” The waltz test pairs one motion-capture file, generated by a human dancer, with one created by the machine, and the goal is to synchronize the machine-made steps to the human ones.

The 2017 DigiLit contest also makes a slight adjustment to the fiction-writing challenge. Last year’s entries showed how difficult it is to algorithmically create a story from scratch, Rockmore says. This year, the machine will have to compose an ending to opening passages supplied to the entrants. The idea behind the head start is to create a learning paradigm for the algorithms, one that might take advantage of recent advances in artificial intelligence research.

In addition to Rockmore and Casey, this year’s Turing Tests organizers include Neukom postdoctoral fellows Kirstyn Leuner and Gus Xia,  and former Neukom Fellow (now an assistant professor at Indiana University) Allen Riddell. Neukom partners for the tests with the departments of music, mathematics, and computer science; the 2017 Conference in Computational Creativity; and the Santa Fe Institute.