Why ‘Don’t Even Start’ Doesn’t Work With Teenagers 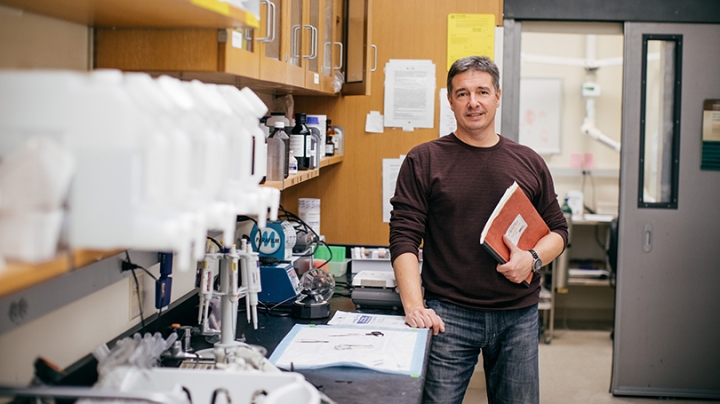 “I think if we can better understand the neural circuitry that results in that behavior, then perhaps we could either behaviorally or medicinally find ways to help adolescents not cross that line,” says Professor David Bucci. (Photo by Robert Gill)
1/09/2017
Body

As parents of a teenager can tell you, adolescents don’t always think about risks before they act, whether it is venturing onto thin ice on a dare or spending the weekend watching an entire Star Wars marathon before starting a project that’s due Monday.

For many years psychologists and researchers have observed this behavior and linked it to data showing that the part of the brain that regulates impulsivity—the prefrontal cortex—is not yet fully developed in adolescents, while the deeper reward-seeking part of the brain, called the nucleus accumbens, develops more rapidly, leaving teens with less control over impulses.

Now Dartmouth researchers have identified and altered the precise neural circuits that control reward-seeking impulses and risk-assessment controls, effectively flipping the switches to create an “adolescent brain” in adult rats.

A brain cell in an adult rat expresses a synthetic receptor after researchers infused it with a DNA-bearing virus fragment. (Photo courtesy of the Neurobiology of Memory and Learning Laboratory)

“What we did is test that theory by simultaneously turning down the neural circuits in the prefrontal cortex while increasing the neural activity in the reward areas of adult rats,” says lead researcher David Bucci, the Ralph and Richard Lazarus Professor of Psychological and Brain Sciences.

This research points toward a range of possible clinical applications, he says.

“I think if we can better understand the neural circuitry that results in that behavior, then perhaps we could either behaviorally or medicinally find ways to help adolescents not cross that line,” Bucci says. “And certainly it has implications, I think, for trying to understand why certain adults will tend to engage in that reward behavior and not keep it in check—overeating, drug and alcohol abuse, risky sexual behavior.”

Bucci and Heidi Meyer, then a graduate student in Bucci’s Neurobiology of Learning and Memory Laboratory at Dartmouth, genetically modified the neurons in these specific regions through a process called Designer Receptors Exclusively Activated by Designer Drugs (DREADDs).

“To be clear, the difficulties that an adolescent might have with the ability to control behavior are not an impairment,” Bucci says. “It’s natural that an adolescent is geared toward exploration, a little riskiness, taking chances. The problem, of course, is when that behavior crosses a line and increases the chance of injury or death or drug abuse.”

“Another side of inhibition, which may be particularly important for adolescents, is using cues in the environment to tell you, ‘Don't even initiate that behavior,’ ” Bucci says.

He uses a downtown street in Hanover to illustrate his point. “So a crosswalk is a stimulus. It can mean it’s a safe place to cross. I get what I want. I get to the other side. However, if you’re ready to cross this crosswalk and you see the Advance Transit bus coming, you should withhold that response and hopefully not do it in the first place—or you’re going to get hit by the bus.”

Using normal adult rats and adult rats with the modified brain function, the researchers tested this inhibition response using a food reward. They played a tone to signal food was coming, but if a light flashed just before the tone, it meant there would be no food reward.

They found that the rats with altered prefrontal cortex and nucleus accumbens took twice as long to learn to inhibit their response when the light cued that food wasn’t coming. In some cases they never learned it as well as the unaltered adults.

In addition, the rats’ delay in learning this inhibitory response matched the delay that Bucci found in normal adolescent rats during an earlier study. The new findings also illustrate how this form of proactive inhibition is age-dependent, which is consistent with the researchers’ previous work on how inhibition is impaired during adolescence.

Adolescent animals are different from adults and preadolescents in many ways—hormonally, developmentally, and physiologically, Bucci says. By testing the effect of this simultaneous stimulation and inhibition, the researchers were able to pinpoint the precise combination of neural activity that causes this behavior in adolescents.

“In previous studies we showed that adolescents have difficulty with proactive inhibition compared to adults and preadolescents,” Bucci says. “Then the question was, is the imbalance we are talking about the causal agent? So we said let’s take an adult, let’s recreate the imbalance, and let’s test that. Sure enough, the treated adult rats have just the same difficulties, to the same degree, as the adolescents, and more so compared to either altering the prefrontal by itself or the accumbens by itself.”

Bucci and Meyer’s research was published in the October issue of Current Biology.