The World’s Largest Land Crab Is Fierce—and Under Threat

An exhibit on campus includes preserved specimens of the gigantic arthropod and artistic renderings. 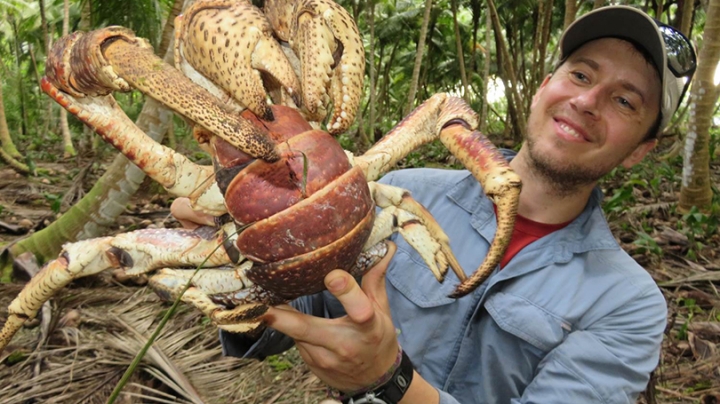 It could be a scene from a science fiction movie: giant, omnivorous crabs—the size of small dogs—feasting on coconuts, which they crush with their claws, and climbing trees in search of live prey. But the enormous crabs are themselves vulnerable—to human predators. “They grow to monstrous size,” Charles Darwin noted when he encountered them in his travels in the 1830s, and “are very good to eat.”

As their numbers dwindle, these “invertebrate dinosaurs” need to be better understood, says Mark Laidre, an assistant professor of biological sciences. With a research grant from the National Geographic Society, he has been studying the crabs’ biology, behavior, and ecology in one of their few remaining strongholds, the Chagos Archipelago in the Indian Ocean.

“These crabs may weigh up to nine pounds, have a leg span of more than a meter across, and live more than 60 years,” says Laidre. Strong and well armored, they are also skilled hunters. Laidre has a paper, which will be published later this year, describing gory details of coconut crabs preying on other animals.

But despite their intimidating size, coconut crabs are in trouble, he says. “People are eating them or destroying their habitat. With sea levels rising, in another 10 to 20 years many of the coral atolls on which they live are going to get drowned.”

The crabs’ longevity is another factor working against their survival as a species. “It’s not hard to totally decimate populations, since it might take 50 to 100 years to fill the void left by the harvested adults,” Laidre says.

Although the coconut crab has not been declared a threatened species, the International Union for Conservation of Nature has classified the species as “data deficient.” This means that “even though the species has become locally extinct on many islands, no one has compiled information over their range throughout the Indo-Pacific,” Laidre says. With a network of collaborators, he is trying to change this, launching an effort to conduct systematic census taking and collecting data on populations’ genetic diversity.

Laidre is spreading his message of protection and preservation, in part by sharing his enthusiasm with schoolchildren and sponsoring an art exhibit, free and open to the public, at Dartmouth’s Class of 1978 Life Sciences Center. “The exhibit includes preserved specimens of the humongous crabs as well as artwork inspired by these extraordinary creatures,” says Laidre. Woodcarvings, paintings, watercolors, glass sculptures, and even sections from a science fiction trilogy (all inspired by coconut crabs) are on display on the third floor of the Life Sciences building.

Mark Laidre has assembled a collection of coconut crab art that's on display at the Class of 1978 Life Sciences Center. In his hand is a glass sculpture that artist Robert DuGrenier made from an impression of a crab in sand (see detail below). (Photo by Robert Gill)

Recently he visited the Frances C. Richmond Middle School in Hanover, N.H., where he spoke with students and gave them an up-close look at a preserved coconut crab. “They seemed to really get a kick out of the crabs,” Laidre says. “That's my new favorite animal,” said one middle-schooler. “Oh, that's gross and scary,” exclaimed another. “But overall, they loved them and some had quite insightful questions about behavior and scientific experiments,” Laidre says.

This term, he is in Costa Rica, teaching a Dartmouth tropical ecology field course that focuses on animal behavior and ecology. Laidre has conducted research in Costa Rica focusing on the social life of terrestrial hermit crabs, close evolutionary relatives of coconut crabs.

In the spring, he and fellow biologist Thomas Jack will co-teach a new course they developed, “Animal Minds,” which will explore how animals, from invertebrates to primates, make decisions.

The decision Laidre thinks most important is one humanity as a whole will have to make about conserving coconut crabs: “Only if we work together will we stand a chance of protecting these amazing animals for generations to come.”