And the Rest Is History: Dartmouth Love Stories 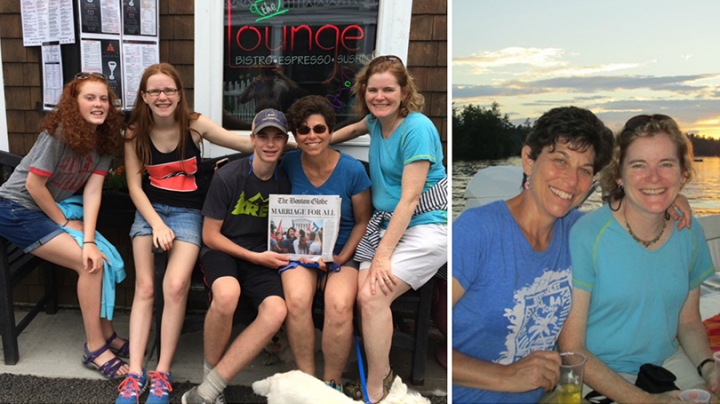 Kelly Bonnevie ’87 and Karen Kaufman ’86 were married in Boston on May 20, 2005: “We didn’t actually meet until after college, but the fact that we had college friends in common brought us together. We have now been together for 25 years.”
2/13/2017
Body

On Valentine’s Day, there’s nothing better than a good old-fashioned love story, and today, we’ve rounded up more than two dozen excellent ones from some Dartmouth couples who met on campus—or discovered each other years after graduation.

Every tale of romance is different, of course, and each one celebrated in this story is unique, but all the stories have a common thread: Dartmouth.

“We met in Salzburg, Austria during a 10-day break in the middle of LSA in Blois and FSP in Toulouse while we were each traveling with friends. I walked into a small subterranean rathskeller in Salzburg and my friend said, ‘Hey, there are some Dartmouth kids. And the rest, as they say, is history! We dated through several semesters apart when one of us was on campus and the other off,” say Lali (Lalita Jayasankar) Haines ’86 and Jay (James) Haines ’87.

“We were working for Dartmouth Dining Services as caterers for reunion events. We met at the Class of 1961 dinner down at the DOC house. The Class of ’61 was a rowdy bunch and it was one of the best events in my four years of catering. During the event setup, Dan stuck out because he kept trying to do that dance move where you stand on the chair and tip it over; I thought he was trying to be Fred Astaire, but he later admitted he was imitating the Backstreet Boys. We became ‘just friends.’ Five months later, during a study break walk, we kissed near the Robert Frost statue,” say Sarah Maxell Crosby ’04 and Dan Maxell Crosby ’02.

Allison (Aboud) Holzer ’00 and Paul Holzer ’00 were married at Rollins Chapel on May 25, 2008: “We loved getting married on campus! May in New Hampshire can be muddy or even snowy, but we had the most gorgeous blue sky day to celebrate.”
Written by
Office of Communications
Share this
FacebookTwitterEmail
In the News