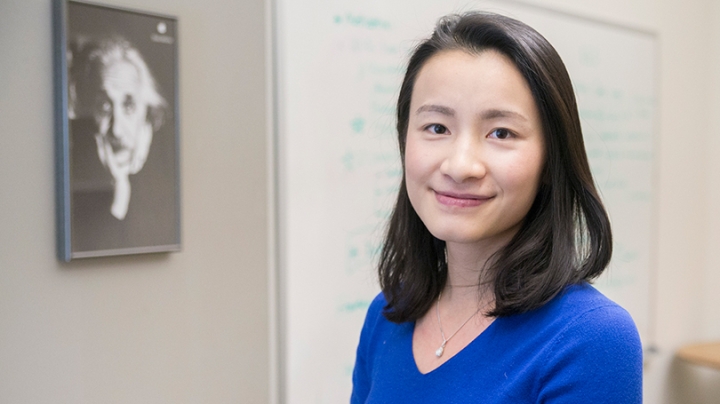 Assistant Professor of Computer Science Xia Zhou has won a 2017 Sloan Research Fellowship in computer science. She will receive one of the 126 two-year, $60,000 fellowships to be awarded this year.

Nominated by fellow scientists, Sloan fellows are selected on the basis of their independent research accomplishments, creativity, and potential to become leaders in their fields, according to the Alfred P. Sloan Foundation.

“This fellowship award only serves to solidify what we have all known for some time now. Professor Zhou is a star and we are incredibly fortunate to be able to count her as one of our own,” says Hany Farid, the Albert Bradley 1915 Third Century Professor of Computer Science and chair of the Department of Computer Science.

“Getting the fellowship is a pleasant surprise for me and I’m deeply honored,” says Zhou. “I think of it more as a recognition of the work we, the DartNets lab, have done as a team. I’m blessed to work with highly motivated, talented students and wonderful colleagues and collaborators.”

Her co-authored paper on a new wireless communication technology won the best video award at “MobiCom 2016: The 22nd Annual International Conference on Mobile Computing and Networking.” Known as “DarkLight,” this technology employs short, almost imperceptible light pulses to transmit information. The research demonstrated for the first time how visible light could be used to transmit data even when the light appears to be extremely dim or nonexistent.

The fellowship will fund Zhou’s ongoing work on visible light sensing. “Our efforts so far have established key system pieces to turn ubiquitous light into a powerful sensing medium. Moving forward, I’m fascinated by the aspect of applying our light sensing system to monitor, analyze, and better understand human behaviors,” she says.

Zhou says practical applications could include monitoring social interactions and behavioral patterns associated with stress, anxiety, and personality as they relate to workers’ productivity in workspaces. “Another application is to monitor activities of nurses and patients in hospitals where radio signals are not desired because of their electromagnetic interference with certain medical devices,” she says.

President of the Alfred P. Sloan Foundation Paul Joskow says, “The Sloan Research Fellowships are extraordinarily competitive awards involving nominations for most of the very best early-career scientists from the United States and Canada. They honor the best young scientific minds and support them during a crucial phase of their careers when early funding and recognition can really make a difference.”

Past recipients at Dartmouth include computer scientists Farid, Gevorg Grigoryan, Fabio Pellacini (now at the Sapienza University of Rome), and astrophysicist Ryan Hickox.

Since the beginning of the program in 1955, 42 fellows have received a Nobel Prize, 16 have won the Fields Medal in mathematics, 13 have won the John Bates Clark Medal in economics, and 63 have received the National Medal of Science. Sloan Research Fellows have included physicist Richard Feynman and game theorist John Nash.