An EPA grant helps researchers find out how much the public values clean water. 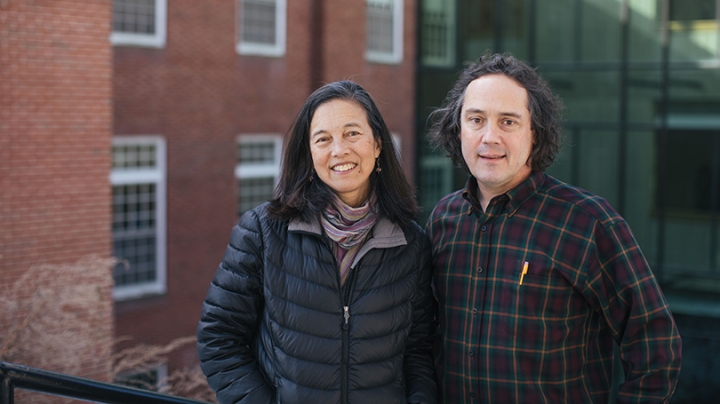 Celia Chen ’78, a research professor of biological sciences, and Richard Howarth, a professor of environmental studies, are working together on a grant supported by the EPA to determine the value of small streams to a fragile ecosystem in southern New Hampshire. (Photo by Robert Gill)
2/07/2017
Body

Two Dartmouth researchers and three colleagues from other schools have received a $797,000 grant from the Environmental Protection Agency to study the way changes in land and water use are affecting the Great Bay watershed in southeastern New Hampshire. The grant seeks to answer three interrelated questions:

The grant comes at a pivotal time in the history of the Clean Water Act. When the U.S. Congress amended the law in 1972, regulations were placed on the discharge of pollutants from identifiable sources into a navigable waterway. But not all sources of pollution can be easily identified at a fixed point. More diffuse, “nonpoint” discharges also affect waterways. It’s unclear how the Clean Water Act pertains to small bodies of water originating on private lands, and the agency is trying to determine how to gauge public support for protecting those resources.

Richard Howarth, professor and chair of Dartmouth’s Environmental Studies program, is on the grant team. He grew up in the region he is studying, in the small town of Lee, N.H., about a quarter mile from the Oyster River, which is part of the Great Bay estuary. He’s seen rapid development in and around his home town over the past decades as homes and businesses have sprouted, new roads have been built, and farmland has given way to shopping malls.

“That place has a rural past and elements of a continuing rural culture. But recently there have been a lot of woods and hayfields and farmland carved out into semi-urban or semi-suburban communities,” Howarth says. And those changes, he notes, have an impact on the environment.

Howarth, who specializes in ecological economics, is working on the EPA-funded project with Dartmouth colleague Celia Chen ’78, a research professor in the Department of Biological Sciences; Mark Borsuk, a former Thayer School of Engineering associate professor who is now at Duke University; Plymouth State University ecological economist Shannon Rogers; and Shan Zuidema, a research scientist at the University of New Hampshire.

“It’s the most interdisciplinary project I have ever worked on,” says Chen. Her role as a biologist is to help compile a list of stream attributes that define water quality in the Great Bay area.

Other team members are assessing how the public views those natural attributes.

Howarth says there are two main ways to gather public opinion about environmental issues: opinion surveys and an alternative method that involves, in the case of Great Bay, educating people before seeking their input on a proposed plan to regulate or mitigate pollution.

“Surveys can be big enough to include a lot of input, but the disadvantage is that people tend to reach off-the-cuff conclusions that may not be based in fact,” he says.

Instead of polling a randomly selected group of residents, he says, “You can hold all-day workshops where scientists and technical experts give presentations, and field questions from lay stakeholders brought together in groups.” The public opinion sample size is smaller in that case, but the benefit is that citizens become educated before stating their views on the issue at hand.

No matter which decision-making model is adopted, Howarth hopes the study supported by EPA will help people in the Great Bay region reach a consensus on thorny environmental problems.

It will take him and his team at least a year to develop a framework for linking the health of small streams to the larger ecosystem, and to the local economy. Meanwhile, there are questions about whether scientists funded by the EPA will be allowed by President Donald Trump to share their findings with the public.

“I’m not sure what the future holds in terms of federal policy,” says Chen, who is also a project leader in the Dartmouth Toxic Metals Superfund Research Program. “But luckily the Great Bay watershed is already a place where local groups are working together to preserve this fragile tidal system. Aquatic systems are connected to each other, and as we scientists find out what that connectivity means for these ecosystems, it’s incumbent on us to communicate it.”