The archaeologist was recognized for his work on the Aegean Bronze Age. 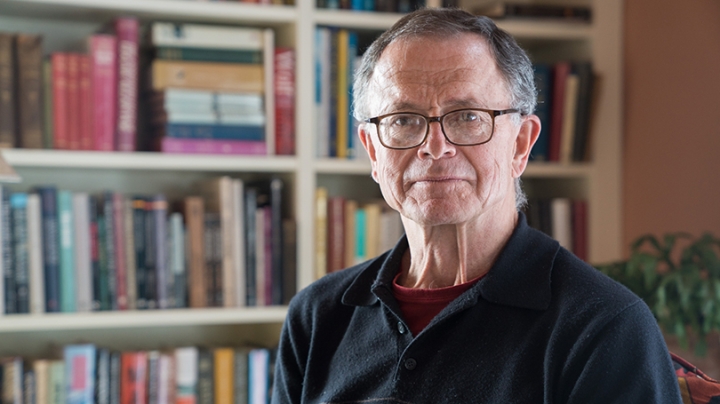 Jeremy Rutter is the Sherman Fairchild Professor Emeritus in the Humanities and professor emeritus of classical studies. (Photo by Eli Burakian ’00)
2/12/2017
Body

“I don’t expect to collect a whole lot of honorary degrees, so this was very cool,” says archaeologist Jeremy Rutter, the Sherman Fairchild Professor Emeritus in the Humanities and professor emeritus of classical studies, of the honorary doctorate he recently accepted from Uppsala University in Sweden. “It’s a recognition from a peer group that is very special. I feel great about it.”

He received the honor during a conferment ceremony held in a 14th-century cathedral. “I was sitting about 15 feet away from where the great Swedish conquering king Gustavus Adolphus was crowned in 1617, exactly 400 years ago,” he says.

Uppsala and Dartmouth are members of the Matariki Network of Universities, a consortium of seven international institutions. The network, which Dartmouth joined in 2010, facilitates collaboration and the exchange of knowledge and resources among its members.

“I’m thrilled that Professor Rutter’s many career achievements are being honored by Uppsala University in this way,” says Barbara Will, associate dean for the arts and humanities. “This is wonderful for him and for the Matariki partnership as well.”

The degree recognizes Rutter for his contributions to archaeology over his long career and his mentorship of more than two generations of scholars.

“Jerry is very good at what he does,” says Michael Lindblom, an associate professor in Uppsala’s Department of Archaeology and Ancient History who helped organize Rutter’s nomination for the honor. “He has deepened our understanding of the Aegean Bronze Age, and he is always willing to engage with and help younger colleagues.” In a relatively small discipline, he says, this has made a large impact.

An expert in Bronze Age Minoan and Mycenaean pottery, Rutter received the Archaeological Institute of America’s Gold Medal in 2013. “When I got that I thought, it can’t get any better than this,” he says.

The son of a foreign service officer, he traveled extensively as a child and even visited ruins, but he didn’t discover archaeology until he was undergraduate at Haverford College in Pennsylvania. “I was fully intending to become a research chemist, but after a couple of years of classes, I realized this was not going to work.”

Looking for another major, he attracted the attention of the chair of the classics department, who coached the school’s cricket team. “I had learned to play as a kid in England when my father was in the embassy. It turns out that the second-oldest intercollegiate event is the Haverford-Penn cricket match,” he said. He was recruited for the team—and the major.

Archaeology was a good fit. “It’s important to me to travel—I like to be in foreign places speaking foreign languages. And there’s that sense of discovery. You find things. It’s all serendipitous. If you like to rough it a bit, you don’t mind getting dirty, you like telling tall stories about the time something fell on top of you, and so on—I mean, there’s a little bit of Indiana Jones in all of it.”

His graduate studies at the University of Pennsylvania were interrupted by the Vietnam War, when he was drafted into the Army. “I got lucky and was pulled out to be a radio operator,” Rutter says. “But by the time I got out, my place on an Italian excavation had been taken. I had to find something else to do, so I ended up going to Greece.”

One of his favorite finds was as a graduate student, digging potshards at the site of an early Greek colony. “One of the shards looked different from the others. We washed it up and found it had an inscription painted on it, which means the guy who painted the pot was able to write. This was in the first 50 years of the use of the Greek alphabet. It was the end of a name written right to left, and then a little punctuation mark and the beginning of the word for ‘he made it.’ This is the first artistic signature that we have in Greek archaeology. It’s in many handbooks now. There’s no asterisk that says ‘found by J. Rutter,’ but who cares?”

Archaeological scholarship, he says, “is basically putting together narratives. You make up a story to explain the stuff you find, how it was used, what its social implications were, and so on. And every time a new discovery is made, it can totally change the story. It’s an endlessly creative process. The challenge is to keep thinking of interesting new perspectives—that’s fun.”

Rutter joined the Dartmouth faculty in 1976. At the time, he says, he didn’t plan to stay in Hanover long. “In grad school we were acculturated to believe you needed graduate students so you could direct the research in your field,” he says. But he soon came to appreciate Dartmouth’s focus on undergraduate education.

“Great students, great facilities, plenty of support for your research, and endless opportunities to experiment in your teaching—what’s not to like?” he says.

While most of his students have not gone on to become archaeologists, Rutter says it’s important for all students to be introduced to the concept of time depth.

“It is fundamentally important to understand how we got here,” he says. “The path of human progress is not a straight line. There are periodic collapses. In fact, we may be living in such a period. We haven’t had a major collapse in a while. It is the nature of civilization that there is this oscillation. Archaeology encourages people to think about how malleable societies are.”

He may have retired from teaching, but he is still engaged in research and scholarship, most recently working on an Austrian excavation in Greece. “I’m still looking for interesting ideas,” he says.

Rutter and Lindblom say the Matariki Network is deepening ties between Dartmouth and Uppsala. Through the partnership, Lindblom is currently at Dartmouth finishing a book.

In addition, Uppsala is home to a large collection of Bronze Age context pottery. “There is just a host of research projects with real material, and they don’t have enough students right now in Uppsala to work on that. Dartmouth could perhaps supply students to go to Sweden to work on that material,” Rutter says. “I think that’s what Matariki is about—establishing connections and collaborations between people.”