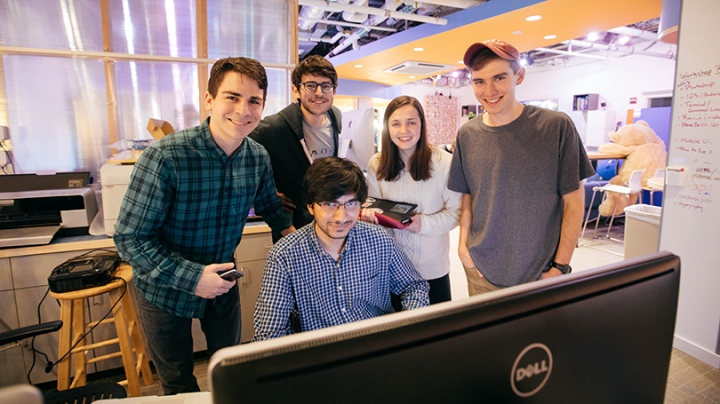 “It pays to be heard.” That’s the slogan for College Pulse, a new student-centered confidential platform for gathering public opinion on a range of topics. Students can take surveys via computers or mobile devices while learning their peers’ views about Dartmouth. Participants reap rewards—a free pizza, say, or a vintage Winter Carnival poster.

Pulse (not to be confused with a College wellness site by the same name) questions students about campus life—including the Greek system—politics, even sexuality. Answers are aggregated by respondents’ race, gender, and ethnicity, among other categories.

Terren Klein ’17, who, with a team of software developers, created Pulse, sees it as a window on the College experience.

“I think students should have an easy way to access accurate data about their community,” Klein says. “And the free and open sharing of opinions helps communities identify and solve problems better.” But he also says that busy students don’t always like to carve out time for taking surveys, unless they get rewarded for filling out questionnaires, and can see how their peers weighed in on college life.

Klein came up with the idea for an incentive-based opinion poll app during his sophomore summer, when he was working in Dartmouth’s Office of Institutional Research.

“I saw a problem,” he recalls. “The office was conducting surveys, usually via email, about campus life, but it was sometimes having trouble getting students to respond.”

With a Stamps scholarship and support from the Dartmouth Entrepreneurial Network (DEN), the Office of the President, and the DALI Lab, Klein started working with fellow students, including Robin Jayaswal ’18 and Ben Packer ’17, on what has become a user-friendly survey site. Others on the DALI design team include Kyle Dotterrer ’18, Ahsan Azim ’18, Chris Yih ’18, Shuoqi Chen ’18, and Jessie Anderson ’18.

By answering questions posed by Pulse, students can rack up points for participation and cash them in for their choice of gifts or services from Upper Valley merchants.

But Klein thinks freebies aren’t the biggest reason people log on to Pulse. More valuable than haircut discounts or free milkshakes, he says, is the information students can glean about their College. “We’re changing the transactional proposition,” he says. “Instead of saying please take our survey and you get a set of headphones, or whatever, we are saying hey, you can get paid to learn what your community thinks about issues you may find personally important.”

Klein, a government major doing an honors thesis about the use of smartphones in survey-based research, believes it’s important for online opinion polls to display results. “Data sharing has to be built into data collection,” Klein says. So Pulse users can view charts and graphs showing how the students who were surveyed feel about a wide range of topics.

For example, asked whom they might prefer for a graduation speaker, more people wrote in television producer Mindy Kaling ’01 than wrote in Michelle Obama.

Benjamin Valentino, an associate professor of government who heads up the honors program, says Pulse breaks new ground in data-gathering by allowing people to quickly and easily see how their views compare with those of others who are like—or maybe unlike—them.

“I think it will be extremely useful, not just for Dartmouth, but outside the Dartmouth setting,” says Valentino. “This could apply to large businesses, or small communities, to try to get a sense of how their group is feeling about changes or new policies that are in front of them. It’s an amazing platform. A quite impressive piece of work for undergraduates to put together.”

The Pulse team does its own surveys and also collects data for clients, including the Office of the Provost, The Dartmouth, the Dartmouth College Student Assembly, and the Dartmouth Outing Club. Students may use the website to suggest topics. Klein says the average response rate hovers around 40 percent.

Klein says Pulse users spend, on average, three minutes reviewing the data on the site. “We want students to see that taking surveys is not just financially rewarding; they can help you better understand your community—how different kinds of people hold different opinions,” he says. “I think that promotes a healthy respect for diversity.”

Opinions do vary at Dartmouth, and the app sorts them by sub-groups. For example, surveys show that athletes who responded to Pulse are more likely to have a favorable view of the College administration than non-athletes. In Pulse surveys, incoming students are more supportive of Dartmouth institutions than other respondents. Fifty-five percent of the students questioned said Dartmouth was their first choice when applying to colleges. Students whose parents did not attend Dartmouth are three times more likely to have a favorable view of dining services than legacy students. Women students, it turns out, like reading the campus newspaper, The Dartmouth, more than male students do.

Klein says other colleges and universities started showing interest in Pulse following a presentation he made, with support from the Knight Foundation, at an American Council of Education conference in Washington, D.C. last fall. Between fall and winter terms, he attended DEN’s forum on the West Coast, where he met venture capitalists intrigued by the app.

For now, though, he says the primary focus is on Dartmouth, where he hopes Pulse will give students an alternative to gossip and hearsay and provide administrators with an accurate view of students' opinions.

“Without a reliable source of public opinion information, students either speculate, talk to a small circle of friends without really understanding if they represent the community, or rely on platforms like Yik Yak, which are anonymous and lead to distorted opinions,” says Klein.

On the other hand, he says, Pulse paints a well-documented picture of Dartmouth, one question, and one answer, at a time.