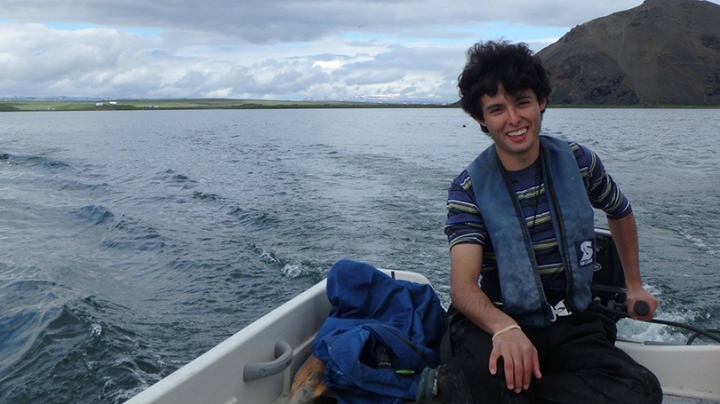 Aldo Arellano ’17 travels the waters of Iceland’s Lake Mývatn, where he conducted research this past summer. (Photo by Jamie Botsch, Emory University)
2/22/2017
Body

Aldo Arellano ’17 spent last summer in Iceland, mostly looking at tiny insects to get a big picture: how midge flies affect the ecosystem in the Nordic island nation.

Arellano was working in the field with an interdisciplinary student team researching the ecology of Iceland’s Lake Mývatn. They studied midge flies and their role in the food webs, in the water and on the land. Mývatn is Icelandic for “the lake of midges,” aptly named for the huge numbers of the tiny insects that hatch there in the summer.

“At first glance, midges swarming on the lake surface don’t seem very important, but they actually play a keystone role in the aquatic and terrestrial ecosystems,” says Arellano. Changes in the timing and volume of their emergence affect other parts of the food chain. “We looked at what has happened in the past, seeing how midge fly emergence times are varying, whether or not there were multiple emergences in a year, and how they are influencing other populations, such as the fish in the lake and the terrestrial spiders that feed on them.”

In a cloud of emerging midges, clockwise from top, Rebecca Blundell of Michigan State University, Dartmouth’s Aldo Arellano ’17, and Jamie Botsch of Emory University deploy traps around Lake Mývatn to collect the insects.

Scientists are still looking for answers about why these changes are happening. “We are interested in possible effects of climate change and thermal acclimation,” he says, the latter being the ability of a plant or animal to successfully adapt to temperature changes.

Arellano was one of the expedition’s four interns—two undergraduates and two graduate students—who were drawn from schools across the United States to participate in “Research Experience for Undergraduates,” a summer program funded annually by the National Science Foundation.

In addition to the overarching midge studies, each student pursued an independent project. “We had a number of these going on at the same time,” Arellano says. “They varied from looking at basic plant species to examining arthropod communities, investigating the movement of the little spiders around the lake and how that was affected by midge abundances.”

Arellano’s project dealt with Anabaena, one of the blue-green algae that also bloom in Lake Champlain, some of which produce a deadly toxin.

“In Iceland, Anabaena appearances may correlate with the emergence of the midges,” he says. “We want to understand what causes these algal blooms and if it is possible to predict them.” His findings may have implications not only for lake environments in Iceland, but for lakes in New England as well. Arellano will be using his Icelandic research as the basis of his senior honors thesis.

While the days were long and the work exacting, Arellano and his coworkers did have some time for recreation. “We had a few off-days where we got to explore northern Iceland and get a sense of the ecosystem we were working in,” Arellano says. “We climbed mountains and hiked through canyons, once discovering a waterfall that wasn’t even on the map. It was just the most beautiful waterfall I’ve ever seen. We were interacting with the landscape in a way that was more than just studying, but also enjoying it.”

Arellano had done fieldwork before his trips to Iceland and Costa Rica. He also participated in a Russian Language Study Abroad program during his college freshman summer, which took him to St. Petersburg, Moscow, and Novgorod. Russian language and literature became his second major, after biological sciences, ultimately leading to his selection as a 2017 Russian Scholar Laureate.

During his sophomore summer, he began working with Professor Kathryn Cottingham, chair of the Department of Biological Sciences. “I assisted with bacteria sampling in Lake Sunapee, my first exposure to the field techniques and procedures I would later use in Iceland. I also worked with different aquatic microorganisms in the lab, exploring the variation of certain traits over dynamic environments,” he says.

Arellano also worked as a teaching assistant in “Introductory Ecology” and “Microbiology” courses and then as research assistant in Cottingham’s lab, positions he still holds. Cottingham is also Arellano’s adviser for his biology major.

Arellano’s interest in the world of biology was strengthened during his junior winter, when he traveled to Costa Rica and the Cayman Islands with the Biology Foreign Study Program.

“It was similar to the Iceland experience in that we were constantly doing research in incredible environments,” Arellano says. “Over six weeks, we did a series of short-term projects, each designed by student groups. We moved across different locations in Costa Rica, exploring diverse ecosystems. We would go out for a day and make observations, and then build a project around our field notes.” The students worked at a marine laboratory on Little Cayman Island.

Arellano says that today he is a better scientist due largely to his experiences in Costa Rica and Iceland. “In a classroom lab setting, there are protocols for you to follow. When conducting your own research, either in the lab or in the field, you are not going to have these protocols because everything is novel and different, and always changing. You must have that capacity to adapt, and I feel like I have at least started to acquire that ability by engaging in these experiences.”

The experiences have helped him figure out what he wants to do after graduation. “I want to pursue my studies in science, eventually working in areas where there are practical applications of the science.”