Dartmouth recently had a brief but spectacular display of giant snowflakes. 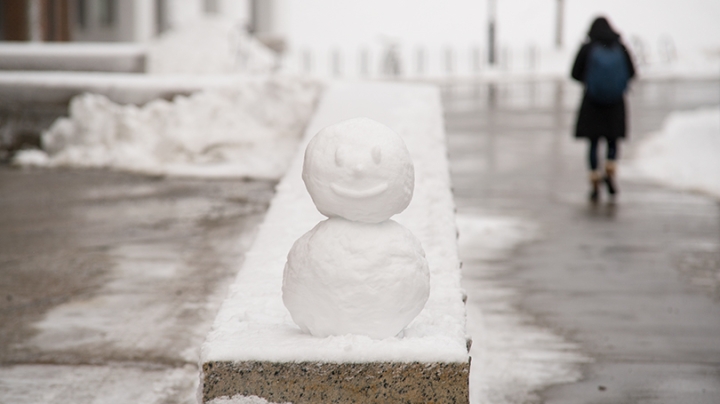 Today’s storm is adding to the approximately 20 inches of snow Hanover has seen so far this season, just in time for Winter Carnival on Friday. Navigating through a snowstorm can be fun for some and challenging for others, but for aficionados like Dartmouth’s Mary Albert and Robert Hawley, snow is a source of endless fascination.

Prompted by a display last week of half-dollar sized snowflakes, the two veterans of Greenland and Antarctic research offered some insights into the nature of snow.

Albert, a professor at Thayer School of Engineering, was captivated by the storm of giant flakes. “It was striking, it was very pretty, but it didn’t last for long. Like too many beautiful things, sometimes they are fleeting,” she says.

“Typically we get smaller snowflakes,” says Albert. “But what you probably saw were stellar dendrites—the typical six-sided snowflakes that look like fancy stars. Snow comes in many different forms but those are probably the most famous because they are the prettiest ones, all different from one another.”

Stellar dendrites are the most recognizable snow crystals, or snowflakes. (Photo by Kenneth Libbrecht, California Institute of Technology)

Albert explains that as the flakes fall through the air, any water vapor that they encounter tends to condense onto the crystals. “Right around freezing, the ones that fall are smaller. When the large snowflakes were falling, the temperature was lower and the air was likely supersaturated with vapor,” she says. “Under those conditions, the moisture condenses onto the snowflake and you get much bigger flakes.”

Hawley, an associate professor of earth sciences, also weighed in on the science behind the flakes. “Each snowflake is unique,” he says. “The reason no two snowflakes are alike is that their appearance is directly related to and influenced by the atmospheric conditions in which they formed and through which they have fallen. The two biggest contributors to these differences are the temperature high up in the atmosphere where the snow forms, and the amount of water vapor in that atmosphere.”

As to their size, Hawley says, “To a large extent, this has to do with the ability of the snowflake to actually make it to the ground without vaporizing or breaking into smaller pieces.”

And today in Hanover, it is still snowing—small flakes and lots of them.