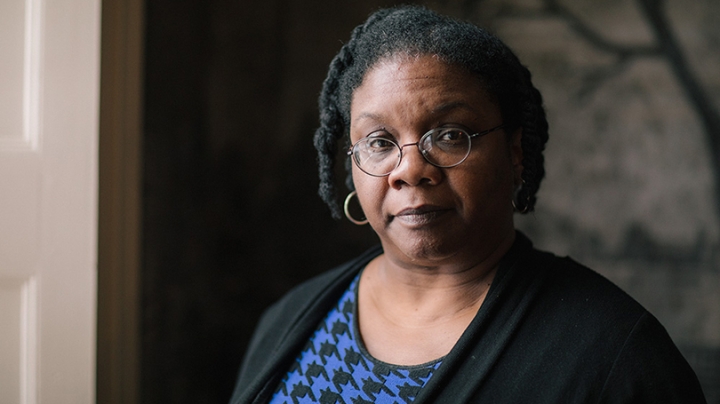 feel as if I were both the plucked and the child

plucking the stem and twirling. How a single word

can set the world turning from one moment into

the next in startlement.

These lines from Associate Professor of English Vievee Francis’ A Small Poem—the penultimate verse in her collection Forest Primeval—might describe her emotion last week when she learned that the book had won the 2017 Kingsley Tufts Poetry Award.

The Claremont Graduate University-based prize, now celebrating its 25th anniversary, honors a mid-career poet with a prize of $100,000—the largest cash award in the world for a single book of poetry. Francis will formally receive the award at an April 20 ceremony at Claremont.

When she heard the news, in a telephone call, she says, “I was too busy crying and going ‘Oh, my gosh!’ to really hear anything. I was over the moon—and especially pleased because I was in such extraordinary company. It feels unreal, in the best way.”

“This latest honor for Vievee Francis’ stunning book Forest Primeval shows once again how significant her work is,” says Barbara Will, associate dean for arts and humanities. “Vievee is redefining the poetic tradition through her absolutely unique vision and this honor is a testament to her achievement.”

“Francis is reclaiming modernist and feminist legacies of poetry, and it takes great courage to do that,” says award committee chair and Poetry magazine editor Don Share in the prize’s press release. Share calls Forest Primeval “an intense work, dark … Dantean … dreamlike in its visions.”

Francis joined the Dartmouth faculty this past fall. “It’s been a very welcoming experience, period,” she says. “And when one feels welcomed, it’s easy to go to the office every day. It’s a joy to go to class.”

An associate editor of the journal Callaloo, Francis has taught as visiting faculty at Warren Wilson College and North Carolina State University. Forest Primeval, published by TriQuarterly Books/Northwestern University Press, her third collection of poems, received the 2016 Hurston/Wright Legacy Award and was shortlisted for the 2016 PEN Open Book Award.

As A Small Poem suggests, Francis believes in the power of language. “Obviously if I think a word can change us, I think a poem can,” she says.

Francis is “unabashed about who she is, and she shares that with her students,” says Michael Sun ’19, who is taking “English 82: Writing and Reading Poetry” with Francis this term. “It allows other people to be themselves around her.”

As a teacher, “she doesn’t pull any punches,” Sun says. He calls Francis’ approach “tough—red ink on the page just bleeding through the entire paper. But at the same time, she’s unbelievably caring. She’s constantly pushing me to be better. She takes teaching to a level of true mentorship.”

“I want students to see what the world is for a practitioner, and I want them to value it,” Francis says. “I kind of drop them into the deep end of the pool. For the time they’re in my class, we really are a group of writers learning together. I teach by iteration and digression. We might have a main theme we’re moving through, but we’ll fall off in this direction or the other and come back around. We do a lot of reading, and we write.”

“Professor Francis really pushes for a deeper criticism of the self,” says Sun. “She’s impressed on me the idea of writing to challenge my reader. There’s a way to build tension to make a person feel uncomfortable in a productive way. Considering how polarized our country is and how insular people can be within their own circles of thoughts and values, art needs to reach people beyond yourself.”