The gift from Frank Guarini ’46 will support off-campus and foreign study programs for undergraduates. 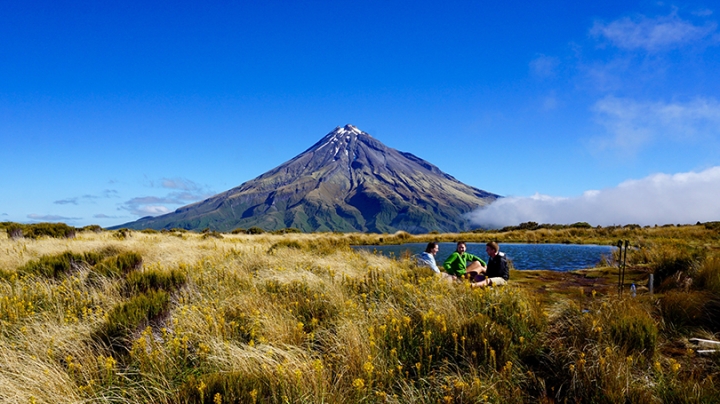 Guarini’s philanthropy will create new opportunities for students to study in countries around the world, learn from people across many cultures, and expand their expertise in language, diplomacy, and global issues across the spectrum of arts and sciences.

“I hope this increased endowment will inspire more students to travel abroad,” says Guarini. “There is no better way to promote peace in our world than for young people to immerse themselves in different cultures, getting to know new people and expanding their worldview firsthand.”

“Frank Guarini has committed his life to public service, in our country and abroad, and has long been an advocate for better international understanding,” says President Phil Hanlon ’77. “I’m thrilled that this new gift to Dartmouth will advance that cause for generations to come and build on our commitment to providing students and faculty, alike, with opportunities to work across cultures and across disciplines, gaining new perspectives and valuable leadership skills through hands-on teaching and learning.”

Guarini received a Naval Commendation Medal and three Battle Stars for his naval service during World War II. He earned his JD and LLM at New York University School of Law, and studied at The Hague Academy of International Law. He went on to serve in the New Jersey State Senate for two terms and served as a member of the U.S. House of Representatives for seven. In 1979, he was a member of the first trade mission that met with Chinese leader Deng Xiaoping and helped develop a broader world trade policy for China. He served as a delegate to the North Atlantic Treaty Organization in London, and he was appointed by President Clinton to serve as U.S. representative to the General Assembly of the United Nations.

The alumnus served as president and chair of the National Italian American Foundation, was chair of the board of regents and trustee of St. Peter’s University, in New Jersey, and chairs the board of trustees of John Cabot University, in Rome. He received Italy’s highest decoration, the Knight of the Grand Cross of the Order of Merit of the Italian Republic, bestowed on him by President Giorgio Napolitano.

In 2013, Guarini made an initial commitment of $10 million to endow the Frank J. Guarini Institute for International Education, encompassing Dartmouth’s Off-Campus Programs office, which strengthened programs in Europe and helped develop new ones in Africa, eastern Asia, and Central and South America.

The initial commitment also endowed an associate deanship in international and interdisciplinary studies, a position devoted to the creation of a global, interdisciplinary learning environment on and off campus. The institute offers more than 40 off-campus venues through Dartmouth Language Study Abroad (LSA), Dartmouth Foreign Study Programs (FSP), and Dartmouth Exchange Programs. More than 600 undergraduates participate in one of the programs each academic year in language study, government, economics, the sciences, history, and classics.

The new commitment will allow Dartmouth to build upon its leadership in foreign study by creating more learning opportunities in the developing world, and for the integration of course study and experiential learning where students learn to collaborate around global challenges in foreign environments. It will allow Dartmouth to develop new experimental international programs that meet the needs of students and faculty—interdisciplinary studies in anthropology and environmental science in Africa, for example, or classics and computer science in Europe.

The gift will support flexible, shorter international programs designed for students with heavier time commitments, such as athletes and premed students. These will include on-campus courses with a foreign study component—for example, a course in Chinese economic policy with two weeks in Beijing exploring a specific economic problem.

In addition, the commitment will be used to create opportunities for students in areas not yet reached by the institute in Eastern Europe, Africa, Asia, and Central America. Dartmouth has 14 language study abroad programs—nine of them advanced—covering Arabic, Chinese, Portuguese, Japanese, Russian, French, Italian, German, and Spanish. With the new commitment, Dartmouth will continue to enhance these programs.

“Foreign study and off-campus programs are a shining light at Dartmouth,” says N. Bruce Duthu, the Frank J. Guarini Associate Dean for International Studies and Interdisciplinary Programs. “It is incredible to see students transformed by their off-campus cultural experience and sharing new knowledge back at Dartmouth with their peers. Enhancing the Guarini Institute will give more students opportunities to learn across cultures, engage in deeper dialogue with one another, and gain new perspectives on a range of issues confronting our society and the world.”

Dartmouth has long been at the forefront of global education dating back to the era of President John Sloan Dickey and his creation of the Great Issues course in 1947, designed to introduce students to issues of international consequence. Dickey also established the Northern Studies program focused on polar research, and oversaw the opening of the William Jewett Tucker Foundation in 1951, whose volunteer programs include outreach to underserved communities in the U.S. and Latin America.

Foreign study began at Dartmouth in 1958 when two students enrolled for a year at the University of Madrid under the direction of Professor of Romance Languages and Literature Robert Russell. In 1967, John Rassias, the William R. Kenan Professor of French and Italian, introduced the LSA program with a session in Bourges, France. In 1982, Dartmouth established the John Sloan Dickey Center for International Understanding, which oversees a variety of global programs, foreign study internships, and fellowships, providing students with comprehensive training in global issues.

The Dartmouth D-Plan is well suited for off-campus and international programs, giving students a rich array of choices four terms a year. Individual faculty design and lead the programs onsite, often serving as mentors to their students. Students travel as a group and live with local families, some of whom have hosted Dartmouth students for generations. Dartmouth is just one of a few institutions in the U.S. to design programs in this independent manner, with no outsourcing.

“There is no greater champion of the distinct advantages of a Dartmouth education than Frank Guarini,” says President Hanlon. “As we look to prepare students to lead and thrive on a diverse, global stage, his recent gift will help strengthen and secure Dartmouth’s place as a beacon of cultural learning.”