Applications Are in for the Dartmouth Class of 2021

For the third consecutive year, the number of applicants exceeds 20,000. 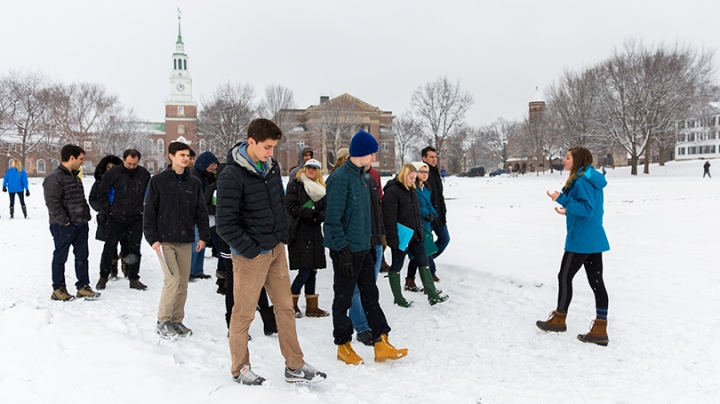 Prospective students on an admissions tour of campus. (Photo by Joshua Renaud ’17)
3/01/2017
Body

Dartmouth has received 20,021 applications from students seeking admission to the Class of 2021, marking the third consecutive year that the College has exceeded 20,000 applications for its first-year class.

“As admission officers are reviewing the regular-decision applications, we are struck by their academic and personal power. The College has attracted an impressive pool of candidates for the Class of ’21, and we are excited to be ‘meeting’ them through their applications as we shape the next first-year class,” says Lee Coffin, vice provost of enrollment and dean of admissions and financial aid.

Applicants to the Dartmouth Class of 2021 hail from 7,209 high schools in all 50 states, Washington D.C., Puerto Rico, and the U.S. Virgin Islands, as well as from 138 foreign countries. Applicants’ top three home states are California, New York, and Massachusetts, and the leading three countries of origin for international students applying to the College are China, India, and Canada.

The admissions staff has begun the process of reviewing regular-decision applications and will communicate decisions to candidates on March 30, which is the Ivy League release date.

Once students are admitted, the College will hold a variety of events, both on campus and around the country, to help prospective students learn more about the Dartmouth experience. On campus, the admissions office will host Dimensions of Dartmouth, two campus programs for admitted students, scheduled for April 13 and 14, and April 24 and 25. In addition, Coffin says, the College is planning a number of off-campus events, hosted in conjunction with alumni volunteers around the country and the world.