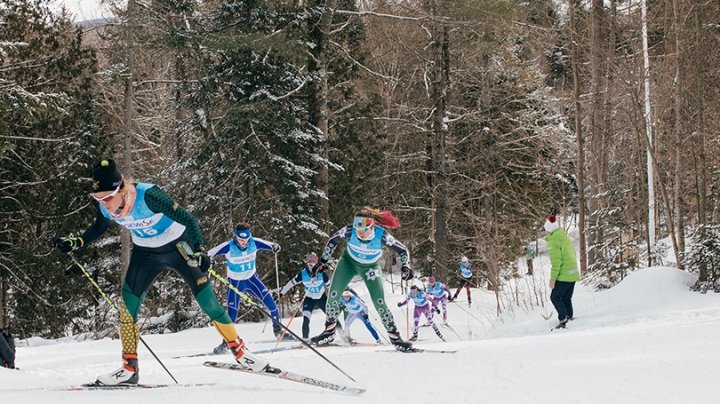 During this year’s Winter Carnival, Taryn Hunt-Smith ’19 takes the lead in the Women’s 3x5K freestyle relay in the Nordic races at the Craftsbury Outdoor Center. (Photo by Robert Gill)
3/07/2017
Body

The last time the NCAA Skiing Championships took place in the state of New Hampshire, Dartmouth won the national title. Ten years later, the Big Green have their sights set on another crown.

Dartmouth enters this year’s national skiing championship, hosted by the University of New Hampshire at Franconia and Jackson, N.H., having won five of the six Eastern Intercollegiate Skiing Association carnivals, including the East Regional two weeks ago for the first time in five years.

The championships begin today at Cannon Mountain, with the giant slalom as the women start at 11 a.m. EST and the men at 2:30 p.m. EST.

As one of the seven schools with a full complement of 12 skiers participating, Dartmouth is poised to make a run for its fourth national title. Other schools to feature a complete dozen are Alaska Anchorage, Colorado, New Mexico, Utah, Vermont, and the defending champion, Denver.

Since the Big Green last won the championship, Colorado and Denver have dominated as the two schools have combined to win eight of the last nine years with each earning four. Only Vermont has been able to break that stranglehold, besting the field by a whopping 161 points that year. No other team has won a national title by more than 100 points since Utah in 2003. And other than Dartmouth’s crown in 2007 and the Catamounts’ in 2012, no other team from the East has won the title in the past 22 years.

The Big Green skiers are loaded with experience in the alpine events, with five of its six skiers competing having competed in last year’s NCAA Championships, all of whom earned All-America honors in one of the events. All three Dartmouth women represented the program last year, led by Foreste Peterson ’18, who was a first-team All-American in the giant slalom last year by finishing fifth. This year she is the second-ranked skier in the East with three carnival victories to her credit.