Professor Robert Caldwell is one of 13 U.S. theoretical physicists to win the fellowship this year. 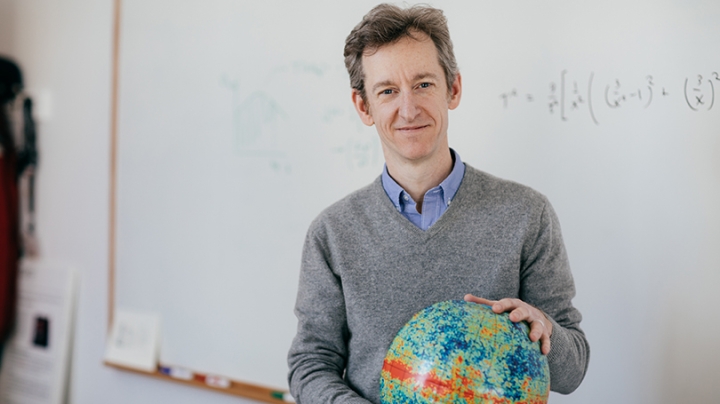 As a theoretical physicist, Professor Robert Caldwell focuses on cosmology—the branch of astronomy that deals with the general structure and evolution of the universe. (Photo by Robert Gill)
3/29/2017
Body

Professor of Physics and Astronomy Robert Caldwell has received a fellowship designed specifically to support sabbatical work. He is one of 13 American theoretical physicists to have been awarded a 2017 Simons Foundation fellowship.

Caldwell, who joined the Dartmouth faculty in 2000 and teaches both undergraduate and graduate courses, had planned a two-term sabbatical for the winter and spring terms of 2018. The fellowship will enable him to add the fall term of 2017.

As a theoretical physicist, Caldwell focuses on cosmology—the branch of astronomy that deals with the general structure and evolution of the universe. He explores questions about the basic properties of the universe, its composition, its history, and its future. He also conducts research on the physics of cosmic acceleration—the increasingly rapid expansion of the universe.

Caldwell will use his time away from Dartmouth to collaborate with colleagues at the University of California, Berkeley and the University of California, San Diego on cosmological models he has developed. “I hope to be able to test the theories I have been working on for the accelerated expansion of the universe, and the origin and evolution of the universe,” he says.

The Simons Foundation is a private foundation established in 1994 in New York City and has written that its support of sabbatical research “can provide strong intellectual stimulation and lead to increased creativity and productivity in research.”