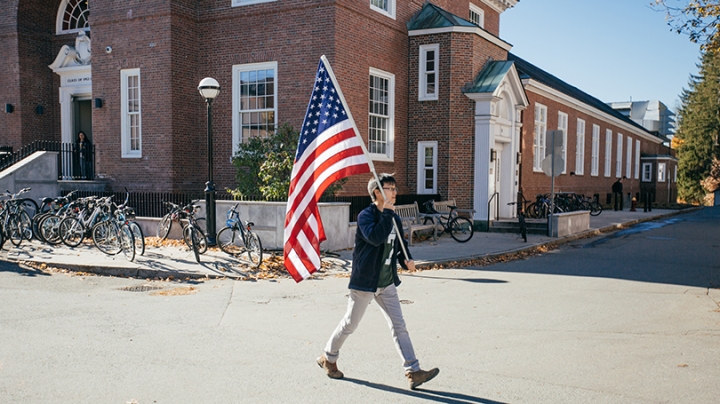 A nationwide survey of more than 1,500 political scientists rated American democracy as strong on the key principles of free and fair elections, but many of those surveyed expressed concerns over government interference with the press and only half of respondents were confident that the power of the presidency could be checked by constitutional limits.

The data was released last week by Bright Line Watch, a project designed to monitor the state of democracy in America, founded by Dartmouth government professors John Carey and Brendan Nyhan along with colleagues from Yale and Rochester universities.

The initiative came together in the wake of the 2016 presidential election, which, says Carey, the John Wentworth Professor in the Social Sciences, “taught us not to assume that the country’s political leadership will follow the practices and norms that help guarantee American democracy.”

The project’s name reflects this idea, Nyhan says. “The question that people have been asking since the election is, where is the bright line between American democracy as we know it, and something else?”

The problem is that this line is not easy to find amid the tumult of daily politics, Carey says. “It's very difficult to know when democracy's under threat when you're living in the middle of it. Because we don't trust ourselves to be able to recognize this just off the top of our heads, we thought it was important to try to plant a marker here at the very beginning of this presidency.  We have tried our best to evaluate in a really evenhanded way how American democratic institutions are performing.”

The Bright Line Watch founders are committed to examining these questions in a rigorous, scholarly way, Nyhan says. “It’s very much intended to leverage the expertise of political scientists in a non-partisan way. We have a group of scholars who have devoted their lives to studying these questions and we should try to learn from them in seeking to understand what's going on and how serious it might or might not be."

Bright Line Watch’s first task was to establish a list of essential democratic principles, as reflected in scholars’ responses to an initial survey. The Bright Line Watch team plans to use that list to monitor the state of American democracy over time, says Carey.

The respondents ranked 19 key principles of democracy, rating fraud-free elections, free speech, and protection of political opponents from government harassment as the top three markers of a healthy democracy. Restraint in political debate, striving for policy consensus, and not questioning the patriotism of opponents ranked lowest on the spectrum.

This graph shows the distribution of responses ranking the performance of the United States today on a scale of 19 factors identified as key indicators of a healthy democracy. (Image courtesy of Bright Line Watch)

“Our plan is to reexamine American democracy against this scale every three months so that a year from now we'll have a timeline. Two and three years from now, if we sustain this, we'll be able to answer with a little bit more confidence whether we’re seeing something new and unprecedented going on here, or is it just the sound and the fury of each week's politics,” says Carey.

The stress on U.S. democratic institutions predates President Donald Trump, Carey says. “The levels of polarization in Congress and the electorate are higher than we've ever measured before. The willingness to cooperate across party lines is diminished, so the foundation was already in place. Then Trump's presidency and the whole 2016 campaign brought a whole list of issues onto the table. His vows to lock up his political opponent really ring familiar to someone who has studied Latin American politics for many decades.”

Nyhan and Carey say Bright Line Watch will invite scholars of the democratic process to apply their expertise to American politics today through a series of conferences, papers, and comparative research, in addition to the regular surveys.

Project organizers are planning their first conference in the spring, hosted in partnership with the Yale Program on Democracy in New Haven, Conn., inviting scholars to present research on historical examples of democracies under threat, and comparing these with current politics in the United States. After the conference, Bright Line Watch will also commission a series of briefing papers for the website related to the work presented at the gathering.