At its March meeting, the board also announced new room, board, tuition, and fees. 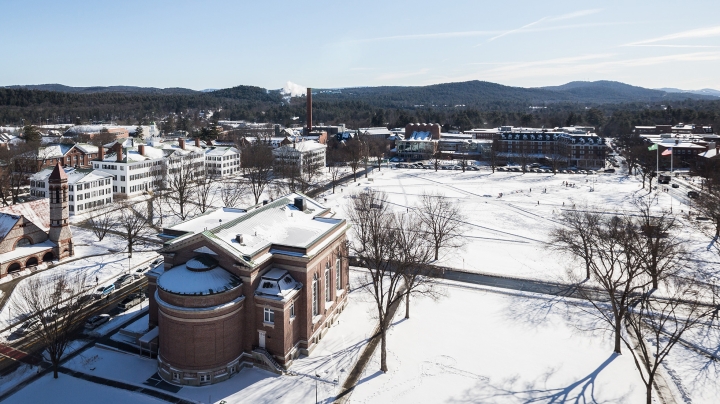 At its March 3 and 4 meeting the Dartmouth Board of Trustees discussed a wide range of issues focused on strengthening institutional excellence. The trustees heard updates on critical projects, celebrated the expertise and impact of the Dartmouth faculty, announced plans to accelerate campus planning, and reaffirmed the importance of diversity and inclusivity in the Dartmouth community.

In a presentation to the board, President Phil Hanlon ’77 highlighted recently recognized teacher-scholars at Dartmouth, including:

Board members had the opportunity to meet with new members of the faculty at a reception at the Top of the Hop in the Hopkins Center for the Arts.

“Academic excellence, the teacher-scholar model, a culture of inclusion, and this remarkable setting are the heart and soul of our community,” said President Hanlon. “Our students are incredibly fortunate to be working with and learning from such talented and motivated faculty.”

As part of an update on major initiatives at Dartmouth, Hanlon noted that the College has hired three outstanding new faculty as part of its academic cluster initiative—Professor of Engineering and the inaugural Thomas E. Kurtz Professor Rahul Sarpeshkar; Richard and Susan Levy Chair Amber Barnato; and Associate Professor of Economics Treb Allen—and that additional faculty searches are ongoing. A key component of the academic vision for Dartmouth, the initiative seeks to extend the College’s impact on the world by hiring clusters of faculty around distinct challenges and questions, with each faculty member approaching them from a different yet related discipline, forming centers of excellence and increasing opportunities for interdisciplinary collaboration, including the creation of team-taught undergraduate courses on topics of current interest.

Hanlon discussed a number of ongoing initiatives, including the Society of Fellows and the international relations postdoctoral programs, the Inclusive Excellence action plan, the Moving Dartmouth Forward plan, the co-location of the Department of Computer Science and Thayer School of Engineering, and the development of the Arthur L. Irving Institute for Energy and Society and the search for its founding director.

Hanlon outlined goals to renovate a number of aging buildings, and the board approved funds to proceed with a schematic design for the renovation of Dana Hall, the former home of the biomedical library located at the north end of campus, to facilitate the expansion and improvement of faculty office spaces.

The trustees approved a 2.9 percent increase in undergraduate tuition, mandatory fees, and room and board for the 2017-18 academic year. Undergraduate tuition will be $51,468, an increase of $1,470 over the current year’s tuition rate. Total tuition, room, board, and mandatory fees next year will increase to $68,109. The increase is consistent with the 2014 rate, which was the lowest percentage increase in tuition since 1977 and reflects Hanlon’s strategy to slow the growth of the cost of a Dartmouth education.

Board members emphasized the importance of affordability and access for all students through the continuation of Dartmouth’s generous financial aid program, noting that:

“We are committed to providing the Dartmouth experience—the transformative power of a liberal arts education—to talented students from a wide array of backgrounds and perspectives,” said Board Chair Bill Helman ’80. “A robust, need-based financial aid program is essential for enrolling the most promising students, regardless of their financial resources. The expansion of financial aid at Dartmouth now exceeds the growth of tuition.”

The trustees voted to approve Dartmouth’s 2018 fiscal year operating budget of $999 million. The board also approved a capital budget of $30 million to fund a number of projects, including the Morton Hall renovation and planning and feasibility studies of the abatement and demolition of Gilman Hall; renovations to Reed Hall and Thornton Hall; and undergraduate housing expansion and renewal.

As part of its commitment to having an inclusive and globally focused campus, the board discussed the establishment of a diversity-training schedule for its members. In December, the College announced the appointment of an external review board of experts to help evaluate Dartmouth’s progress on its plan to improve diversity and inclusivity on campus. The review board will make its first annual report to the trustees this spring.