The 2019 game vs. Princeton will be part of the College’s 250th anniversary celebration. 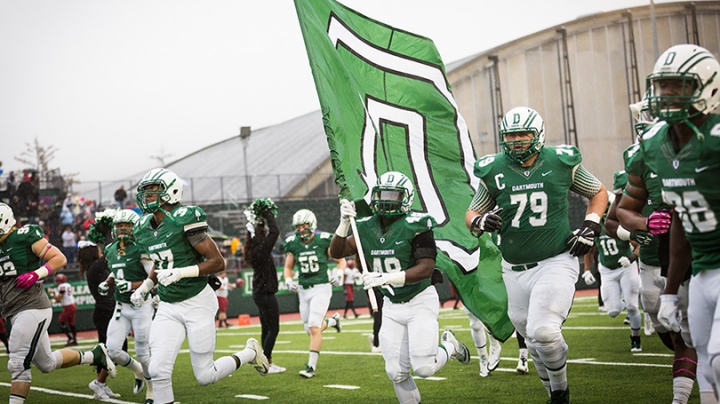 Dartmouth and Princeton University today announced that the Big Green football team will host the Tigers at Yankee Stadium on Saturday, Nov. 9, 2019, the first time for Dartmouth at the celebrated stadium. The game will be part of the College’s 250th anniversary celebration.

“We are thrilled for the opportunity to play Princeton in Yankee Stadium,” says Dartmouth Director of Athletics and Recreation Harry Sheehy. “What a great opportunity for our team, coaches, and fans. Playing in Yankee Stadium will provide a lifetime of memories for all involved. It’s especially exciting considering the game takes place during the celebration year of Dartmouth’s 250th anniversary.”

The series between Dartmouth and Princeton has enjoyed a long history that dates back to 1897 with the Big Green holding a 48-44-4 lead through the end of the 2016 season. The game at Yankee Stadium will be the 99th meeting between the two on the gridiron.

The game against Princeton will be the second of two in a three-year span for the Big Green at a Major League Baseball venue. This fall, Dartmouth will take on the Brown Bears at Boston’s Fenway Park on Nov. 10.

“This is such a terrific opportunity for us to showcase our football team and the College on the New York stage at Yankee Stadium,” says Buddy Teevens ’79, the Robert L. Blackman Head Football Coach at Dartmouth. “Our football program and the Yankees have a legacy of tradition and success, and to be able to partner with them to bring Big Green football to New York City will be an event our players and fans will never forget.”

Dartmouth has other connections to Yankee Stadium, most notably Red Rolfe Field at Biondi Park, the Big Green’s home baseball field, named after the four-time All-Star third baseman who enjoyed a 10-year career with the Yankees. Rolfe ’31 was also Dartmouth’s athletics director for 13 years (1954-67). Jim Beattie ’76 pitched two seasons for the Yankees, winning a World Series game in the 1978 championship season.